Does the Fed still see no signs of inflation? Let us help.

Maybe they should take a look to Hong Kong, where a piece of “digital artwork” that was created by a humanoid robot named Sophia, just sold for $688,888 in the form of a non-fungible token, according to Reuters.

The robot, Sophia, was unveiled in 2016 and has produced art “in collaboration” with 31 year old Italian artist Andrea Bonaceto. Reuters notes that Bonaceto is well known for his colorful portraits, including one of (of course) Elon Musk.

Sophia combines elements of Bonaceto’s work alongside of art history and “her own” drawings or paintings in a process that’s called “iterative loops of evolution”.

The piece of art that just sold was called “Sophia Instantiation,” and is actually a 12 second MP4 file that shows the “evolution of Bonaceto’s portrait into Sophia’s digital painting, and is accompanied by a physical artwork, painted by Sophia on a printout of her self-portrait.” 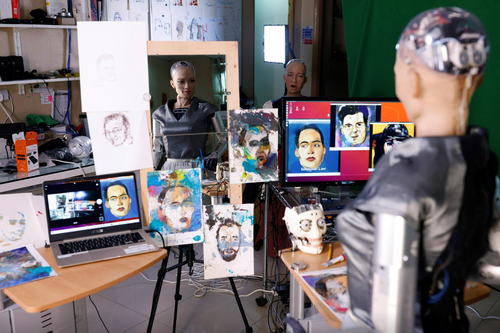 Does anyone actually know what that means? We’re asking for a friend.

Hong Kong-based David Hanson, who created the robot, said: “I was kind of astonished to see how fast it shot up too as the bidding war took place at the end of the auction. So it was really exhilarating and stunning.”

Art collector and blockchain investor Jehan Chu commented: “What we’re seeing right now looks like a bit of a bubble, especially in the NFT art world.”

And what would a bubble be if the robot herself wasn’t also interviewed by Reuters (of course). She told the media outlet: “I’m so excited about people’s response to new technologies like robotics … and am so glad to be part of these creativities.”

We’re guessing she hasn’t yet been programmed to shreik “I’m f*cking rich!” at the top of her lungs yet, or perhaps that’s what she would have said. Maybe in Sophia v2.0.