Many years ago, in December 2013, when bitcoin was still in its very early adoption phase and few had any illusions that it would ever hit $1000 let alone $40,000, two software engineers – Billy Markus and Jackson Palmer – introduced a cryptocurrency that was meant to be a payment system that was “instant, fun, and free from traditional banking fees” but was in reality a joke, and a meme spoof on the concept of bitcoin. In other words, it was a joke, even within the otherwise austere and serious crypto community. It was called DogeCoin, and was represented by a Shiba Inu dog as its logo, literally taken from the “Doge” meme. 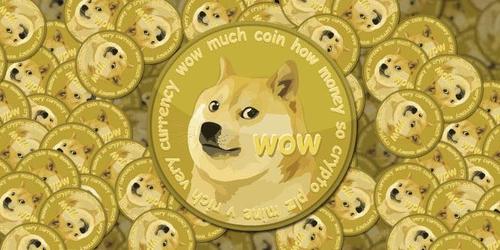 We bring it up, because moments ago, Dogecoin surpassed Litecoin in market cap, hitting $8.5 billion after rising 800% today, and hitting an all-time high of $0.082 before settling down to $0.0667, on volume that overtook both bitcoin and ethereum on binance, with some $3.4 billion dogecoins traded. 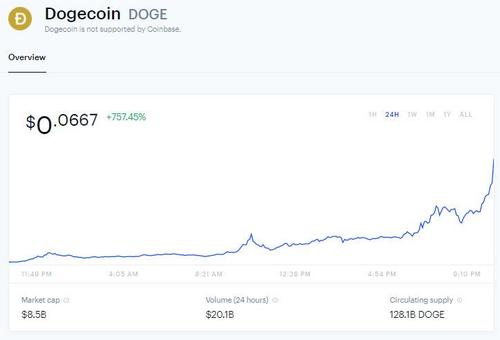 So what the hell is going on here, and why is this particular crypto soaring when the rest  of the crypto space is quiet?

Is Melvin Capital/Citadel short dogecoin and have the 5.5 million bloodhounds of Wallstreetbets been unleashed yet again?

While it is unclear what sparked the furious buying spree, according to CoinDesk, WSB is indeed involved, and the move was “likely caused by attention from public Reddit trading collective Wall Street Bets combined with a TikTok post about the “dogecoin army” by niche celebrity Carole Baskin from Netflix’s “Tiger King.”

Separately, around 5:47pm ET, Elon Musk tweeted a picture of whippet, which some believe was a to DOGE’s surge, but others note may have unleashed the heaviest part of the buying…

… with some reacting to Musk’s tweet “there’s the $DOGE tweet we’ve been waiting for… In typical @elonmusk fashion.”

Whatever the reason, this is the clearest indication yet of the absolute dash for trash momentum observed across capital markets since the Fed’s take over, with “investors” now openly mocking the asset allocation process and dumping their cash into an “asset” which even its creators admit is worthless.

While DOGE appears to have peaked and is now sliding, expect much more insanity tomorrow and the coming days as this ridiculous bubble is now prompting laughable (literally) assets to generate returns the stock market could only dream of.

The Election Fraud in Their Own Words