‘Domestic Terror’ Is A Government Without Constraints

Ruh Roh: That Unhinged Canadian Conspiracy Theory is 5-for-5 so far…

It was purportedly from an anonymous Liberal Party “Strategic Committee” leaker that laid out a plan where the Canadian federal government, in collusion with world governments everywhere, were going to use the Coronavirus pandemic to impose a New World Order, distinctly communist in nature, replacing private property with Universal Basic Income and immunity passports.

I wrote it up at the time pointing out the various holes in the narrative, not the least of which was that it was completely unsourced. You had to decide to believe something like that.

My response to him was:

I saw this months ago and kinda ripped the guy who sent it to me because it sounded very Qanon-ish and just batshit. No sources, no attributions, it could literally be anything. I hate this kind of stuff.

Next thing I know my phone is ringing, and as I plug in my earbuds I hear his thick middle-eastern accent:

“Ok junior” (he had picked up my knickname from my punk rock days nearly 30 years ago, although he was never in that scene), “bring it up and let’s just walk down the list”:

Well, here we are under lockdown in Toronto, again – and most other Canadian cities as well.

The recently announced travel restrictions we’re all aware of. All flights to Caribbean and Mexico canceled, returning citizens sent to government approved hotels, which, at least as per the media reports coming in, seem to feel more like internment camps than hotels. Joe Warmington’s article describing the plight of a returning citizen who has been locked in a hotel room and fed prison-like rations despite having had a negative COVID-19 test prior to his embarking on the returning flight…

From @joe_warmington: Bread and water in locked room during forced detention after landing at Pearson https://t.co/Ui9vlu8z6e #cdnpoli

Right, well the “casedemic” has been infuriating for anybody who actually looks at the data, who understands what a medical “case” is supposed to be or what a PCR test isn’t supposed to be. Especially when using high Cycle Thresholds.

As Chris Martenson (PhD in pathology from Duke University) outlines in the 2020 Year in Review with Dave Collum (PhD Columbia, Chemistry, teaches at Cornell): a medical “case” is one in which a patient is presenting symptoms and requires medical attention. That’s a case. PCR tests were never meant to discern whether somebody is an “infected case” or not, and as Collum elaborated in that same interview, “with a Cycle Threshold over 35, you can get a positive PCR test out of a dog’s ass”.

According to the media, this is true. According to reality, it isn’t. In CNN-style “fact checking” parlance, it would thus score as “partially true”.

“Covid Related Deaths” is a well worn catch-all. What is known to anybody keeping track: the vast majority of COVID fatalities are with COVID, not from it. We all know this,  for some reason it doesn’t seem to matter. The overall survival rate for this thing is somewhere around 97% or higher. Most people don’t know anybody in their immediate circle of friends and family that have actually died from it.

It can be terrible virus to catch and become sick with, and it’s tragic to die from. But the majority of people either exhibit flu like symptoms and shrug it off or remain completely asymptomatic. Overall it causes fewer fatalities to society than either alcohol (3 million deaths per year, globally) or driving (1.5 million) or for that matter air pollution at 4.2 million.

Travel restrictions, as we noted, are here, or at least starting to show up. My unemployed CEO friend is expecting localized roadblocks, i.e “Where are you going? Why are you going there? Can I see your immunity passport and contact tracker please?” type roadblocks. Unless you’re a politician or someone Transport Canada deems to be exempted in “the national interest”, you’re probably stuck where you are for the foreseeable future.

Well they aren’t calling it COVID-21, but there is a lot in the media about the UK and South African mutations. Overlooked is that COVID-19 has been mutating from very early on, all viruses do. Everything does. 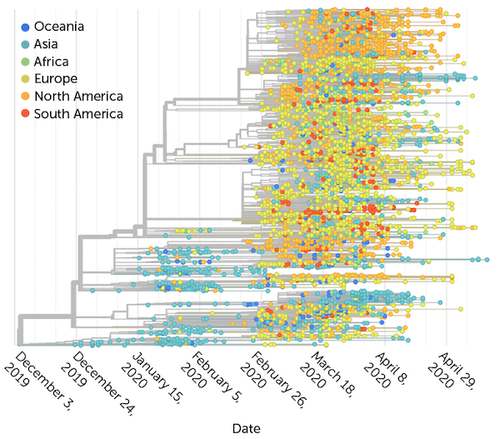 From: Is the coronavirus mutating? Yes. But here’s why you don’t need to panic, Science News, May 2020

Anyway, by the time we got this far down the list I felt the mild caffeine euphoria of my morning cup-o-joe wearing off and despondency setting in… I know where this list goes from here:

I take some comfort in that the original article has been written so poorly that it makes 4chan a more likely origin vector and not some high powered political insider.

But the entire conversation made me feel uneasy, here’s why:

As I stated the first time,  when something is completely unsourced and disconnected from supporting material or citations, believing it is a choice. It’s an act of faith. You can choose to believe that we’re in The End Times,  or that The Singularity is Near, Alien Disclosure is imminent, or we’re entering the final victory of World Communism or a final Malthusian or climate driven collapse. These narratives are at their core eschatological in nature and all the same . We won’t be able to say with any certainty until one of these scenarios would actually come to pass. Even then we’d probably be incapable of forming a consensus around something that had already occurred. 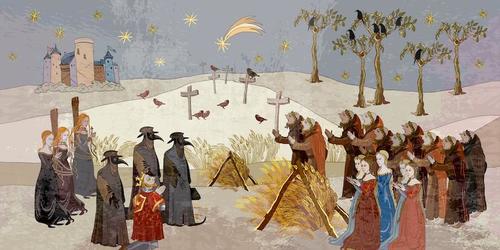 One of things that I’ve really had a hard time grappling with since all this began came out of my introductory study of General Semantics. Facing the reality that none of us really knows anything and that we only think we know is so much harder than just stumbling through life dead certain about your assumptions and oblivious to your own ignorance and biases. At least that way you just bounce around between successes, failures and misadventure but at least you think you’ve got things under control or at least understand what is happening.

None of that is true, and when you realize that, it can be terrifying.

All the more so because when I think about a crazy, unhinged conspiracy theory like this one, the reasons why I would normally dismiss it: that it was just somehow untenable for governments anywhere to just rescind everybody’s civil liberties and basic human rights at the stroke of a pen with zero due process, no constitutional basis, no public consultation, no legal review or any right to appeal. When I think about how things have played out over the past year,  I realize that these assumptions weren’t actually anchored to anything.

These days I’m reading Marco Papic’s Geopolitical Alpha, and in it, his core premise, is this:

Said differently, a lot of capital gets allocated on what people think governments want to do, but what actually matters is what is preventing or constraining the government from doing what they want to do.

The five big constraints on governments are: political, economic, financial, geo-political and legal/constitutional.

Seen in this light, even if true, that governments wanted to impose a totalitarian communist regime globally, surely they are constrained from doing so. Right? RIGHT? They can’t just fscking do it.

But… all kinds of things I thought governments couldn’t just come out and do over the last year…. well they just came right out and did it. And just to really mess with my head, Papic added two wildcard constraints to his list: terrorism and pandemics.

The problem is, those wildcards, they aren’t wildcard constraints – they’re wildcard enablers. Those two wildcards seem to have the ability to trump all normal constraints. Every one of those constraints went out the window because of the wildcards.

Where does that leave us?

Speaking for myself, I’m losing my moorings as I no longer have any clear idea what, if any, policy constraints exist anymore.

So I have no grounding in the arena of what’s possible, how arbitrarily policy makers can act, what’s to stop them from simply confiscating my wealth (except for my crypto), or nationalizing the business I’ve built up over 22 years, and doing the same to everybody else. This is Canada. We’re generally meek as fuck here.

Second passport and expat strategies won’t work if, as per the “World Debt Reset Program” outlined in the conspiracy theory, this happens simultaneously everywhere. Granted that seems farfetched, but the boundaries of the word “farfetched” have shifted dramatically since all this began.

The question I keep coming back to is “What’s to stop them from trying it?”

One of my first articles that I wrote on my old blog said that:

“The ultimate goal of the State is to cultivate absolute dependency on it by its subjects. This is because until this happens there is a real danger that those governed will one day wake up and realize that the State is not only entirely unnecessary but actually malignant; a malevolent force actively impoverishing society to the benefit of it’s elites”

I think nation states do know this, and that the continuous iteration of failed policies painted all of them into a corner vis-à-vis the global economy and the financial system as we know it. As Daniel Dimartino Booth observed in a recent George Gammon podcast, (paraphrasing) “The central banks were screwed. They needed something like COVID because the financial system was coming unglued”.

Understanding that there is a real incentive for nation states to move in a drastic direction, combined with a conspicuous absence of restraints, is taking a huge psychological toll on the populace. As hypernormalization runs wild, a type of mass psychosis sets in which has been manifesting in rabid polarization, hysterical cancel culture, Reddit-driven stonk manias and myriad tribes of neo-Flagellants.

Something’s gotta give, but at the same time, I’m really worried that something’s about to give.

Marx’s 5th Plank: What You Need To Do As The Fed’s Credibility Evaporates

Powell Just Said US Economy Has To Add 500,000 Workers Every Month Or He Won’t Hike