Walking a tightrope – in high heels

The first part of today’s punchy title isn’t mine: it belongs to our Brazil macro-strategist Mauricio Une, who underlines in his recent note (see here) that Brazil is still on the edge of the (fiscal) abyss: it isn’t being helped by US yields continuing to rise, making emerging market assets less attractive; and domestically, there was “increased volatility boosted by rumours over the risk of relaxation of fiscal rules” during a Senate vote. That was before we got news that the Brazilian Supreme Court stunningly decided former leftist president Lula is not guilty of the corruption charges he was convicted of in 2018, and is suddenly free – to contest the 2022 election on what will no doubt be a more fiscally expansionary platform than the far-right populist-but-fiscally-conservative President Bolsonaro. As one local political analyst describes it: imagine Bernie Sanders vs. Donald Trump. Which actually doesn’t require that much imagination right now most places.

Just to put in perspective what this kind of backdrop can mean for key EM, BRL was trading at nearly 5.0 in December: it’s 5.81 at time of writing and if it breaks 5.8860 then it is at a new record low with the US Fed still in blackout and seemingly refusing to act anyway, and with a whole new election cycle to look forward to. What roaring fun the “post-Covid” 20s are proving already, eh?

Don’t look now but even the Chinese currency is slowly starting to move. It’s broken through its 100-day moving average at 6.5282 after sliding all of 0.6% last week (The horror! The horror!) And that’s despite a 60.6% y/y increase in exports. To repeat, the Fed are on blackout. 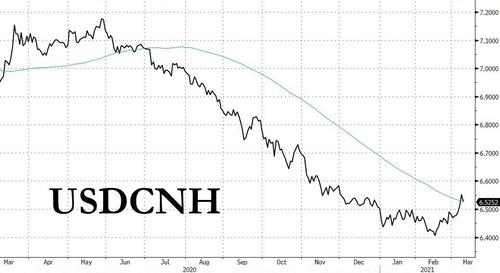 Think US yields can’t move higher than this, moving other things with them? As Bloomberg notes today, pure economic forecasts (Remember them? They were a simpler time…) suggest that nominal US GDP growth will –briefly– hit a high of 7.6% ahead due to all the sugary Biden stimulus. On the back of *that*, the gap between US nominal GDP and the US 10-year will be at the widest since 1966. The risks must be near term that yields rise to meet nominal growth, even if the longer term (and perhaps not even that long) it is growth that will come down and again, taking yields with it. What do the Fed have to say? That’s right, nothing. They are on blackout.

Elsewhere, in searing analysis (of the kind this Daily managed to get out in a single bullet point 24 hours earlier), Bloomberg notes “China Entrepreneurs Feel a Chill From Jack Ma’s Fall From Grace”, which is the story that appears when you click on the *actual* headline “Jack Ma Crackdown Risks Backfiring on Xi’s Master Plan for Tech”. Do recall that if that tech master plan fails –and it won’t have much foreign help this time– then the foundations of sustainable high growth do too. All that would be left would be empty homes, overbuilt infrastructure, excess industrial capacity other economies won’t absorb, and massive debts in all sectors. You think CNH is moving now?

Not that it’s only the Chinese tech sector feeling chilly. Yesterday saw US tech stocks slammed as investors decided that perhaps what was a no-brain buy a few weeks ago is now a no-brain sell – or just has no brains at all. Other US stocks managed to fill the gap, just as they did back in 2001(!), which will prevent the Fed from having too many kittens off stage for now, but you can imagine that if tech selling continues much more, that they will be screaming in their self-imposed cone of silence.

So China and the US both converge and diverge. Indeed, it is clear which one of the two is more pedal to the metal in current stimulus, and which is suddenly trying to be prudent. Just before publication today the PBOC announced it will keep growth of both money supply and aggregate financing broadly in line with that of nominal GDP. This is **STAGGERINGLY** contractionary given the last 12-month rolling aggregate financing figure was 35% y/y, the series average back to 2004 is 15%, and the most optimistic nominal GDP print one could expect would be 9% – and even that only for 2021, with something far lower further out. It seems there is going to be an aggressive crackdown on leverage – and growth will follow. And then so will global growth with a lag. And so will the likes of AUD, etc.

Of course, something needed to be done as China’s consolidated fiscal deficit is a staggering 18% according to the IMF, far worse than Brazil, and debt is skyrocketing in all sectors. But this is likely to have severe consequences – unless the PBOC fails to match deed with word. On which note, the PBOC is also saying it will not allow competitive CNY depreciation – but it will push ahead with further convertibility and opening up at a time when US yields are surging. Do the math yourself there, folks: you think CNH is moving now? The US is playing fiscal catch-up and markets have been blind-sided for the nth time in that this pushes up US yields, and that pushes up the USD rather than squashing it. Just imagine how high the USD could get if such fiscal stimulus were being spent on things that were long-term productive and not short-term sugary!

Meanwhile, the British have found a new way to tear the fabric of their society in two. Brexit is passé; Scotland potentially voting to leave is perhaps in the hands of whether the First Minister of Scotland helped try to frame the former First Minister of Scotland or not; and so now we have ‘Team Meghan’ vs. ‘Team Queen’, which some UK observers see as having the potential to destroy the British monarchy. The obsessed UK press shows, like the other two issues, this represents a generational divide: over 40s see Harry and Meghan as whining multimillionaire narcissists with an income stream from Netflix of USD100m, who just got paid another USD7m to do a country-splitting TV interview; under 40s sympathize with a young couple struggling against an out-of-date, no-longer-fit-for-purpose institution. More walking of tightropes in high heels, it seems.

Don’t think Europe gets off lightly today. The European Commission (EC) is “tired of being the scapegoat” for the slow rollout of vaccines, says Ursula von der Leyen. “Not as tired as we are of your slow vaccine rollout”, says the EU. Italy, under market favorite Mario Draghi, has already blocked vaccine exports to Australia, who rather than haggling over the price and legal liabilities like the EC did, just paid for them in advance. That doesn’t matter when the factory making them is in Italy. Now VDL is suggesting vaccine exports from private firms located in the EU will be blocked to other locations too until the EU gets all that it wants. Way to reinforce the EU’s commitment to the liberal international trading order, guys! The EU is also asking the US for vaccine – the same US it is snubbing on foreign policy fronts such as China and NordStream2. Way to reinforce one’s “open strategic autonomy”, guys! One can almost hear the sound of heels on taut, high wire.

At least EUR is slumping – which the ECB will be delighted about because yet again it can piggy-back on other economies’ reflation efforts without having to face up to the fact that its own have been a failure. Just don’t tell them what the PBOC just did.