Update (1245ET): Phew! A White House official has confirmed that President Biden, after stumbling aboard Air Force One on his way to Georgia, “is fine.”

May we humbly suggest this addition? 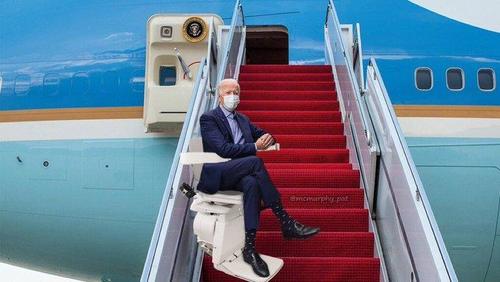 We hear they are free to install under Medicare-for-All.

How is President Biden supposed to negotiate with China when he can’t even negotiate a set of stairs?

After a brief tour through the South where he stopped in Georgia to meet with leaders of the Asian-American community in the wake of this week’s deadly shooting at a spa and massage parlor in Atlanta, Biden and his entourage returned to Air Force One.

Kamala Harris realizing she’s about to be President: pic.twitter.com/7WtiPCy8nT

WATCH: US President Joe Biden falls over as he boards Air Force One pic.twitter.com/O8XysfH4n4

The clip immediately went viral after finding its way to Twitter, as online wits joked about the timing (coinciding with the conclusion of a US-China summit where China’s aggressive posture made headlines).

Biden just fell going up the steps to Air force One… pic.twitter.com/MT8kpX1huH

I added music to Joe Biden falling up the stairs to Air Force One. pic.twitter.com/3mHuaWUWh7

👀 Biden cannot even negotiate a stair case, how is he going to negotiate with china?

Biden takes a big fall climbing into Air Force One.

We know who is to blame for the fall of course…

CNN “ Donald trump puts banana peels on the steps of air force one to try and purposely trip joe Biden. “

It’s not exactly a vote of confidence, coming just hours after he mistakenly referred to his Veep as “President” Harris. Fortunately, an aide to the president confirmed that he was “doing fine” after the spill.

He’s literally incapable of getting even the basics right. #PresidentHarris pic.twitter.com/FlempiyA22

FLASHBACK -> Biden mocks Trump’s ramp walk at West Point and claims he’s stronger: “Look at how he steps and look at how I step. Watch how I run up ramps and he stumbles down ramps. Come on.” pic.twitter.com/U7CL0dBSQA

We’ll give the final word to Don Jr who, as usual, sums up the farce perfectly: “I remember the press bashing Trump for touching the rail once. Biden falls repeatedly but I’m sure he’s the picture of health. No wonder all our enemies are pouncing simultaneously and mocking him publicly. “

REPORT: Georgia Secretary of State Brad Raffensperger Neglected to Protect Georgians By Allowing Dominion Voting Machines in Elections – He Didn’t Prevent Fraud – He Provided for It