Authored by Thomas Lifson via AmericanThinker.com,

The relentless campaign to demonize supporters of President Trump entered the realm of self-parody this past week, with warnings that the US Capitol and democracy itself were in danger on March 4 because QAnon saw that date as the real inauguration day. It was all balderdash, a PsyOp aimed at delegitimizing support for Trump or questioning the integrity of the presidential election.

Even the Washington Post admitted there was nothing to it, calling the reports a “mirage.”

At the Capitol, a March 4 threat from militant Trump supporters proves a mirage https://t.co/pHUgunuHEN

This is too kind, for mirages are genuine phenomena, a product of the physics of light. This bogus warning was entirely the product of human intentions, not the result of impersonal natural forces. And it amounted to the worst sort of propaganda, intended to demonize a group based on lies, by fanning the flames of panic.

But Speaker Pelosi eagerly cancelled voting Thursday because of the bogus threat. This freed up Representative Al Green, a Democrat from the Houston area, to undertake a stunt of surpassing stupidity that was taken with deadpan seriousness by much of the media. The DC insider publication, The Hill, bought into the stunt:

Rep. Al Green (D-Texas) is sending a message to QAnon and right-wing extremist threats by sitting on the Capitol steps on Thursday, the date authorities warned militia groups were potentially planning another breach of the building.

“I want to make a statement to let people know, those who would threaten those of us who cherish this freedom that we have here that we refuse to allow those threats to negate our freedom,” he told The Hill.

Green himself touted his bravery:

I love my country and believe that freedom is not free. Others have made great sacrifices for the freedoms I enjoy. I refuse to surrender our nation’s Capitol to those who would abridge my freedom. Hence, as a matter of personal principle, I will be in the Capitol complex today.

And a heroic-looking picture of him went out to social media: 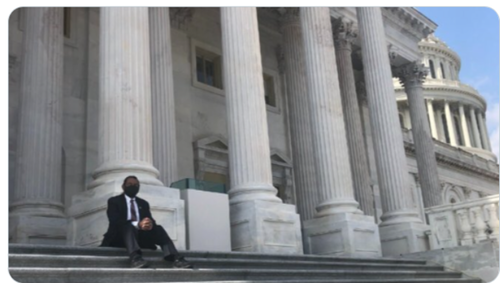 The only problem is that Rep. Green was sitting behind a large protective cordon, including National Guard troops and fencing, facing no danger, even if the phony insurrection reports had been true. 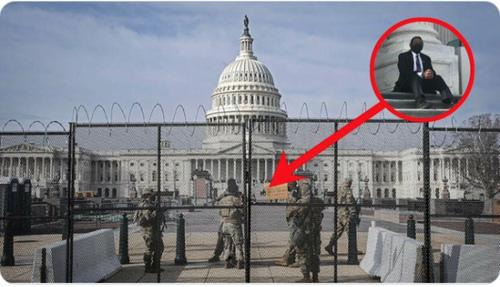 Ninety percent plus of the population will never see the broader picture. The propagandists control what most people see, and are all too effective in their theatrics.

Tucker Carlson called them out in his introductory segment Friday. It’s worth watching here.

GDP Hides The Damage From The COVID-19 Lockdowns