Authored by Frank Fang via The Epoch Times,

China accounted for about 51 percent of counterfeit or substandard COVID-19-related products seized by U.S. customs officials from October 2019 to Sept. 30 last year, according to a newly-released report from the U.S. Customs and Border Protection (CBP). 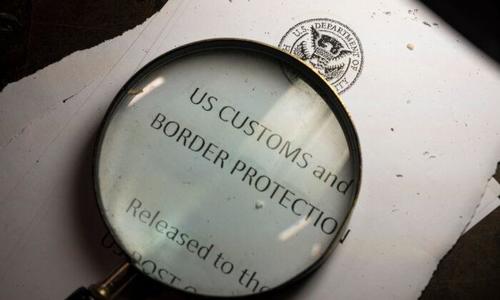 Among the products seized by U.S. customs officials were over 12.7 million counterfeit masks, 177,356 COVID-19 test kits prohibited by the U.S. Food and Drug Administration (FDA), and 38,098 FDA-prohibited chloroquine tablets.

The effectiveness of the anti-malarial drug hydroxychloroquine and its closely-related chloroquine in treating symptoms of COVID-19, which is caused by the CCP virus (commonly known as the novel coronavirus), is of much debate.

The FDA initially issued an emergency use authorization for the two drugs, but later revoked the authorization in June last year, saying that they were “unlikely to be effective in treating COVID-19.”

The FDA currently has a database listing fraudulent COVID-19 products, including test kits. The list contains company names and the names of their products.

In December last year, customs officials in Cincinnati seized 10,080 counterfeit surgical masks, which were labeled “3M Mask Model 1860,” in a shipment originating from China, according to a press release. The boxes containing the masks were fraudulently labeled as “Made in the USA.”

If genuine, these fake 3M masks would have an estimated manufacturer’s suggested retail price of $65,520.

CBP officers in Cincinnati made a significant seizure of counterfeit masks that were packaged advertising protection against communicable respiratory diseases. Officers seized the 21 shipping boxes that contained over 10K counterfeit mask.https://t.co/L0x1I1qaXF pic.twitter.com/2irnkDArZ6

Another seizure took place in Chicago in September last year, when local customs officials stopped a shipment containing 500,000 counterfeit N95 masks. These masks were determined to have an estimated retail price of $474,905, if genuine. The shipment originated from the southern Chinese city of Shenzhen and was destined for a company in Manalapan, New Jersey.

The CBP report also mentioned that customs officials issued a record number of 13 new withhold release orders, banning the imports of products made with forced labor, in the 12-month period that ended on Sept. 30, 2020.

Most of these targeted products—including disposable gloves, seafood, and cotton—originated from China. Together, these products were valued at nearly $50 million, according to the report.

Beijing has detained more than one million ethnic Muslims, including Uyghurs, Kazakh, and Kyrgyz people, in internment camps in Xinjiang. Detainees are subject to forced labor, torture, and political indoctrination sessions. Beijing claims these camps are “vocational training centers.”

In August last year, a U.S. company was fined $575,000 for importing stevia powder and derivatives there were made by prison labor in China. Several months later, in October, CBP asked all U.S. ports to seize stevia products made by an Inner Mongolia-based company, after evidence showed the company used convict, forced, or indentured labor to manufacture the products.

“Currently, CBP is enforcing 44 active withhold release orders and seven active findings,” according to the report.

Finally, the report concluded that CBP officials seized a total of 26,503 shipments with products found to have violated U.S. intellectual property rights, with China being the “top source” of such seizures. These products would have a total estimated manufacturer’s suggested retail price of over $1.3 billion.

In December last year, customs officials in Los Angeles seized three cargo shipments from China containing counterfeit products that could be worth over $32 million. Among the seized fake products were one million knockoff Viagra pills, footwear, belts, purses, and headphones.

Counterfeit toys from China that could be worth about $1.3 million were also seized at the Port of New York/Newark, the CBP announced on Dec. 21 last year.