Authored by Dylan Grice via TheMarket.ch,

The Boston Herald reported in May 1924 that a police officer, upon seeing a man groping around the pavement on his hands and knees, had asked for an explanation. «I lost a $2 bill down on Atlantic Avenue», obliged the man. «Then why are you hunting around here in Copley Square?» The man paused and turned his gaze upwards towards the officer, «because the light’s better up here».

The so-called «streetlight effect» is now a well-documented phenomenon. According to Wikipedia, it «is a type of observational bias that occurs when people only search for something where it is easiest to look».

We feel it an apt description of modern central bankers’ narrow fixation with the Consumer Price Index (CPI), driven not by any richness of information relating to the economy’s «overheating», but because it’s easy.

Stimulus today is excessive and credit conditions loose in part because central banks are relaxed towards the risk of CPI inflation. On this they might be right. But they are similarly relaxed over obvious signs of overheating in financial markets, and on this we are sure they are wrong.

The historical precedents we explore below do not bode well.

We think it likely that we’re in the foothills of a policy mistake of epic proportion which will have potentially devastating consequences.

Before explaining why though, let’s first remind ourselves of the Fed’s current thinking. Jerome Powell was recently asked by Harvard’s Greg Mankiw on CNBC’s Squawk Box about how the Fed were thinking about the risks of inflation. The answer was comprehensive and is worth reproducing almost verbatim:

«The big picture is still that we’ve seen … three decades, a quarter of a century, of lower and more stable inflation and we’ve seen really the last decade be characterized by global disinflationary forces and large advanced economy nations struggling to reach their 2% inflation goal from below. So that, I think, is the broader setting.

In addition, the pandemic itself has produced lower inflation readings … as we look forward we’ll probably see an increase in readings but that’s really not going to mean very much, it won’t be very large or persistent in all likelihood, it’s just a function of those readings falling out … if the economy reopens, there’s quite a lot of savings on peoples’ balance sheets, there’s monetary policy, there’s fiscal policy, you could see strong spending growth and there could be some upward pressure on prices. Again, though, my expectation would be that that would be neither large nor sustained…

We have had inflation dynamics in our economy for three decades which consists of a very flat Phillips curve, meaning a weak relationship between high resource utilization, low unemployment and inflation, but also low persistence of inflation, critically … of course those dynamics will evolve, but it’s hard to make the case why they will evolve very suddenly, in this current situation.

Powell and other members of the FOMC have said they don’t expect to tighten policy «any time soon». According to Chart 1, which plots the expected policy rates, markets believe him. He describes the new framework as «a patiently accommodative monetary policy that embraces the lessons of the past» namely, that policy has been tighter, and so employment lower than was necessary because economists were overestimating inflation risk. He seems determined that there will be no such error on his watch. 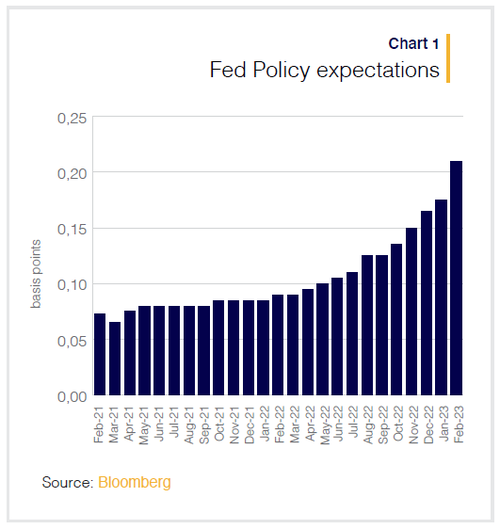 The Calderwood Capital reading of history

We predict a different error, that of focussing so exclusively on the CPI that harder to interpret indicators of building financial risk are ignored. We believe history is on our side given it is an error economists have made repeatedly. Indeed, one of the original architects of the idea that the stability in the CPI was a necessary and sufficient condition for stability in the economy was the economist Irving Fisher, who first articulated his plan for stabilizing the price level in 1913, the year of the Fed’s creation.

Not coincidentally, that was the very same Irving Fisher who would later predict that stock prices had «reached what looks like a permanently high plateau» just nine days before the Great Crash of 1929. And in this context one can clearly understand the man’s optimism. After all, in preceding years, CPI inflation had exhibited precisely the kind of calm, reassuring steadiness which Fisher’s theories predicted would guarantee economic, and even social stability (Chart 2). 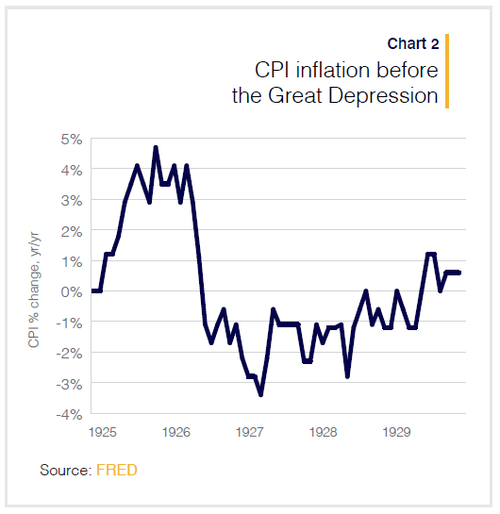 As the stock market continued its plunge, therefore, poor old Fisher doubled down. It was merely «shaking out the lunatic fringe» he reassured anyone who would listen. «Security values in most instances were not inflated».

A little-known backdrop to the 1920’s «Go-Go» years is that the Federal Reserve was then embarking upon a policy experiment. The growing consensus amongst economists, both in the United States and abroad, largely influenced by Irving Fisher’s ideas, was that central banks should focus entirely on delivering CPI stability. In 1925, the then-head of the Federal Reserve of New York, Benjamin Strong, wrote privately that: «It was my belief, and I thought it was shared by all others in the Federal Reserve System, that our whole policy in the future, as in the past, would be directed towards the stability of prices, so far as it was possible for us to influence prices.»

The years of 1926 and 1927 witnessed the so-called Stabilization Hearings before the House Committee on Banking and Currency, which discussed amending the Federal Reserve Act to, among other things, «assist in realizing a more stable purchasing power of the dollar».

During the hearing, Governor Strong was asked whether the Federal Reserve Board could «stabilize the price level to a greater extent» than in the past. He replied: «I personally think that the administration of the Federal Reserve System since the reaction of 1921 has been just as nearly directed as reasonable human wisdom could direct it towards that very object.»

Congressman Strong (no relation to Benjamin Strong) agreed: «Governor Strong has convinced every member of this committee . . . that the Federal Reserve is now properly trying to bring about stabilization of the financial condition of the country, and I believe they have been doing it satisfactorily for several years.»

John Maynard Keynes himself was convinced of the wisdom of the new philosophy, hailing «the successful management of the dollar by the Federal Reserve Board from 1923 to 1928» as a «triumph» for currency management. Unsurprisingly, perhaps, Keynes failed to see the crash coming with any more clarity than Fisher had.

A detached observer would have thought that, in light of the crash of 1929 and all that followed, the experiment would have been declared a failure, and Irving Fisher a bedlamite. But economists are a strange bunch. The need to narrowly focus on price stability remains at the core of the central banker’s self-narrative, and Irving Fisher has gone down as one of the greats.

Too little attention given to policies preceding the crash

Of all the retrospectives on the 1930s Great Depression, most have focused on the aftermath of the crash, and in particular the tightness of monetary policy which likely exacerbated it, but few seem to have given much thought to the policies which preceded the crash, or the extent to which those policies where responsible for its subsequent savagery. This is probably why the mistake was repeated.

In June 1999, as the Nasdaq bull-run was turning into a euphoric parabolic, then-Fed Chairman Alan Greenspan soothed growing concerns thus: «It is … up to us at the Federal Reserve to secure the favourable inflation developments of recent years and remain alert to the emergence of forces that could dissipate them. For, at root, it has been the remarkably quiescent inflation that has provided the favourable financial conditions and stable economic environment in which businesses have been able to function most efficiently … [and] in the event, the performance of the American economy over the past seven years has been truly phenomenal.» 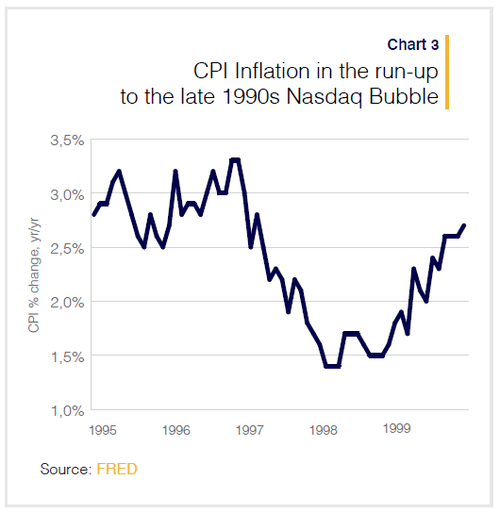 There was no bubble according to Greenspan, only prosperity. Replicating the thought process of Fisher seventy years earlier, the possibility that the Fed were stimulating a mania wasn’t even entertained. How could monetary policy be too loose when inflation was so low? 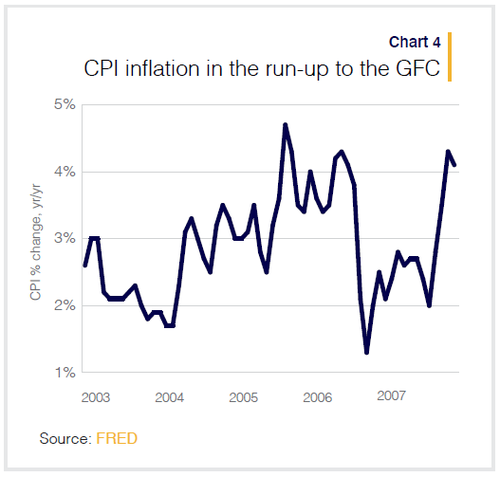 Only a few years later, in 2006, as a grotesquely inflated U.S. housing market was already rolling over, beginning a descent which would lead to a generational global economic collapse, Ben Bernanke was famously oblivious to the risk: «The effect of the troubles in the subprime sector on the broader housing market will likely be limited, and we do not expect significant spillovers from the subprime market to the rest of the economy or to the financial system.»

Bernanke had acquired the nickname Helicopter Ben after a speech pointing out – correctly – that in most circumstances, there was no limit to the inflation a central bank could create.

He was keen to demonstrate to the politicians who had appointed him that there was no substance to the monicker and the first thing he tried to do when he took over the Chair of the Fed was show that he was no dove. He’d been watching the CPI index like a hawk in the run-up to the Global Financial Crisis, but all that focus on the CPI gave him scant warning of the menace which was building in the financial system, or the calamity which was to follow.

To this day then, economists remain willing to use CPI inflation as some kind of proxy for financial stability. So long as there’s no CPI inflation, shout their actions loudly, we have nothing to worry about.

Benjamin Strong did it in the 1920s, Alan Greenspan did it in the 1990s, Ben Bernanke did it in the mid-2000s, and Jerome Powell is doing it today. He outlined the Fed’s new policy framework at Jackson Hole last August. Low inflation would be treated as the green light for monetary policy to be kept sufficiently loose for jobs to be created in
disadvantaged communities.

We wrote in September: «We don’t question the laudability of these aims. We do question the degree of know-how presumed to achieve them. Particularly when the new ‹big idea› being rolled out for battle is … er, lots of monetary stimulus, albeit in larger and longer dosages. It doesn’t seem very new, and so we expect the same old consequences. We remain broadly bullish of risk-assets, and concerned about future bubbles.» 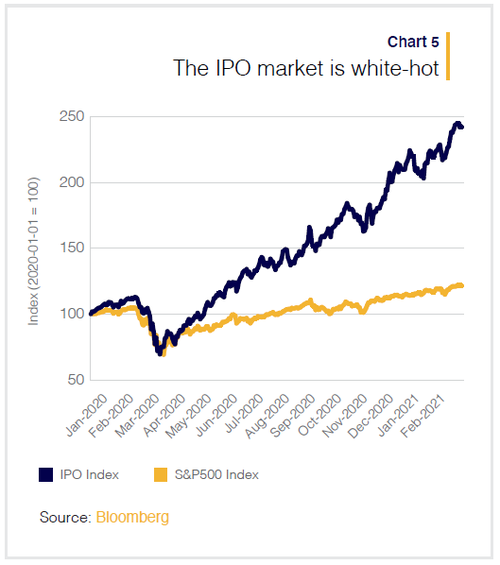 Everything, it seems, is hot. 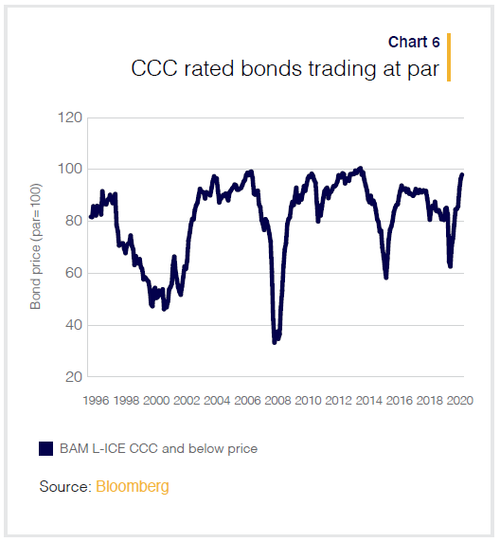 Except for the CPI, which is cold. And that’s all that matters for the Fed. It’s not interested in the distortions in financial markets. It’s just interested in the CPI indices, and those indices are conveniently convincing them that everything is just fine…