We have already seen aggressive jawboning from the likes of BOJ and RBA (which boosted its YCC bond purchases in an attempt to halt the blow out in 3Y yields) in hopes of containing the bond rout seen this week. Then, this morning Greece’s central bank head Yannis Stournaras became the first European Central Bank policymaker to openly call for increasing the pace of ECB bond purchases to stem a rise in borrowing costs, Reuters reported.

With euro zone bond yields set for their biggest monthly rise in three years, the ECB is under some pressure to make good on its promise to keep borrowing costs easy for the coronavirus-stricken bloc through its Pandemic Emergency Purchase Programme (PEPP).

“In my view, there is an unwarranted tightening of bond yields, so it would perhaps be desirable for the ECB to accelerate the pace of PEPP purchases to ensure favorable financing conditions during the pandemic,” Stournaras told Reuters in an interview.

“In my view there’s no fundamental justification for a tightening of nominal bond yields in the long end,” the Greek central bank governor said.

Stournaras said ECB policymakers should instruct the Executive Board, which runs day-to-day business including bond purchases, to intervene accordingly when they meet on March 11. And if yields indeed keep rising, that just may happen.

Stournaras added that they may also alter the ECB’s policy message “slightly”, although he said no material change was needed as the central bank still had almost 1 trillion euros left to spend in its PEPP arsenal.

In response, Germany’s 10-year bond yield, the region’s benchmark, fell to its lowest for the day at -0.287% after Stournaras’ comments. Still, it was still set for its biggest monthly gain since January 2018, however, with a 24 basis point rise. 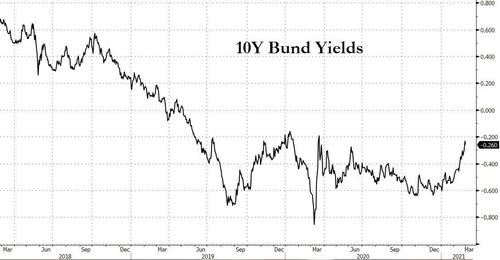 “This is a big shift from the message we have been used to and it remains to be seen whether other ECB members share the same view,” said Divyang Shah, global strategist at IFR Markets. Earlier on Friday, ECB board members Philip Lane and Isabel Schnabel had said bond yields warranted monitoring but stopped short of calling for more purchases.

For those confused, here is what’s going on” when a flood of monetary policy finally triggers the inflation central they have been demanding for years, they want to add even more money to counterbalance it’s effect. Yes, this is considered high economic thought these days.

That will change, of course. While the current rate scare may be over for now, yields will resume their march higher in the coming weeks and months, and at that point it will be only a matter of what level on the 10Y TSY, or Bund, or JGB is the “max pain” for central bankers before they all launch global coordinated YCC… at which point the last trace of price discovery will be forever gone.