After three weeks of consecutive disappointments from the ECB (see here and here), when the central bank would purchase fewer bonds in the open market via QE despite jawboning its readiness and eagerness to purchase more, and then making it official two weeks ago when the ECB formally announced it would conduct purchases under the PEPP at a “significantly higher pace”, Christine Lagarde’s bank finally delivered on its promise to boost the pace of emergency bond-buying to offset the economic threat of tighter financial conditions from higher yields.

The ECB revealed today that net purchases settled last week (through March 17) jumped by €21.1 billion, up from €14 billion the week prior and the most since the start of December (the figure is reduced by redemptions, with the the gross value of purchases set to disclosed on Tuesday). According to Bloomberg, the latest weekly purchases were higher than the €18 billion weekly net average since the program started last year. 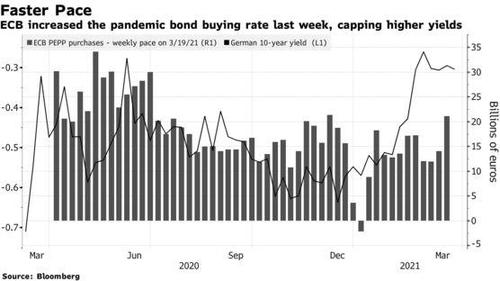 This suggests an increase in the PEPP pace following the March ECB meeting of around €5bn/week, according to Goldman analysts who notes that a more precise assessment will emerge through time, as weekly data is partial and can be distorted by undisclosed reinvestment flows. Goldman expects net purchases to run at an elevated pace of €20bn/week through Q2 and to gradually fall thereafter. In the meantime, they believe that policy intentions will be conveyed by ECB communication rather than weekly financial statements.

“We again caution against over-interpreting weekly data points, as they remain a noisy signal of policy intentions, especially since both ECB President Lagarde and Board Member Schnabel have underscored that the PEPP pace should be assessed over longer horizons” Goldman’s Sven Jari Stehn wrote in a note to clients. Going forward, he expects a relatively inertial week-to-week net purchase pace in Q2 “and a gradual reduction of the purchase pace after a reassessment at the June Governing Council in conjunction with fresh inflation projections; in the meantime, we look to ECB communication as the clearest signal of policy intentions.”

The acceleration in debt monetization was widely expected after the ECB’s recent announcement, when the central bank decided to significantly increase buying under the program – due to run for at least another year – after a global bond sell-off spurred by reflation bets because of massive U.S. fiscal stimulus.

The faster purchases came after weeks in which traders and bank officials expressed concerns about rising rates, yet official data showed no sizable or sustained pickup in buying. As Bloomberg notes, “officials fear that Europe’s extended virus lockdowns and a slow vaccination rollout mean it isn’t ready to cope with higher borrowing costs.”

Commenting on the acceleration in QE, Bloomberg economist David Powell said that “the new pace of purchases may be enough to prevent bond yields from rising further, but it’s unlikely to reverse the recent increase.”

Sure enough, the report had little impact on market rates with German bunds holding marginally higher on the day, with 10-year yields dropping one basis point to minus 0.31%. Those on their Italian peers were steady at 0.66%, with the spread between the two hovering above this year’s lows. The euro rose 0.2% to $1.1925.

The recent selloff in European bonds has been triggered by a surge in US yields as a result of expectations that the overheating economic recovery will reignite inflation and could lead to a premature rate hike.

On Monday, ECB President Christine Lagarde said in a blog post that the near-term outlook remains uncertain, and reiterated her promise to keep financing conditions favorable.

She said the central bank would measure its progress using “a joint test that appraises the prevailing financing conditions against the euro area’s economic and inflation outlook”. It has €900bn of capacity left under PEPP, its main crisis-fighting tool, which is due to run until at least March 2022.

“We retain the option to adjust the pace of purchases at any point in time in response to potential changes in market conditions,” she said. “While much progress has been made and we can see light at the end of the tunnel, we cannot be complacent.”

But Klaas Knot, head of the Dutch central bank and ECB governing council member, indicated PEPP could be wound up earlier than expected if the pandemic was contained quickly and the economy rebounded strongly. “As long as we are in a situation with contact restrictions, it’s clear that the pandemic emergency purchase program won’t stop,” Knot, who heads the Dutch central bank, said in a press conference. “But if we make good progress with vaccinations, that moment will come somewhere later this year.”

Quoted by the FT, Peter Schaffrik, RBC Capital Markets global macro strategist, said: “Whilst it seems clear that the ECB is able to make European fixed-income markets outperform versus, say, the US and the UK, it is less clear whether they can stand in the way of higher bond yields in general.” Still, Schaffrik said the ECB could already “feel vindicated” after real yields, adjusted for inflation, remained “well anchored” on eurozone sovereign bonds and returned close to record lows after the central bank’s last meeting two weeks ago.

Analysts noted that the ECB has taken a different tack to its peers, as the US Federal Reserve and the Bank of England have not joined it in pushing back against rising yields.  “The ECB, as the one central bank to have pledged to actively counter the rise in bond yields, is left in a pickle,” ING analysts said.