ECB Preview: Will Verbal Intervention Finally Lead To Something More

After touting the flexibility of its asset purchase program for preserving favorable financing conditions, the European Central Bank has been surprisingly inactive in the face of the recent bond market rout, with its net bond purchases declining in the past two weeks. According to Bloomberg economist Maeva Cousin, ECB President Christine Lagarde is set to reiterate this flexibility today, but she now seems unlikely to signal its imminent use. That will leave the Governing Council facing increased scrutiny of its reaction function.

But it seems more likely that the ECB has judged the move as small enough to ignore and will only signal it stands ready, as before, to “purchase flexibly with a view to preventing a tightening of financing conditions that is inconsistent with countering the downward impact of the pandemic on the projected path of inflation.”

This will raise important questions on the PEPP’s reaction function and on the size and nature of market moves needed to trigger a response. But in any case, markets do not expect a quantitative target or a change to the overall size of the program. There’s plenty of space to ramp up purchases for a short period.

With that in mind, here is a preview of what to expect courtesy of Newsquawk:

The ECB is set to stand pat on current policy settings with a bulk of the focus for the announcement set to fall on how the ECB characterises the recent advances in global bond yields, what the drivers for recent moves have been and what impact this has had on financing conditions in the region. Despite verbal intervention from policymakers, the ECB is yet to materially ramp up bond purchases on a net basis and as such Lagarde will be pressed on what tools the ECB has at its disposal to counter any unwarranted moves in rates markets and whether a consensus has formed on this issue. The qualitative assessment of the Eurozone’s outlook will be accompanied with the quantitative economic projections, which are expected to show that inflation will remain below the ECB’s current target by the end of the forecast horizon.

PRIOR MEETING: As expected, the ECB kept monetary policy settings unchanged whilst reconfirming its “very accommodative monetary policy stance”. The ECB made a new addition to its statement, noting that “if favourable financing conditions can be maintained with asset purchase flows that do not exhaust the envelope over the net purchase horizon of the PEPP, the envelope need not be used in full”. At the follow-up press conference, President Lagarde noted that incoming data confirmed the central bank’s baseline scenario outlined in December. Despite the tightening of lockdown restrictions since the previous meeting, Lagarde said that policymakers took some comfort in the Brexit deal which was announced late December, the vaccine rollout, and the upcoming disbursements from the recovery fund. That said, the ECB continued to see growth risks still tilted to the downside, though less pronounced.  Elsewhere, the press conference was a relatively tame affair with policymakers of the view that for now, they have provided all the stimulus that they can, and wish to see how the vaccine rollouts progress before taking a more quantitative assessment in March.

RECENT DATA: On the inflation front, flash Y/Y CPI for February remained at 0.9%, whilst the ex-food and energy metric slipped to 1.2% from 1.4%. Policymakers continue to stress that any upcoming increases are likely to be due to transitory factors. Backward-looking Q4 Q/Q GDP was confirmed at -0.6% vs. Q3’s 12.5% expansion, whilst timelier PMI readings continue to highlight the diverging fortunes of the services and manufacturing sectors with the former rising modestly to 45.7 from 45.4 in February and the latter rising from 54.8 to 57.9; the overall composite print remains in contractionary territory.

RECENT COMMUNICATIONS: In the wake of the recent advances in global bond yields, President Lagarde stated that the ECB is closely monitoring the evolution of longer-term nominal bond yields, adding that the PEPP envelope gives the Bank considerable flexibility and firepower in conducting purchases. Chief Economist Lane warned that an excessive tightening in yields would be seen as inconsistent with fighting the pandemic shock to the inflation path, adding that the Bank will conduct PEPP purchases in a flexible manner according to market conditions and with a view to preventing a tightening of financing conditions. Germany’s Schnabel highlighted that a rise in real long-term rates at the early stages of the recovery, even if reflecting improved growth prospects, may withdraw vital policy support too early and too abruptly, suggesting that at that point, policymakers would need to step up their level of support. Italy’s Panetta appeared to make the case for an eventual shift to YCC, according to UBS, by highlighting the need to preserve accommodative financing conditions by “anchoring key financial variables – above all lending rates and the yield curve”. Greece’s Stournaras has been the most explicit in pushing back on the recent rise in yields after stating that there was no fundamental justification for a tightening of nominal bond yields at the long-end. German hawk Weidmann remarked that the size of the increase in yields is not particularly worrisome, however, increases in bond yields must be carefully analysed, adding that the ECB can adjust the pace of PEPP purchases and the Bank is yet to hit the reversal rate. Netherlands’ Knot has taken a relatively upbeat view of the situation by noting that the starting point in the discussion at the ECB is that the increase in rates better reflects growth and inflation prospects. Source reports have suggested that policymakers believe there is no need for drastic action in order to curb advances in yields, adding that verbal intervention and the flexibility of PEPP are the tools to manage the recent rise in yields.

RATES: From a rates perspective, consensus looks for the Bank to stand pat on the deposit, main refi and marginal lending rates of -0.5%, 0.0% and 0.25% respectively. Recent comments from Germany’s Weidmann have suggested that the Bank is yet to reach the reversal rate, whilst other Governing Council members have continued to stress that a rate cut is an option available. That said, desks are of the viewpoint that such a move is unlikely at this stage. Additionally, when faced with the option of lowering the deposit rate in March as the crisis was unfolding, policymakers refrained from doing so. As a guide: markets currently assign a ~4.5% chance of a 10bps cut to the deposit rate at the upcoming meeting and around an 18% probability by the end of 2021.

BALANCE SHEET: Expectations are for the PEPP envelope to be held at EUR 1.85trl and run until the end of March 2022, whilst the APP is to be maintained at a clip of EUR 20bln per month on an open-ended basis. A lot of the focus in the run up to the announcement has been on policymakers’ willingness to counter any unwarranted rise in yields by increasing the pace of weekly purchases. As it stands, Monday’s announcement saw net purchases under PEPP of EUR 11.9bln vs. EUR 12bln in the prior week (4-week average prior to these figures was EUR 14.9bln, according to ABN AMRO). The ECB has attributed the drop-off to large redemptions (as shown via the gross figures), however, the pace of purchases has been viewed as being at odds with some of the verbal interventions by policymakers. Analysts at ING suggest that a prolonged effort of increasing the pace of purchases to EUR 110bln per month until the end of September could bridge the gap between now and the Eurozone being closer towards its goal of achieving herd immunity. ING notes that the ECB could afford to conduct purchases at this pace for three months “without impacting expectations that net buying would continue at the baseline pace until the envisaged end date (end March 2022)”. However, doing it across a longer timeframe than three months could bring into question the end-date of the programme or whether the envelope needs to be expanded. From a longer-term perspective, UBS expects the regular APP programme to take over from the PEPP when it expires with an increased monthly envelope.

PRESS CONFERENCE: The most likely focus of the press conference will be on the communication efforts by President Lagarde to reassure markets that the ECB has within its disposal, the means to stem any unwarranted rise in yields which could tighten financial conditions in the Eurozone. As above, the ECB is unlikely to make any adjustments to existing tools at this stage, beyond increasing the flexibility of PEPP purchases and continued jaw-boning. That said, also as noted above, the ECB is yet to impose any material pick-up in asset purchases on a net basis and therefore, Lagarde might be pressed for greater clarity on why bond purchases appear to have not been ramped up in recent weeks. Some desks have suggested that this might be due to a lack of consensus on the executive board (who are in charge of the pace of weekly purchases), however, for the upcoming press conference, Lagarde will need to present a clearer view on how recent moves have been interpreted by policymakers and what reaction function the Bank has  to such moves, if they are deemed to be unwarranted. In doing this, Lagarde could opt to provide greater detail on what the Governing Council believes is driving the recent rise in global yields and whether this is attributed to spillover action from the US or a reflection of the region’s growth outlook; something which might become more evident as part of the accompanying economic assessment. Part of the communication challenge for Lagarde will also be conveying how exactly the ECB assesses financing conditions, something which analysts at Nordea do not believe will be forthcoming and therefore leave the market guessing on this front. That said, some guidance could be offered by downplaying the recent rise in nominal yields and instead focusing more on movements in real yields. Policymakers are ultimately likely hoping that they can buy time until the Eurozone recovery becomes more evident, which in turn will provide greater clarity on the drivers of yields in the region. If the recovery fails to materialise by the time of the June meeting, Morgan
Stanley suggests that the ECB might have to revisit the possibility of an enhancement to TLTROs, stronger forward guidance or a cut to the deposit rate.

ECONOMIC PROJECTIONS: UBS expect the Staff to present a marginal uptick to the 2021 GDP forecast of 3.9% to 4.0% with any positive spillover from the stronger than expected Q4 2020 to be offset by a weak Q1 2021. 2022 and 2023 are expected to be held at current levels of 4.2% and 4.3% respectively with the ECB set to maintain its view that the health crisis will be resolved by early 2022. On the inflation front, UBS expects the January 0.9% Y/Y increase (ECB forecast Q1 at 0.3% Y/Y) allied with higher oil price assumptions to prompt an upgrade of the 2021 inflation projection to 1.7% from 1.0%. 2022 is expected to cool to just 1.2% (Dec forecast 1.1%) before rising to 1.5% (Dec forecast 1.4%) in 2023, but ultimately remain below the ECB’s current inflation goal. This could prompt some questioning about the ongoing strategic review at the Bank. However, Lagarde will most likely refrain from front-running the findings of the review, the results of which are set to be discussed in September. 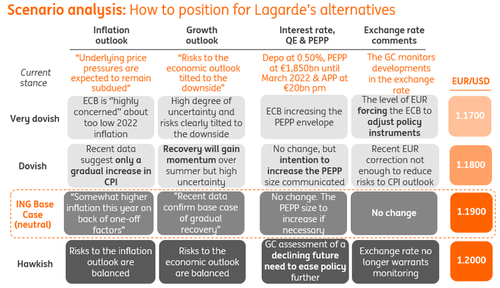 In case one cheat sheet is not enough, here is a second one from Vanda Research

🚨 ECB day! Consensus is that the ECB either doesn’t have the tools or doesn’t have the ability (poor comms) to contain bond yields. This thinking may be a bit complacent. If the ECB has learnt its lesson since 08/09 then it’s almost ‘now or never’ to decouple from the Fed $EUR https://t.co/qm0NN8GWpY