As Tesla slides on Wednesday…

… perhaps as Elon Musk spends his days tweeting about Dogecoin, buying bitcoin as a distraction to Tesla’s newfound troubles in China as Michael Burry noted, or perhaps as a small subatomic dose of reality trickles into the Tesla cultist-sphere – Edmunds, one of the most reputable online resources for automotive information, dropped a bombshell about Tesla vehicles.

Edmunds, which is tasked with reviewing, analyzing and writing about automobiles and has been doing so since 1966, tweeted that “every single Tesla” they have tested “has failed to hit its EPA range estimate”:

The fact is every single Tesla we’ve tested has failed to hit its EPA range estimate: https://t.co/6ze4lqVBIy

In other words, Tesla vehicles don’t live up to the range that the company claims – at all.

Edmunds linked to a comprehensive testing of electric car range and consumption that the company published on Tuesday. A chart included in the article showed that “every Tesla we’ve tested has failed to hit its EPA range estimate” and that there were four vehicles in Edmunds’ 300 mile club – none of which were Teslas. 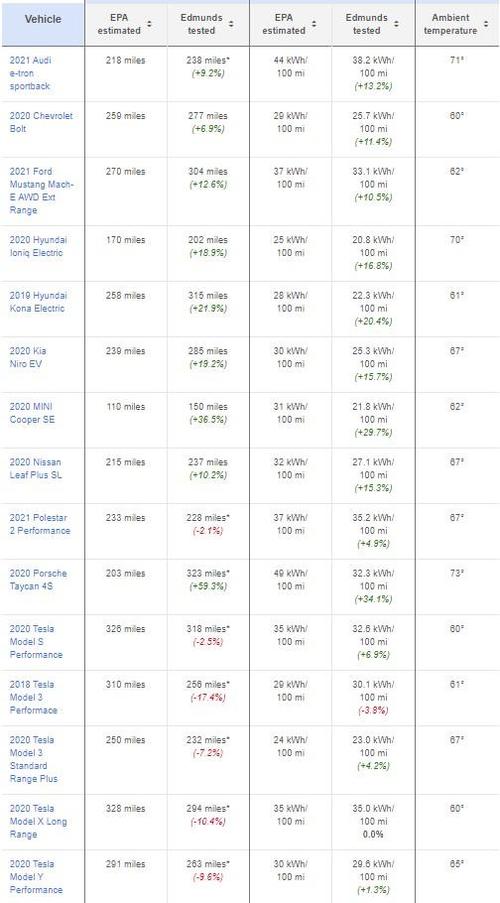 All five Tesla models tested wound up at the bottom of the chart when comparing EPA estimated ranges to Edmunds tested ranges. The Audi e-Tron topped the list and, in the same Tweet thread, Edmunds notes that “the Porsche Taycan outperforms its EPA range estimate by the widest margin –– an almost 60% increase”.

As for their methodology, Edmunds detailed how it defined their observed ranges and delta from EPA claimed ranges:

Edmunds begins with full battery charge and drives an electric vehicle on a mix of city and highway roads (approximately 60% city, 40% highway) until the battery is almost entirely empty. (We target 10 miles of remaining range for safety.) The miles traveled and the indicated remaining range are added together for the Edmunds total observed range figure. We prefer to use a higher percentage of city road driving because we believe it’s more representative of typical EV use.

In EPA tests, a vehicle is run in the default settings at startup. If there are more efficient drive modes available, or if you can increase the level of regenerative braking, but the vehicle doesn’t default to these settings, they won’t be utilized. Edmunds’ standard practice is to use the most efficient drive mode as long as it doesn’t affect safety or practical comfort levels, such as deactivating the climate control system or significantly reducing power for accelerating or maintaining appropriate highway speeds.

We run with windows up and the climate control set to auto at 72 degrees, and we maximize regenerative braking during stops. We follow the posted speed limits and keep within 5 mph of them, traffic and conditions permitting.

You can view all of Edmunds’ definitions for its categories, its protocol for its testing, and the entire list here.

In a note to clients on Wednesday, analyst Gordon Johnson said “it’s almost as if [Tesla] is an abject deception machine, which is now coming to the forefront”.

He continued, comparing the company to Theranos: “We’ve been highlighting this for years, and there’s websites dedicated to this. Remember, [Elizabeth] Holmes at Theranos was supposed to be a ‘great innovator’. She lied about the capabilities of her blood machines.”

Johnson then concludes his note by likely yelling into the ether: “Will anyone report on this?”

GameStop’s Stock May Have Exploded, But Traffic To Its Stores Is Still Tumbling