The Egyptian authorities have seized the massive container ship that notoriously blocked the Suez Canal for almost a week as the government demands hundreds of millions of dollars in compensation from its owners.

This week, an Egyptian court ordered Ever Given’s Japanese owner, Shoei Kisen Kaisha, to pay a whopping $900 million in compensation after the vessel blocked the world’s most important waterway for six days. 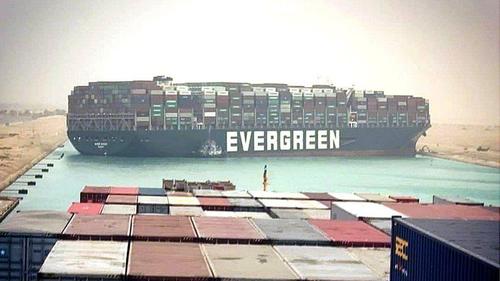 The seizure was first reported on Ahram Gate, a state-run website, on Tuesday:

Lieutenant General Osama Rabie, Chairman of the Suez Canal Authority (SCA), confirmed in a press statement, today, Tuesday, that the Panamanian ship “Evergiven”, which ran aground earlier for six days, was seized for failure to pay an amount of $ 900 million , which is the value of what it caused. The delinquent ship from losses to the Authority as well as the flotation and maintenance process, according to a court ruling issued by the Ismailia Economic Court.

The Authority relies in its estimation of the fees mentioned in the guidance regulation in force within the Suez Canal Authority, and the Authority based its request for precautionary seizure on the ship, on Article 6 of the Economic Courts Law, which is exclusively the jurisdiction of the appellate circuits in the economic courts, to first consider all disputes and lawsuits that It arises from the application of maritime trade law.

The Authority also based its request on Article 59 of the Maritime Trade Law, which permits precautionary seizure of ships by order of the head of the court or whoever acts on his behalf. The order also permits the imposition of this seizure even if the ship is ready to travel, and it is also based on Article 60, which states that The precautionary seizure is signed except for the fulfillment of a maritime debt, and the debt is considered maritime if it arises from several reasons, including port fees and waterways, the expenses of removing, salvaging or lifting the ship’s wreck and cargo, and the damages caused by the ship due to collision, pollution or other similar maritime accidents.

The compensation payment Egypt seeks includes lost revenue from the ships that would have transited the waterway during the blockage and damages to the canal and the equipment and labor to dislodge the mega container ship from the canal’s bank.

For at least two weeks, Ever Given has been moored in Egypt’s Great Bitter Lake, at the canal’s midpoint as it undergoes inspections and now seizure. 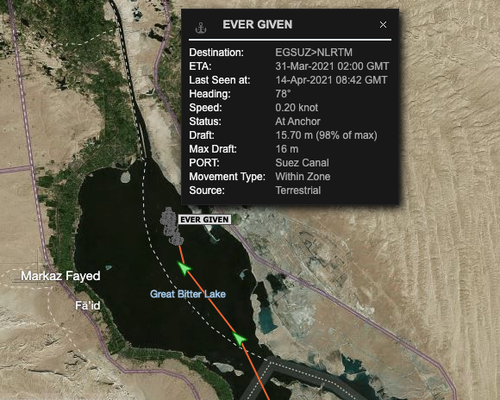 Osama Rabie, chairman of the SCA, told the Wall Street Journal that the vessel “will remain here until investigations are complete and compensation is paid.” He added, “the minute they agree to compensation, the vessel will be allowed to move.”

WSJ said Ever Given’s Japanese owner, Shoei Kisen Kaisha, is locked in SCA discussions on compensation amounts. The vessel’s owners filed a lawsuit in a British court with the hopes of limiting its liability for the incident.

Rabie told Egyptian television on Monday that a complete investigation into the mishap on the canal will be wrapped up by the end of the week. He said even after the investigation is complete – compensation negotiations could continue. He said the ship’s owners were attempting to reduce compensation by at least 90%.

All and all, Ever Given’s six-day accident in the world’s most important waterway could turn out to be the most expensive parking ticket ever.

EXCLUSIVE AUDIO: Think Tank’s Star Lawsuit Witness Admits to Tommy Robinson That They Bribed Him For Testimony Against US Congressional Staffer

Buchanan: For What Should We Fight Russia Or China?