New York City Police are searching for this man who attacked a 65-year-old Asian woman in broad daylight in Midtown on the sidewalk on West 43rd Street near Ninth Avenue. 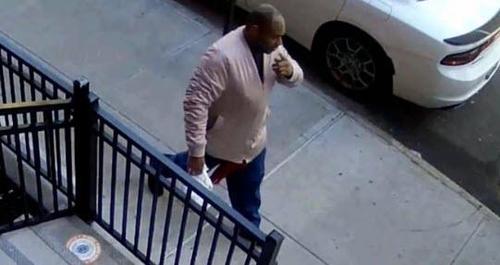 In a press release, police say they are “asking for the public’s assistance in identifying the following individual wanted in connection to a hate crime assault incident.“

“It’s really disgusting when you see the video,” he said.

“We’re calling on all New Yorkers, anyone with information, we put out a pretty good picture of the, the individual that we want to talk to that was seen walking away, and you just try to make sense of it…and you can’t,” he said.

The New York Post reported that the suspect yelled anti-Asian statements while he beat the woman, including, “F**k you, you don’t belong here.”

The video below shows a man inside a building just a few feet away watching the attack. Like others, he does nothing.

One person who did act was a security guard who walks over and closes the door. Another man stops undoing packages to watch the entire attack without intervening.

The Post reports that the guard insisted that he was unaware of the attack. However, he could at a minimum clearly see the woman in distress on the ground.

The New York police department has recorded a 1,300 percent increase in hate crimes against Asian Americans during the pandemic and as we previously noted, they held a press conference last week to highlight the assailants…

At the NYPD press conference on anti-Asian hate crimes today, they show booking photos of suspects apprehended & those they’re continuing to search for. The hate crime suspects appear to all be people of color. #StopAsianHate pic.twitter.com/rZSwlkagAA

[ZH: Spot the ‘white supremacist’ in the booking photos of the Asian hate-crime perpetrators…] 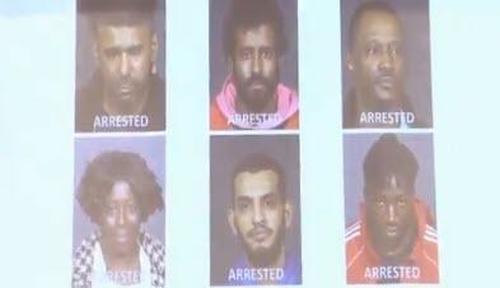 [ZH: As we previously highlighted, if you rely on The New York Times, the Democratic Party or CNN – they are interchangeable – for your perception of reality, you now believe America is reeling from the latest expression of white supremacy: Anti-Asian racism. The New York Times, the leader in mass hysterias fomented by the left – hysteria is the oxygen of the left – printed this headline last week: “Attacks on Asian-Americans in New York Stoke Fear, Anxiety and Anger.” And the subhead reads: “Hate crimes involving Asian-American victims soared in New York City last year.”

If one reads past the headline – which most people do not – the article gives the actual numbers: “The number of hate crimes with Asian-American victims reported to the New York Police Department jumped to 28 in 2020, from just three the previous year.”

A report by the Center for the Study of Hate and Extremism drew national media attention for identifying a 149% increase in anti-Asian hate crimes in 2020 compared to 2019 in 16 of our largest cities. A startling number — until you learn the actual number of hate crimes in those cities rose from 49 to 122 – in a country of 330 million people.

So, to cut through the gaslighting, here are the facts according to the most recent FBI crime data (2019):

But, in what could be called “compound lying,” the Times did blame “former President Donald J. Trump, who frequently used racist language to refer to the coronavirus.”

Of course, the Times did not provide an example of Trump’s racist language with regard to the coronavirus. One must assume that blaming the Chinese government for the virus or referring to the virus as the “China virus” or “Wuhan virus” is regarded as racist, even though virtually every prior epidemic was named after its city or region of origin: the “Spanish Flu,” “Hong Kong Flu,” “Ebola Virus,” etc.

Meanwhile, the blanketing of the country with the Atlanta lie and the anti-Asian violence continues. The cover of this week’s Time features a drawing of a young Asian woman under the headline: “We Are Not Silent: Confronting America’s Legacy of Anti-Asian Violence.”

We can’t be silent in the face of rising violence against Asian Americans. That’s why today I’m taking additional steps to respond–including establishing an initiative at the Department of Justice to address anti-Asian crimes.

These attacks are wrong, un-American, and must stop.