Nothing exemplifies the Central Bank-run system that buoys the rich, decimates the middle class and rewards corporations without regard for their ability to consistently turn a profit more than Elon Musk and Tesla.

And now, because of the poorly regulated non-free-market system that Musk has had the luxury of starting his car company in, he is on the precipice of passing Jeff Bezos as the world’s richest man.

Tesla’s continued stock price rally – a tonic made up of what we believe to be analyst capitulation and mysterious call buying – has propelled Musk to the top of the list of richest people in the world. As of Wednesday of this week, his net worth stood at $184.5 billion, which was slightly short of Jeff Bezos. 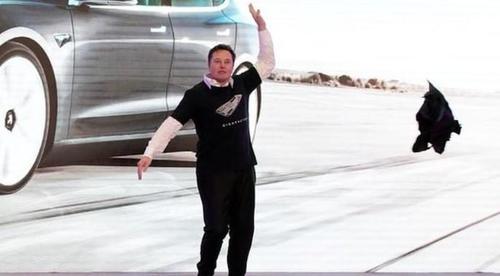 In the past year alone, Musk’s net worth has risen $146 billion, which Bloomberg called “possibly the fastest bout of wealth creation in history”. Meanwhile, revenue and net income at Tesla hardly show a similar story of what Musk would undoubtedly call “exponential growth”.

Musk is currently sitting on $41.1 billion in unrealized paper gains on vested stock options from grants he received in 2012 and 2018. He also owns about 20% of Tesla, which is now being valued at a market cap of $715 billion. Assuming all things stay equal for Amazon stock, Musk could surpass Bezos’ net worth if Tesla winds up in the $790 to $800 per share range, according to Celebrity Net Worth estimates. 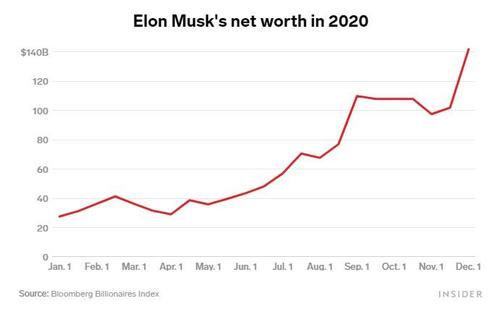 As we noted in December, isn’t the only billionaire who saw their wealth balloon while the rest of the world suffered an economic recession this year. While job loss persists for Americans making less than $20 an hour, the rich have gotten richer. More specifically, the most wealthy American billionaires have seen their net worth bounce back dramatically, thanks to strong stock market performance.

Here’s a look at who’s gotten richer since the market bottom in March 2020, and just how much their net worth has increased since then: 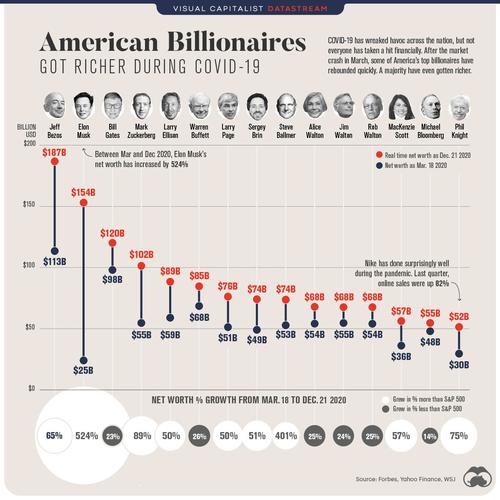 Between March’s market bottom and December 2020, the billionaires included on this list grew their wealth by 57% on average. Interestingly, that’s about 10 percentage points higher than the overall growth of the S&P 500 index during the same time period.

Musk saw the highest increase during this period, with a $129 billion boost in net worth—that’s a whopping 523% in gains.

Jeff Bezos saw the second highest growth in net worth with a $74 billion increase. This isn’t surprising, given that Amazon’s stock price has climbed 69% since the beginning of 2020.

It’s not just the billionaires on this list that have increased their wealth. In fact, during the pandemic, billionaire wealth on average has increased 27% worldwide. Growth has been exceptionally strong in tech and healthcare.

Pro-Trump Marine Goes Off on DC Police After They Mace Stop the Steal Protesters, ‘We Had Your F***ing Back, But We Ain’t Got Your Back No More!’