Back in January we wrote about a mixup with SIGL, which wrongfully rocketed higher after numerous Tweets from the likes of Elon Musk and Jack Dorsey recommending the Signal messaging app. As we noted then, the “mix up” was likely a result of people simply not caring, and chasing momentum, and tons of new, hot, stupid money in the market.

Dear @federalreserve: SIGL, a company with 1 employee, and no operations, has a market cap of $421.6MM after its sock soared by 1000% today.

Now, history is repeating itself. Elon Musk has taken to Twitter numerous times over the last week to talk about using the Clubhouse app to communicate. In fact, most recently, he proposed speaking to Vladimir Putin on the app, an offer Putin was reportedly receptive too.

Musk has been talking about the app so much, many have speculated as to whether or not he is an investor in it.

ClubHouse Media Group Inc., which trades under CMGR, is a “self-described marketing and media firm targeting social media influencers,” according to Bloomberg. It is unrelated to the Clubhouse app that Musk has been pumping. Regardless, it has spiked over 1000% this year as retail traders have ignorantly (or, in some cases willingly?) mixed the two entities up. 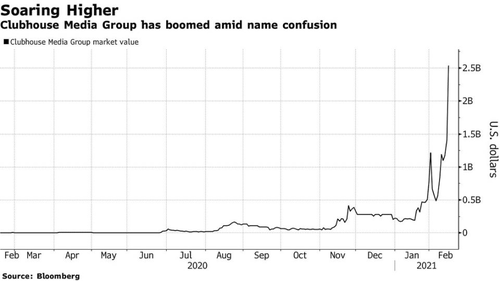 ClubHouse was formerly named Tongji Healthcare Group Inc. and now trade under CMGR. The company’s market cap has ballooned to $2.5 billion from $225 million in early January.

Hilariously, this puts the fake ClubHouse at almost 2x the valuation of the actual Clubhouse.

We can’t help but wonder if the company will say something to clear up the confusion. Recall, last month, Signal took to Twitter to explain that it has nothing to do with SIGL.

“It’s understandable that people want to invest in Signal’s record growth, but this isn’t us,” Signal tweeted. “We’re an independent 501c3 and our only investment is in your privacy.”

Is this what stock analysts mean when they say that the market is giving mixed Signals?

It’s understandable that people want to invest in Signal’s record growth, but this isn’t us. We’re an independent 501c3 and our only investment is in your privacy. pic.twitter.com/9EgMUZiEZf

In speculative periods, this kind of investor behavior was seen a few years back when market participants panic bought Zoom Technologies, thinking it was Zoom Video Communications.

Will Clubhouse now put out a similar statement?

Is The Move In MOVE About To Rock The VIX