Escobar: Bombshell Book In Germany Revives 9/11 As A Business Model

Authored by Pepe Escobar via The Saker blog,

Nearly 20 years after 9/11, Germany and the German-speaking world are being hit by a formidable one-two.

(“Thinking Like the Enemy – 20 Years State of Emergency, 9/11 and the Geopolitics of Terror”) is being published in Germany in two books.

The first one – Das Erdöl, der Dollar und die Drogen (“The Oil, The Dollar and The Drugs”) – is out this week. Volume II will be out next week.

Nomi Prins, formerly from Goldman Sachs, has described Schall’s “investigation of 9/11 insider trading” as “stunning”. Marshall Auerback, researcher at the Levy Institute in the U.S., noted how “most of the MSM still refuse to tackle the broader, more controversial aspects of the 9/11 tragedy”. Schall, he adds, “provides a healthy corrective”.

A sample of Schall’s work, already published by The Saker blog, is this interview on 9/11 terror trading.

I’ve had the pleasure to write the introduction for the German one-two. Here it is – hoping that such an extraordinary achievement may find its way in many other languages, especially across the Global South. 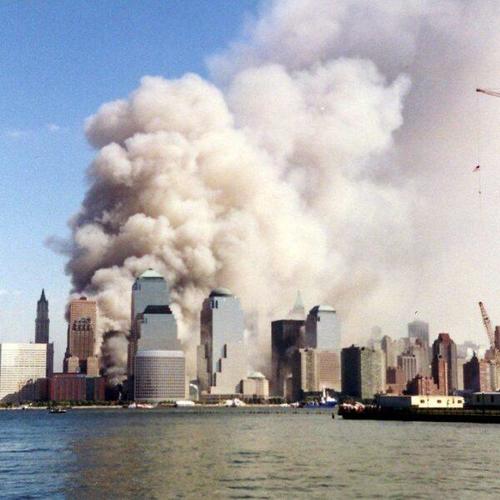 Until COVID-19 showed up on the scene in the Spring of 2020, nearly two decades after the fact, the world remained hostage to 9/11. This was the ultimate geopolitical game-changer that set the tone for the young 21st century. The book you have in your hands asks the ultimate question: why 9/11 matters.

Follow the money. It’s quite fitting that this meticulous investigation is conducted by a gifted, extremely serious financial journalist – and, in an unprecedented way, presents a mass of information previously unavailable in German.

I’ve known Lars Schall, virtually, for years – exchanging correspondence on politics and economics. When we met in person in Berlin in 2015, we finally had time, live, to also indulge in our number one pop culture mutual passion: David Lynch’s Twin Peaks. Lars may be a German incarnation of FBI Special Agent Dale Cooper. Or, better yet, the compassionate version of Albert Rosenfield, the sarcastic pathologist in Twin Peaks.

Take for instance this dialogue from Twin Peaks:

Albert Rosenfield: We sent a portrait of your long-haired man to every agency from NASA to DEA and came up empty. This cat is in nobody’s database.

Special Agent Dale Cooper: A man that four of us have seen here in Twin Peaks.

Albert Rosenfield: [smiling] Sure. Oh, by the way, you were shot with a Walther PPK. It’s James Bond’s gun, did you know that?

So what you have in your hands is 9/11 dissected by a thoroughly working pathologist, who had “a lot of cutting and pasting to do”. He was aware of myriad red lines from the start, as well as myriad vanishing acts and false non sequiturs. 9/11 may be the ultimate illustration of one of Twin Peaks’ legendary one-liners: “The owls are not what they seem”.

This journey will take you through hundreds of pages of text and myriads of endnotes, over 2,400 of them, quite a few dealing with many different sources, as well as selected sensitive documents treated by professional translators.

The nearly mythical computer software program PROMIS, created in the 1970s by former NSA analyst Bill Hamilton, plays a sort of Rosebud role in this narrative – complete with a trail of unexplained deaths and disappearing files that renders some of its avatars, especially those containing backdoor eavesdropping capabilities enhanced by artificial intelligence (AI) almost impervious to investigation.

As a matter of fact, Lars had been contacted by Bill Hamilton, who asked him if he could help in relation to the PROMIS affair. It was this request – which took place in the Spring of 2012 after Lars had just published a 9/11-Insider Trading article at Asia Times – that has been the spark which started the investigation you are about to read.

For the German reader, one of the firsts of this sprawling analysis is to take what is considered in the U.S. as a “conspiracy theory” – Mike Ruppert’s seminal 2004 book “Crossing the Rubicon” – and, in Lars’s words, “figure out how far it can be proven correct, more than 15 years after it was published.”

Lars shows in detail how 9/11 enabled a state of emergency, a permanent Continuity of Government (COG) in the U.S. and mass surveillance of U.S. citizens – connecting the dots all the way from missing trillions of dollars in the Pentagon to NSA data mining and leading U.S. neocons. The latter had been praying for a “Pearl Harbor” to reorient US foreign policy since 1997. Their prayers were answered beyond their wildest dreams.

The investigation eventually displays a startling road map: the war on terror as a business model. However, as Lars also shows, in the end, much to the despair of U.S. neocons, all the combined sound and fury of 9/11 and the Global War on Terror, in nearly two decades, ended up bringing about a Russia-China strategic partnership in Eurasia.

It’s fair to ask the author what did he learn as he juggled for years with this immense mass of information. Lars points to the familiarity he acquired with the work of Peter Dale Scott – author, among others of “The Road to 9/11”, and a specialist in the origins of the U.S. Deep State – which is diametrically opposed to the sanitized narrative privileged by the Beltway and U.S. corporate media. Lars presents information by Peter Dale Scott that had never been translated into German before.

Special Agent Lars Cooper / Lars Rosenfield had in effect to kiss goodbye to a career as a journalist, because “I’ll be forever scorned as a ‘conspiracy theorist’,” as he told me. So a stark choice was in play; fearlessness, or a comfortable career as a corporate hack. In the end, Lars chose fearlessness.

In Twin Peaks, Special Agent Dale Cooper has ultimately to confront himself. He knows he’s lost if he tries to run away from his dark self – who is “the dweller on the threshold.” Our Special Agent Lars Cooper definitely did not run away from the dweller on the threshold this time around. He dared to cross to the other side to stare at the abyss. And now he’s back to tell us in a book what it looks like.

(“Thinking Like the Enemy – 20 Years State of Emergency, 9/11 and the Geopolitics of Terror”), by Lars Schall 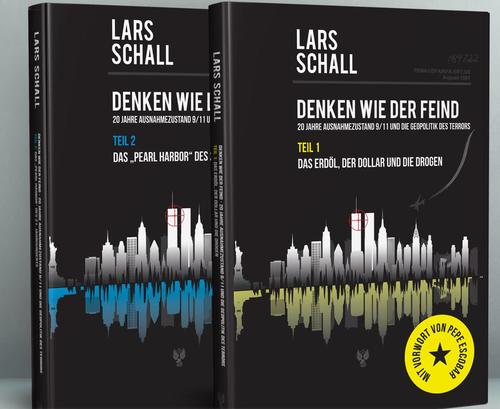 (The Oil, The Dollar and The Drugs)

Via Books on Demand (BOD):

Via Books on Demand (BOD):