Authored by Alexander Sammon via The American Prospect,

Committee assignments are one of the least eye-catching parts of politics, but they’re also one of the most important ways in which actual political power is wielded. Certain committees in the House, like Energy and Commerce, Ways and Means, and Appropriations, have outsized influence and money power. (They are often called the “money” committees, not just because they’re where the action is but because members can earn lots of money in campaign contributions from industries with business before them.) 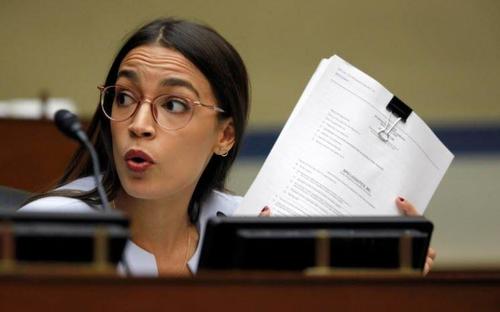 Deliberations over the next several days will be extremely important for progressives in the House, as they angle to lock down seats on these powerful committees for their members. To that end, Rep. Alexandria Ocasio-Cortez (D-NY) was expected to secure a prized position on the Energy and Commerce Committee, a seat vacated by outgoing New Yorker Eliot Engel. Among other issues, the committee has jurisdiction over health care and climate change issues, a natural for a Congresswoman who has championed Medicare for All and the Green New Deal.

Ocasio-Cortez was expected to cruise comfortably to the position. She was the first to raise her hand for the seat, and she won the backing of dean of the New York delegation, Rep. Jerry Nadler. But last week, as Politico reported, Long Islander Kathleen Rice made an out-of-nowhere, last-second bid for the seat, interrupting the process. Rep. Rice is a backbencher from the party’s right flank who, in 2018, refused to support Nancy Pelosi for Speaker. Without the support of Nadler, and with the famous opposition of steering committee leader Pelosi, Rice’s attempt didn’t seem to be serious.

But in a surprise, last-second Steering Committee meeting on exclusive committee assignments Thursday, which was scheduled at 10 p.m. the night before, centrist Democrats put on a show of support for Rice and against AOC, in what looks to have been a process-defying attempt to keep AOC out of the seat. Fellow New York Rep. Hakeem Jeffries came out in support of Rice, contra Nadler, as did Reps. Anna Eshoo (D-CA) and Diana DeGette (D-CO), author of a book called Chemicals Used in Hydraulic Fracturing.

Most vocal in his opposition to Ocasio-Cortez’s candidacy was Texas’s Henry Cuellar, the caucus’s most conservative member. After Ocasio-Cortez was nominated and seconded, Cuellar opposed, commenting: “I’m taking into account who pays their dues and who doesn’t work against other members whether in primaries or in other contexts,” according to a source with knowledge of the meeting. After Rep. Eric Swalwell (D-CA) called for a vote on the two candidates came an unusual outcome: Rice crushed AOC 46-13.

A similar situation existed with the Energy and Commerce Committee seat vacated by incoming New Mexico Senator Ben Ray Lujan. That seat was expected to go to progressive Texan Sylvia Garcia, but was contested by her moderate colleague from Texas, Lizzie Fletcher. Garcia, the other priority for progressives in Energy and Commerce, was left off the slate without even a vote. Fletcher, who has a troubling track record on unions, got endorsed by Pelosi. The Texas AFL-CIO famously opposed Fletcher’s candidacy for Congress, even against a Republican incumbent.

The result is both a resounding and surprising defeat for progressives, who just days ago had no reason to believe both Ocasio-Cortez and Garcia would be left off the committee, or even that this would be settled this week.

Many of the representatives that came out most forcefully against Ocasio-Cortez have close ties to oil and gas, especially Cuellar. But perhaps more important was Cuellar’s personal opposition to AOC, as evidenced by his statement. Ocasio-Cortez backed Cuellar’s primary challenger, 27-year-old progressive Jessica Cisneros, in March’s primary. Cuellar won narrowly, with backing from the Koch political network and some last minute campaigning from Speaker Pelosi herself, despite the fact that Cuellar regularly votes against the Democratic caucus and has routinely fundraised for Republicans. According to multiple people familiar with the proceedings, Ocasio-Cortez’s recent interview with The Intercept, where she said Speaker Pelosi needed to go, though there was no one to replace her, loomed over the proceedings.

Rice’s triumph is especially surprising, given that she is not known to be well-liked within the caucus. She made powerful enemies of Pelosi and Nadler, and was shut out of a much-desired spot on the House Judiciary Committee just two years ago, because of her refusal to back Pelosi’s speakership in 2018. It’s unclear how her selection might influence her vote this time around. AOC, meanwhile, voted for Pelosi’s speakership.

It’s not the first time Ocasio-Cortez has been frozen out of Energy and Commerce. In 2018, she made a play for a vacant seat, only to be turned away on the grounds that it couldn’t go to a freshman. It was given to sophomore Tom Suozzi instead.

Sylvia Garcia, meanwhile, was expected to be a priority for the Congressional Hispanic Caucus, given that it was once held by Lujan, a Latino. But in a meeting last week, it was Cuellar, who again voiced opposition, leading some to believe that the seat would not be filled by a representative from the state at all.

There are plenty of committee assignments left to be announced, and progressives did win a handful of priority appointments on the money committees. New York Rep. Ritchie Torres got a spot on Financial Services, and Adriano Espaillat made it onto Appropriations. But the treatment of AOC and Garcia looks like a shot across the bow that will have progressives on high alert. If other committee assignments go this way, it will become an open question as to whether a newly united progressive bloc will oppose Pelosi’s speakership come January 3.