A hotly awaited upgrade to the Ethereum network that lowers the volatility of transaction fees has been scheduled for Ethereum’s next major hard fork. 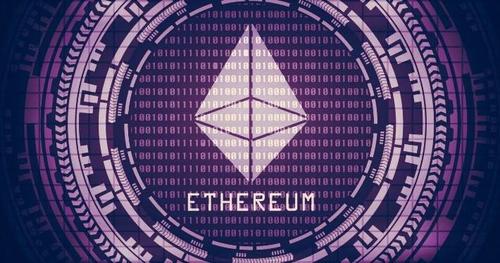 As Decrypt reports, the upgrade, called EIP-1559 (EIP stands for Ethereum Improvement Proposal), is scheduled to go live in Ethereum’s “London” hard fork this July, and crucially for investors, may result in ETH becoming a deflationary asset. 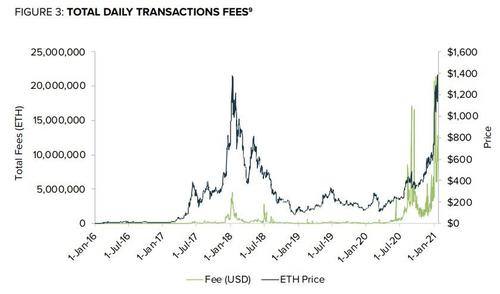 The cost of those fees depends on the supply of miners and users’ demand for them. If there’s a bottleneck on the network, miners can charge usurious rates of over $20 per transaction.

EIP-1559 would replace the supply/demand auction-style system in place today with a standard rate across the network. The fee, called “BASEFEE,” would rise when the market is busy and fall when it’s quiet.

The crucial difference is that the fee is set by the network and altered by burning ETH. EIP-1559 means that miners don’t set the rates; the network does.

And the transaction fees don’t go to miners; they’re burned.

Some analysis has noted that it may not be necessary to pay fees in Ether, but rather fees could be paid in any digital currency of one’s choosing (or even credit cards). This is known as economic abstraction, and has been used to challenge the value of Ether. Similarly, some have argued that Ether suffers from a working capital or infinite velocity problem — as simply a medium of exchange asset, investors may look to minimize their holdings to only what is necessary to pay for a service, i.e., Ether would be treated as working capital.6 Because investors might look to minimize their working capital, the velocity of Ether would increase and its value according to the equation of exchange, M=PQ/V, would decrease.7 In other words, constant selling would drive down the price of the Ether.

However, Ethereum plans to implement a proposal known as EIP-1559. Among other things, this proposal would burn (or destroy) Ether that is used to pay for transactions. This is important because it would transform Ether from a medium of exchange asset to a consumable commodity. Ether would become more like combustible gas than money. If this proposal is implemented, it would also ensure that Ether is the native economic unit on Ethereum – protocol rules would dictate that only Ether could be burned. This would reduce the possibility of economic abstraction – the ability to pay fees in an asset besides Ether.

This burning method may also serve as a deflationary mechanism if the Ether consumed as fuel outpaces the issuance schedule.

If activity increases and the supply of Ether decreases due to burning, a supply and demand curve would indicate an increase in the unit price of Ether because each unit would need to satisfy a greater proportion of economic activity. If EIP-1559 is implemented, it would institute a consumption mechanism that should serve as a positive feedback loop for Ether’s price.

As Decrypt reports, Tim Ogilvie, CEO of Ethereum infrastructure firm Staked, told Decrypt that it’s likely to be “positive on the long term price of Ethereum.” Lower and more predictable gas fees, he said, means that Ethereum isn’t just for the rich, encouraging people to build and use the network.

The upgrade is not without its critics.

Two of the three largest Ethereum miners are angry that it would dig into their fees, and a further 10 have announced their discontent with the upgrade.

“I don’t think miners are going to be long-term winners here. I think they’re gonna fight. But I think there are going to be long term losers,” said Ogilvie. Ethereum 2.0, the long-awaited Ethereum upgrade, transitions the blockchain from a proof-of-work consensus mechanism to a proof-of-stake one. The former rewards miners for processing transactions, the latter rewards people who hold lots of Ethereum.

“I think this is close to existential for a mining business,” said Ogilvie. “And so I think they’re going to take the strongest actions they can. How far are they willing to go? I can’t really predict. But I think I think you’re gonna see them fight extremely hard,” he said.

EIP 1559 “fixes a bug in the economics of Ethereum we’ve known about from the start,” said Tim Beiko, a senior product manager at ConsenSys who’s leading the protocol team implementing EIP 1559, and it’s approval Friday seems to have sparked some relative strength. 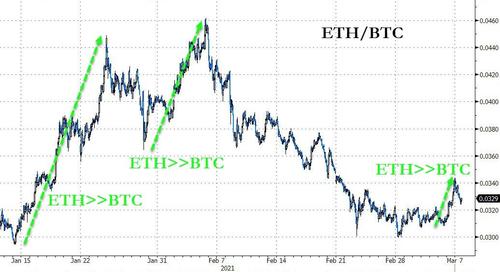 “This is probably one of the biggest milestones we’ve seen recently,” Eric Turner, director of research at Messari, a cryptocurrency analytics firm, told Bloomberg.

Until EIP 1559 goes into effect after being approved Friday, the supply of Ether was theoretically infinite, leading to criticism that its underlying monetary policy was weak and inflationary. 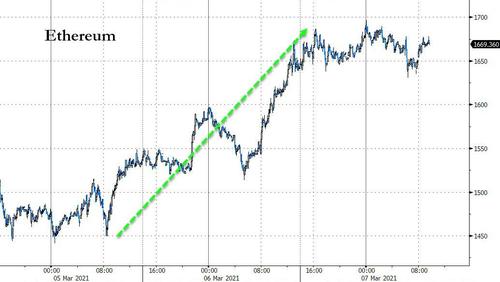 As Grayscale concludes, between the enormous amount of activity on Ethereum, the economic improvements to Ether, and the promise of increased scalability with Ethereum 2.0, there is a lot for the Ethereum community to be excited about.

Printing Money In The Age Of COVID

Rabo: Everything In Markets Has Become Political