Etsy shares spiked Tuesday morning on what is now becoming the only bona fide way to move markets: pumping stocks on social media.

One day after Monday’s massive short squeeze across several names, engineered by the Redditors over at the r/WallStreetBets forum, Elon Musk took to Twitter and Tweeted out “I kinda love Etsy” early on Tuesday morning. It sent shares of the e-commerce company soaring in pre-market trade.

“Bought a hand knit wool Marvin the Martian helm for my dog,” he wrote in a subsequent Tweet.

Etsy shares had barely traded during the pre-market session prior to Musk’s pronouncement. By 8AM EST, shares had rocketed 9% to new 52 week highs and trading volume in the name had already eclipsed the stock’s average daily volume. Nearly 4 million shares had traded by 8:15AM EST. 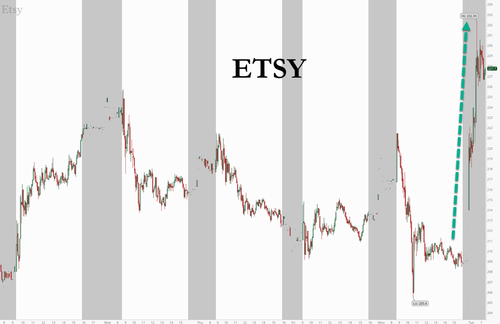 Helping the cause was Jefferies, who raised their 12 month price target on the name, according to CNBC. “We believe behavioral changes incited by the pandemic allow ETSY to tap a broader portion of its $1.7T addressable market, leading to higher frequency and spending,” analyst John Colantuoni wrote.

“Our DCF-derived PT increases to $245(from $205) as accelerating traffic and our deep dive into long-term GMS improves ourconfidence in ETSY’s ability to continue growing faster than overall e-commerce.”

While Elon Musk is no stranger to moving stocks using Twitter – the CEO helped mistakenly move SIGL earlier this month – the massive spike on considerable volume is yet another nod to how rampant speculation has become in the Fed’s grotesque and cruel joke for what used to be a “market”. Fueled by the trillions the Fed has printed this year alone, there is no shortage of dumb, hot money to go around – and no prompt too small for these “investors” to start throwing it anything and everything.

Biden About To Declare US Recognition Of Armenian Genocide, Enraging Turkey

A Hundred Days of Joe