The EU has officially approved the sale of worms as food to be consumed by humans. 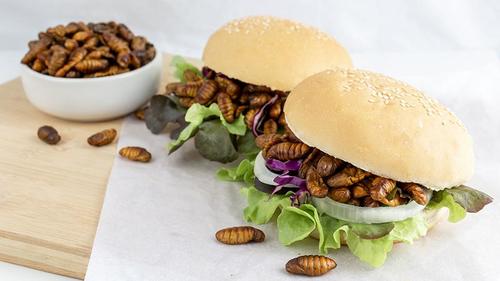 The announcement, made Wednesday by the EU’s food safety agency, specifically states that dried mealworms, the larvae of beetles, are safe for humans to eat, despite the fact that the report also noted that “allergic reactions are likely to occur”.

The report also states that as long as the mealworms have not been able to eat anything for 24 hours before being killed, they should be safe for people to eat.

The report adds that the bugs need to be boiled “to eliminate potential pathogens and reduce or kill the bacteria.”

The ruling will mean that the worms can be ground up and used in foods, such as pasta and biscuits, as sources of protein, so long as national member countries go along with the authorisation.

Ermolaos Ververis, a scientific officer in EFSA’s nutritional unit commented “This first EFSA risk assessment of an insect as novel food can pave the way for the first EU-wide approval.”

In coming months the agency hopes to approve all kinds of other bugs to be sold as meals, including the lesser mealworm, house cricket, banded cricket, black soldier fly, honeybee drone and a type of locust.

The EU has been pushing “insect-based proteins” as a replacement for animal products, claiming it will save the planet.

Last year, the European Commission announced the Farm to Fork (F2F) Strategy, touting it as a “fair, healthy and environmentally-friendly” program that will focus on “increasing the availability and source of alternative proteins such as plant, microbial, marine, and insect-based proteins and meat substitutes.”

The draft noted that the program “will not happen without a shift in people’s diets”.

“Moving to a more plant-based diet with less red and processed meat and with more fruits and vegetables will reduce not only risks of life-threatening diseases, but also the environmental impact of the food system,” claims the strategy.

EU centric news site EURACTIV, noted that the policy is calling for eating bugs, and spoke to Constantin Muraru from the international platform of insects for food and feed (IPIFF), an EU non-profit organisation which represents the interests of the insect production sector.

Muraru lauded the idea of both humans and animals eating more bugs, saying that there is “enormous potential.”

“Currently, the EU is heavily reliant on the importation of feedstuffs, but the disruption in the past few months with the coronavirus outbreak has made it increasingly apparent that we must look to make our agriculture more self-sustainable,” he said.

The EU continues to push the idea of eating bugs, with its Food Safety Authority having approved the sale of a range of bugs as “novel food” earlier this year, meaning that they are increasingly likely to be mass produced for human consumption.

“These have a good chance of being given the green light,” the secretary-general of the International Platform of Insects for Food and Feed, Christophe Derrien, told The Guardian.

Would you switch to an insect-based diet? Although insects are viewed as a highly promising solution to the challenges facing the food industry, many Europeans still see them as novelty food at best.@EURACTIVBerlin reports.https://t.co/15bRNTc0oO

The craze for eating insects stems from UN guidelines that “promote insects as a sustainable high-protein food.”

As we have previously highlighted, eating bugs has been heavily promoted by cultural institutions and the media in recent years because people are being readied to accept drastically lower standards of living under disastrous global ‘Green New Deal’ programs.

This will be exacerbated by the expected economic recession, or even depression, caused by the coronavirus outbreak.

This is why globalist publications like the Economist have been promoting the idea of eating bugs despite the fact that the kind of elitists who read it would never consider for a second munching on crickets or mealworms.

Unsurprisingly, restaurants are not seeing a big uptake for worm burgers, otherwise known as ‘bug macs’, or cricket based cuisine.

How about a weed side salad? And why not wash down your worm food with a tall refreshing glass of sewage?

Last month, the World Economic Forum published two articles on its website which explored how people could be conditioned to get used to the idea of eating weeds, bugs and drinking sewage water in order to reduce CO2 emissions.

A separate article also published on the WEF website investigates how people can be conditioned to enjoy consuming ‘food’ which on the surface sounds disgusting.

The ‘Great Reset’ is about enacting a drastic reduction in living standards for the plebs which will force them to put bugs, weeds and sewage on the menu while the Davos elites continue to feast on the finest cuisine in their ivory towers.

Visualizing The World’s Most Popular Religions

These Are The American Cities Where Rents Rose The Most