Authored by Martin Jay via The Strategic Culture Foundation,

It’s time the EU got its act together on Russia and accepted that Germany runs the EU and it will have its Russian gas pipeline at any cost. But don’t let that stop whining MEPs throwing stones at Putin. 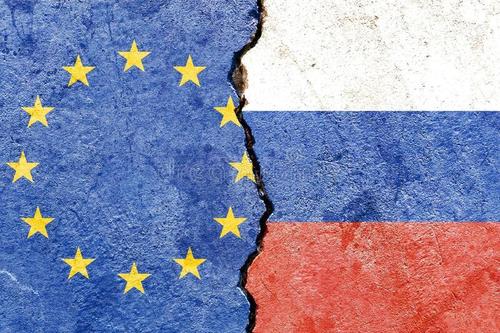 As a body, the EU itself doesn’t fear much. It doesn’t fear the bloc falling apart as already France, Spain and Italy unite in their own ‘brexit’ plans; it doesn’t fear the extreme right gaining a majority in the European parliament in 2024 (a distinct possibility as EU citizens use the populist vote as an anti-immigration signal to the EU); it also doesn’t fear that the chaos of its own making with a vaccine could bring the entire project down as even its most diehard supporters in Brussels talk about the shambles of how the European Commission president has handled the matter.

But there is one thing the EU does fear, in fact: Russia. And they are right to.

Russia is the only entity which can cause real problems for the EU, not only in cyberattacks on companies, banks and media in both the 27-nation bloc but also in key institutions like the European Central Bank in Frankfurt. Putin could, if he chose, cause chaos, in fact within the EU at any moment he chose. And on top of that, the political scandals that he endures only serve him well internationally as it is the EU which practically advertises itself as being a fractured, disorganised and delusional fake superpower which in reality is chasing its own tale most of the time on the world stage and trying its best to cause distractions within its own servile media that it is relevant and has cohesion.

The recent scandal involving Alexei Navalny might shock many in the West who balk on about human rights and lack of freedoms in Russia. But can Brussels really stand on a soap box and, with a straight face, preach to Europeans about such things? Guy Verhofstadt, an odious Belgian euro federalist MEP, recently took a swipe at the management of the EU under Ursula von der Leyen and harped recently that it was “time to get our act together on Russia”. On this particular occasion it was not over the preposterous scenario of the EU foreign policy chief recently visiting Moscow and trying to pull off the awkward back flip, triple axel circus stunt of both chastising Putin over the alleged poisoning of agents while at the same time presenting a begging bowl for the Russian vaccine. The spineless ruse was all about saving the EU from being a laughing stock by its own voters as yet another major policy — vaccines — is exposed as being a calamity in itself. But now it’s not vaccines or alleged assassinations, but energy which is troubling the euro federalists in Brussels who feel vulnerable to attack by Russia, when they know they are facing an unprecedented political crisis which the EU has never seen before. Verhofstadt is championing a call to block a controversial gas pipeline from Russia to Germany which is expected to put Berlin on a collision course with Brussels — a terrifying prospect for top apparatchiks in Brussels who are already fearful of a genuine groundswell of anti-EU resentment in Germany over the EU’s failed vaccine program.

Nord Stream 2 would serve Germany’s energy needs formidably but it also presents other bigger problems for the EU in that Brussels’ energy dependency on Russia increases, giving the latter more power over the former. While the EU tries to stop giggling as it imposes sanctions on Putin’s officials — which prevents them from travelling to the EU — the idea of the EU imposing any leverage on Russia is hysterical and practically a comedy in itself. Energy dependency is nothing new and has forced the EU to look at more radical plans so that some EU countries, like Italy for example, could be less reliant on Russian gas.

Perhaps the most vivid display of rank desperation was to bring in Gadaffi from the cold in 2004, with a Brussels visit which involved tents and female body guards clad in tight-fitting blue commando fatigues. Hilariously, Gadaffi took the podium in the press room and said nothing as journalists did their duty to their EU bosses and applauded him. The comedy is still alive and well in Brussels today now as the EU still cannot find the requisite magic to act as a superior power to Russia and to dish out the moral tutelage to Putin when in reality it grows weaker and weaker each day under the weight of Russia’s energy supplies.

Even on human rights it’s a joke. When the European parliament runs out of debating chambers named after European journalists murdered doing their jobs exposing graft — within the EU — few see the comic irony of MEPs supporting a motion which would pump more EU money into EU-friendly outlets, to actually boost the fake news coming from the Belgian capital.

Or even on a national level how EU countries are becoming more and more like dictatorships every day as human rights are eroded and the role of media is diminished. What did the EU even say about Julian Assange being held in a UK prison (whilst it was in the EU) or about draconian laws being passed in France which erode personal freedoms? Unfortunately, most EU citizens don’t know that scores of millions of euros each year are paid into a slush fund in Brussels which subsidies broadcasters’ production costs when covering EU events — and of course the recipients are very grateful for the bung, which doesn’t in any way — ho ho ho — affect their objective ‘reporting’ on the EU. Those same citizens are too quick to condemn Russia Today television as being a “Kremlin” tool, without even knowing that what their watching on their TVs about the EU is the epitome of fake news. The 10bn euro pipeline built by Gazprom is just the latest comedy which allows MEPs like Verhofstadt to call for “unity” and “standing up” to Russia. But how does an infant stand up to its towering, older brother how feeds him and keeps him warm? And when was the last time the EU had “unity” on anything big?