As Europe’s vaccine rollout lags, COVID cases are exploding in Europe right now, prompting several member-state leaders to warn of an imminent “third wave” of the virus. As Nate Silver pointed out on twitter earlier, the EU and UK had similar rates of COVID cases per capita a month ago, while the US rate was about 30% higher. Now, the EU (slow vaccine rollout) has about 2x as many cases per capita as the US and 3-4x more cases than the UK. 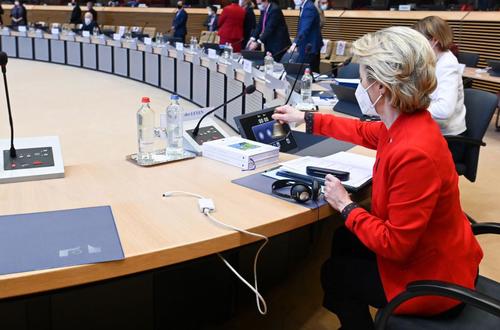 On Tuesday, the EU added more newly confirmed COVID cases than the US and the UK combined, with 303.6 cases per million people in the EU, vs 165.4 and 84.9 in the US and UK. The number of new cases is growing as worries about mutated COVID strains amplify concerns about the EU’s slothful pace of vaccinations. 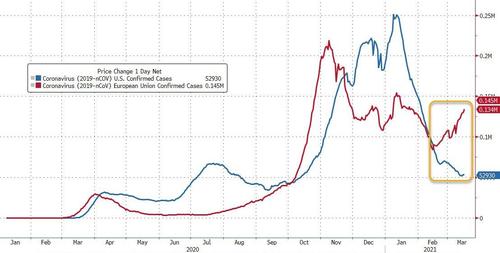 COVID deaths in the EU have topped 550K this week while fewer than 1/10th of the blocs adults have been vaccinated.

Now that some two dozen countries have halted the AstraZeneca-Oxford COVID jab, experts are worried that the pace of vaccinations will slow further as more Europeans decline to receive the shot. As Bill Blain wrote earlier, the EU’s vaccine rollout is “in tatters”, and the AstraZeneca controversy is only making the situation worse. The EMA, Brussels’ equivalent to the FDA, has launched a hasty safety review of the vaccine while reiterating that any risks posed by the vaccine are far outweighed by the benefits. Now, the WHO is reiterating that line, as officials appear to finally be coming to terms with the fact that they have no credibility to claim that the vaccine is perfectly safe. After all, the accelerated testing period makes it virtually impossible to address any more-rare risks posed to patients with various medical conditions.

But member state from Italy to Austria have reported cases of rare blood clots forming in patients with low blood-platlet counts. In one instance, a man died after receiving the vaccine. And while there’s no evidence of a direct link, the Italian prosecutors have launched a manslaughter investigation.

As the bloc’s vaccination rate continues to drag…

…Brussels’ bureaucratic leaders are sticking it to the WHO (which has issued myriad statements decrying so-called “vaccine nationalism”) as EU Commission President Ursula von der Leyen threatens to withhold more vaccine exports from the UK as a spat over the terms of the Brexit split intensifies, and the UK’s vaccination numbers far outpace numbers from the Continent.

Per Bloomberg, with the EU struggling to accelerate vaccinations, von der Leyen says the bloc will consider blocking supplies to countries that aren’t reciprocating, or which already have high vaccination rates, with the UK singled-out as the No. 1 importer of shots from the EU.

“We have observed that in the last six weeks, 10 million doses have been exported to the UK,” von der Leyen told reporters in Brussels. “The UK is producing AstraZeneca. In our contract with AstraZeneca there are two sites in the UK that are put in the contract for potential deliveries to the EU.”

Von der Leyen also reiterated warnings about a third wave that have been repeated by many bloc leaders and health officials.

“We are in the crisis of the century,” she said. “We see the crest of a third wave forming in member states, and we know that we need to accelerate the vaccination rates.”

Confirming just how critical the AstraZeneca jab is to the EU’s vaccination vision, the EU has blamed members states’ sluggish rollout on AstraZeneca’s failure to meet its delivery commitments, and fumed that 10M jabs produced in Europe have already been exported to Britain. Some critics have noted the hint of jealousy in Brussels’ criticisms of the UK rollout.

“If this situation does not change, we will have to reflect on how to make exports to vaccine-producing countries dependent on their level of openness. We will reflect on whether exports to countries with higher vaccination rates than us are still proportionate.”

“All options are on the table. We are in the crisis of the century. I am not ruling out anything for now because we have to make sure that Europeans are vaccinated as soon as possible,” she said, when asked whether the EU should invoke Article 122 of the EU treaty. The clause allows the introduction of emergency measures when “severe difficulties arise in the supply of certain products.”

European Council President Charles Michel has raised the prospect of invoking Article 122 as a way to get the vaccinations back on track. That would allow Brussels to offer more financial assistance to member states, and take other emergency measures.

“Vaccine production and vaccine deliveries in the EU must have a priority and I also want to discuss this whole picture with the heads of state and government,” von der Leyen said.

While threatening to withhold vaccines produced by AstraZeneca and others from the UK, EU officials have also been slamming the leaders of some of the bloc’s biggest member states (Germany, Italy and France) who have insisted that, while they’re “ready” to resume vaccinations with the AstraZeneca jab, they will wait until after a safety review set for Thursday.

Parler Back From The Dead As CEO Posts New Message