As the Biden administration shows no signs of slowing the money-printing (in fact quiet the opposite), it would appear, as we noted previously, that the rest of the world is not enjoying the concomitant dollar depreciation and is starting to fight back (with words for now).

With the euro recently soaring back near 6 year highs, ECB Governing Council member Klaas Knot told Bloomberg this morning that the Central Bank has the necessary tools, including interest-rate cuts, to prevent any further strengthening of the euro undermining inflation.

“That is something we of course monitor very, very carefully,” Knot, who heads the Dutch central bank, said in a Bloomberg TV interview on Wednesday.

And in what sounds like fighting talk, The ECB has agreed to look deeper into whether the euro’s gain versus the dollar since the start of the pandemic is driven by differences in stimulus policies compared with the U.S. Federal Reserve, according to officials familiar with the matter.

“There is still room to cut rates, but of course that would also have to be seen in conjunction to our overall monetary stance, which is determined by a multiplicity of tools — asset purchases, TLTROs, forward guidance — they all come into play.”

The reaction was swift as the euro fell… 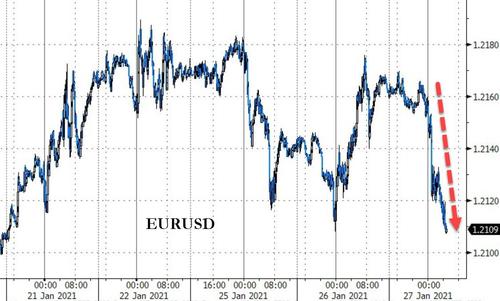 As Daniel Lacalle noted just yesterday, devaluing is not a tool to export, it is a tool to disguise structural imbalances and always harms much more than it benefits.

Unfortunately, in the United States, there are voices that want to “weaponize the dollar” (politically intervene the currency) defending the obsolete and pointless policy of devaluation,  which would be the biggest mistake in history and put the US economy and its status as a reserve currency at risk.

If the world gets into a currency war, with the assault on wages and savings that devaluation entails, no one wins.

A currency war is a war against citizens, their salaries and their savings, to benefit inefficient and indebted sectors.

A currency war would devastate the purchasing power of salaries and suppress investment and consumption decisions. When governments attack the currency, the economic agents’ reaction is not to invest and consume more, but a generalized slump in spending and capital allocation.

If a country enters a currency war, it disproportionately hurts its own citizens. If China, the Eurozone, Russia and the US do it, it will likely lead to a severe global crisis.

A currency war is not about who wins, but who loses the most. And if countries embark on an assault on their citizens’ wealth via devaluation the message to the world is only one: buy true reserve of value assets, like gold or silver, and hide.

“People Are Fed Up”: California Out Of Excuses As Coronavirus Defies Militant Lockdowns