Even The Banks Are Bailing Now: Dealers Dump Record Amount Of Treasurys

The 10Y just tagged the March 5 high yield of 1.625% – a key stop loss level – and steamrolled higher amid a cascade of short covering, because as noted earlier, once the momentum kicks in nobody knows where and how it stops. 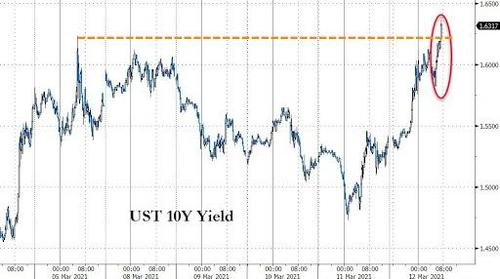 And unfortunately for TSY bulls, the pain could be just starting because as BMO’s Ian Lyngen noted, those hoping for a contrarian buying signal from the banks/dealers will have to wait a long, long time. That’s because the latest weekly data (ending March 3), showed that the primary dealer holdings data revealed a record $64.7Bn decline in Treasury holdings to $185.8 bn! 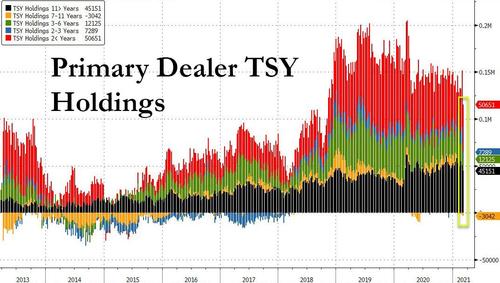 And while BMO notes that -$23.5Bn of this was in the bill sector and -$3.7Bn in floating rate notes; notes and bonds were clearly puked as shown in the chart above. What this means is that, according to the BMO rates strategist, “given the preceding spike in yields and the fact these figures are reported in market value rather than par terms, “the drop reflects more than simply dealers aggressively shedding Treasuries as the extension of SLR became less certain.” (as a reminder, “Goldman Does The SLR Math, Stumbles On An Huge, $2 Trillion Problem“).

But a bigger problem emerging is that we are now nearing that inflection point in the market when traders recall that more than 100% of all US net Treasury issuance in the past year was monetized by the Fed, and with everyone now selling – including hedge funds, CTAs, and primary dealers – it will be up to central banks to step up their intervention and prop up the bond market once again, or all those fans of MMT who have zero comprehension about how anything works in the real world, will realize just why we have been it Magic Money Tree all these years, and that without the Fed purchasing debt, there is simply no more “magic”…