Excess Liquidity In The Eurozone Has Doubled To €4 Trillion In One Year: What Are The Costs

Excess liquidity in the Eurozone breached €4TN this week, having been around €2TN a year ago. It will continue to grow, albeit at a slower pace going forward, as purchase programmes are ongoing (assuming a tapering of PEPP) and with much less of a contribution expected from TLTROs.

Today’s chart considers the cost of this liquidity to the banking system in aggregate. A simple metric considers the liquidity charged at deposit rate versus the amount earned via the TLTRO (assuming the lending benchmark is met and subdepo pricing is attained). 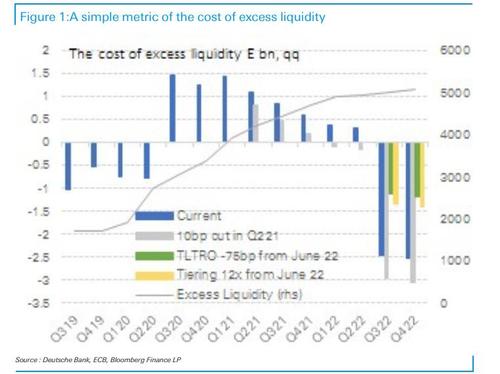 When tiering was introduced in 2019, the cost of the excess liquidity (ie, that charged at the deposit rate) roughly halved. In early 2020 it rose again as lockdowns necessitated interventions, and thereafter the upgraded TLTRO3 terms have resulted in a net boost for the banking system. The window in which banks can earn -1% currently ends in June 2022, and the effect, given the rise in excess liquidity, is stark.

The simple exercise also illustrates why the ECB is likely to have to revisit the TLTRO3 terms as the end of the special rate window approaches. An extension (potentially at less favourable terms) is a plausible outcome, but so is a rise in the tiering multiplier. Whilst ECB has doubled down on the TLTRO, it’s worth noting the SNB and BoJ have both over time adjusted the exemption thresholds to alleviate the cost of negative rates (and overnight rates have moved higher over time).

The impact of either option on the front end differs, and will depend on calibration. The market is currently pricing around 3bps of cuts, where the trough is in the reds; this could also partially reflect the risks of a trend lower in the fixings as excess liquidity continues to grow. However, as can be seen, a 10bp cut to the deposit rate contributes substantially to the net cost, and will likely have to be accompanied by other mitigating measures that could also reduce its pass through.

Record Investor Euphoria Is Now Literally Off The Chart