Exxon is an odd stock: one day after extremely bullish news hit that the company had negotiated a potential merger with Chevron in what clearly was a trial-balloon, the stock slumped. Yet on Tuesday morning, with Exxon reporting its first annual loss in 40 years, the stock us jumping.

For the fourth quarter, Exxon posted a previously disclosed $19.3 billion writedown of U.S. natural gas and other assets, capping the first annual loss for the Western world’s largest oil company in at least four decades. However, excluding the historic impairment, Exxon returned to profit in the fourth quarter, earning 3 cents per share, above the 0.02 consensus estimate, and ending a run of three consecutive quarterly losses. 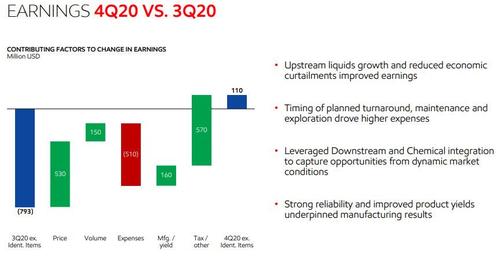 Some more highlights from the Exxom report: 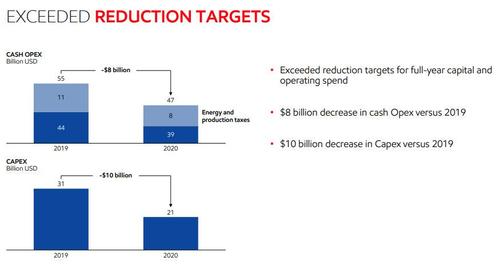 Some more details on the XOM production front: 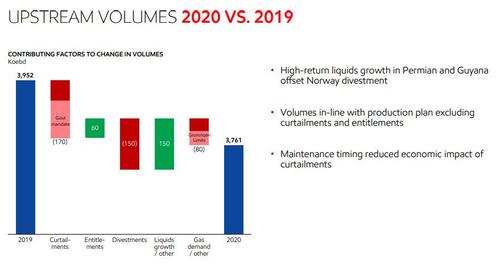 Some context: Exxon’s full-year production was just 3.76 million barrels of oil equivalent per day in 2020, the lowest since its merger with Mobil some two decades ago, according to Bloomberg data.

As Bloomberg notes, Exxon is emerging from the wreckage of 2020 facing the worst crisis in its modern history. In addition to growing criticism of its environmental record, financial performance has eroded to the point where its fabled dividend, the third-largest in the S&P 500 Index, is under pressure. Exxon extended the $3.7 billion payout for another quarter last week but hasn’t increased it since early 2019 and is relying on borrowed cash to sustain.

That said, the company did go all-in on its defense of its massive dividend, with Bloomberg noting that “gone is any wiggle room on its statement: the company is pledging investors that even if oil prices average $50 a barrel (Brent basis) in 2021 and refining margins are horrendous, it would make enough money to cover both shareholders payouts and spending in projects.”

This means that XOM has a remarkable 8% div yield – one of the wonders of the NIRP world – when German bunds yield -0.5%; if and when oil rebounds further, expect this stock – which has the highest leverage to the price of oil – to soar. 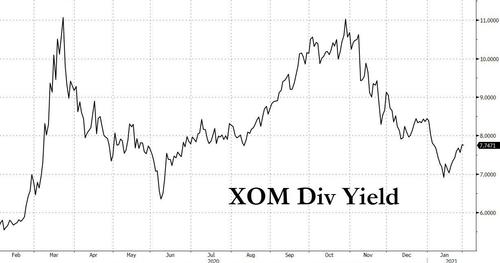 Furthermore, the company also made it very clear that if prices drop lower (to $45 a barrel), it would sacrifice spending (and therefore growth) to protect the payouts. “Exxon is, in effect, saying that it isn’t BP or Shell, which cut the dividend last year” as Bloomberg puts it. For a company besieged by activist investors, policy makers, and climate-change campaigners, it’s a big statement. It’s trying to curry the favor of investors with a tool that always worked for Exxon: money.

And yet, the stock refuses to give XOM credit for its commitment to its dividend. In fact, such was the pressure exerted by last year’s price collapse that Exxon’s Chief Executive Officer Darren Woods held preliminary talks with his counterpart at Chevron Corp. about a megamerger, the Wall Street Journal reported Sunday.

Separately, while Exxon’s debt levels surged in 2020 they have now also come under control. Total debt was $67.6 billion at the end of 4Q, up 44% from a year earlier but relatively static now for the past three quarters. 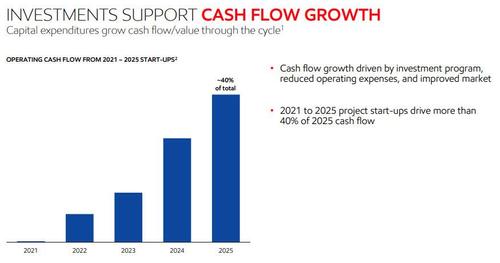 … even though Exxon’s growth will likely be severely challenged over the coming years, despite roaring production from Guyana and the Permian Basin, its two key projects. The reason: protecting the dividend has come at the expense of massive capex cuts which limit the growth potential. No new changes today but this chart shows how much future investment has come down vs the company’s 2018 projections (courtesy of Bloomberg).

Exxon isn’t alone in facing serious challenges even as commodities are on a tear. Chevron disappointed investors at the end of last weak with a surprise loss grounded on weaker-than-expected refining margins. Earlier Tuesday, BP squeezed out a small profit that was a fraction of what the explorer earned in pre-pandemic days. ConocoPhillips posted a third consecutive loss.

To meet his targets, CEO Darren Woods has taken an axe to capital spending and operating costs, all but abandoning his circa 2018 blueprint for expanding output while drilling and construction costs were low. Exxon announced 14,000 job cuts, delayed megaprojects from the Permian Basin to Mozambique, and has pledged to keep a tight rein on spending through the middle of this decade. The cutbacks helped turn Wall Street analysts more positive on the stock, with most banks upgrading it the stock to a Buy in December; expect more optimism especially with oil prices rebounding this year (Brent just hit $57/bbl the highest since Jan 2020) but investors are still nursing deep losses after a 41% plunge in 2020 and years of underperformance compared with peers.

Finally, the activists are also all over XOM, assuring even more upside: as Bloomberg reminds us, last Wednesday, activist investor Engine No. 1 formally took up the cause for a change in strategy, nominating four directors to the board ahead of Exxon’s annual meeting in May. The investor, which has the support of the California State Teachers’ Retirement System, is calling on Exxon to invest more in clean energy, commit to reducing emissions and improve returns on capital.

XOM stock was a little higher on the Q4 earnings, after inexplicably tumbling on Monday following the Cheveron merger report. 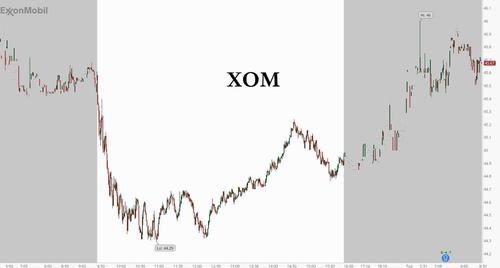