Having soared in recent days, rising 21% YTD on the back of the gamma squeeze discussed yesterday, and coupled with a barrage of analyst upgrades, most recently from Barclays and JPM, Exxon stock dropped as much as 4% this morning, after the WSJ reported that the SEC has launched a prove of the energy giant after an employee “filed a whistleblower complaint last fall alleging that the energy giant overvalued one of its most important oil and gas properties.”

According to the WSJ, in the latest amusing “whistleblower complaint”, several people involved in valuing a key asset in the Permian Basin, currently the highest-producing U.S. oil field, “complained during an internal assessment in 2019 that employees were being forced to use unrealistic assumptions about how quickly the company could drill wells there to arrive at a higher value.”

At least one of the employees who complained was fired last year, according to a person familiar with the matter. The Journal previously reported that there had been internal disagreements over the valuation.

Which is great… the only problem is that absolutely every other US E&P and shale company, and in fact every energy company period, uses a similar “unrealistic” approach to valuing assets. In fact, one can argue that Aramco is the biggest offender of all, although there may be other “considerations”  there.

The SEC began investigating the claims after receiving the complaint, people familiar with the matter said. The current status of the investigation is unknown according the WSJ.

The news was enough to hammer the stock, which dropped as low as $48.3 before rebounding as traders realized that Exxon isn’t doing anything that all of its peers aren’t also doing. 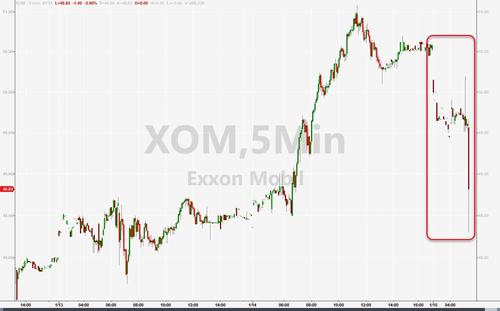 Why America Decays: The Tyranny Of Self-Interest

Sanctions Set America On The Path To War, Claiming Lives With No Benefit