The F35 is the greatest boondoggle in American history, as one writer says, “too expensive to use, too expensive to lose”. Over its lifespan, it will cost the American taxpayer $1.7 trillion. An F35B costs $138 million dollars and over $36,000 an hour to operate. 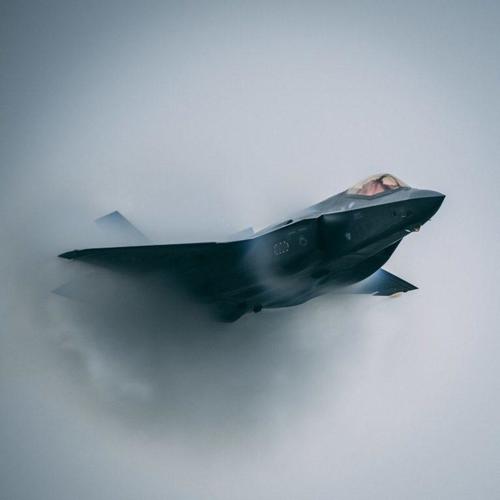 Intended to replace the F16, the F35 is slow, maneuvers sluggishly and cannot fire its new lightweight Gatling without destroying the housing and the airplane.  It suffers from 13 “class one” defects that endanger both the aircraft and its crew. And 871 flaws that must be corrected before it can be fully operational—in 5 years.

Still, the US has managed to force this aerial junk on a lot of its allies, most recently the UAE, which has prompted the Israelis who have two squadrons of the F35 and mostly use it for PR, to ask for the F22, which, of course, they can only afford to buy with American money.

Last year, there were reports that the Syrians had downed an F35 over Syria with a Soviet era S200. The Israelis claimed a bird did it—over Israel. Nobody really knows.

The Syrians certainly shot something down!  And it wasn’t an…um…bird.

However, it is unlikely that the Israelis are using the F35 over Syria. Losing an F35 to the Syrians–especially to a large anti-Zionist Syrian crow – would be too big embarrassment. Most IDF strikes inside Syria seem to have been carried out by F16s, which are faster, carry more ordinance and have the maneuverability to avoid incoming missiles if they detect them early enough.

“You cannot operate an F-35 in the vicinity of an S-400. They won’t talk to each other, and what the two systems will attempt to do, certainly the S-400 against the F-35, is attempt to exploit the F-35’s capabilities.”

The US, of course, has been using the F22 in Eastern Syria and Iraq within range of Russian systems, which now reportedly can detect even this more capable stealth aircraft.

Yes, the Americans tried out the F35 in Afghanistan, since locals throwing rocks weren’t much of a threat. The sales point of the F35 is “stealth”, which is only fine–when your opponent doesn’t have much in the way of advanced radar equipment.

“Stealth” is not invisibility.

An S400 real time anti-stealth radar system can certainly pick up even a large bird-sized object, at 150 km, especially when moving at 700km per hour, which is a giveaway.

The Russians have yet to allow S300 or S400 launches in Syria thanks to a tacit agreement with the Israelis not to exacerbate regional tensions: so, it is not just that the very, very pragmatic Israelis don’t want to use the unreliable F35 over Syria, whose antiaircraft systems to be so much more sophisticated than, say, Lebanon—they don’t want to provoke the Russians.

The last time they did that, the Russians supplied the Syrians with the S300–albeit keeping control of these systems.  The warning is obvious:  there are redlines.

But, as in the Yeltsin years in Russia, the US government works for the nation’s oligarchs, a country for Big Tech, by Big Tech, of Big Tech.

Since the US has had to fight a war on its own soil, the nation’s “defense” industry is a malapropism:  all its wars are offensive. If the weapons don’t work too well — it doesn’t matter–because the US doesn’t fight anyone but third world countries.  The more expensive and complicated the weapons are, the better it is for he companies that make them. How else can a poor CEO buy that second island in the Caribbean and a new private jet?

It also doesn’t matter that the America lost to little Vietnam, ended up losing Iraq to Iran, and soon leave Afghanistan, its tail between its legs.  It is even losing in Yemen.

Of course, bullying other countries is more of a problem when your equipment doesn’t work.  The new USS Ford, super carrier in the South China Sea?  It can’t launch its aircraft.  The UK’s new carrier which is supposed to show the flag against China?  Its F35Bs can’t fire their guns.  In any case, carriers are nice targets for hypersonic missiles.

The Russians and Chinese do defense differently – because for them it actually is defense.

When Putin took over, he made it clear to the oligarchs who previously owned the country that they either deferred to the State, or got out. Some went to prison. Some got out. Russia is still very unequal but the Rich toe the line just as they do in China.

When the Ministry of Defense is not satisfied with a military product, either in terms of cost or performance, it simply cuts orders.  This was the case with the Su57.  Originally, the government had envisioned putting up to 250 of these aircraft into service by 2025. Now, Russia will get 76 aircraft at a 20% reduction in cost, with better engines, hypersonic weapons, electronics, improved stealth and general finish.   And the Su57 will cost about $35 to $40 million each compared to the 138 million of the 35B or the $300 million of an F22. One reason for the discrepancy is that US companies expect the taxpayer to pay R&D and developmental costs, which are added to the flyaway cost.   Of course, the companies use that R&D for lucrative commercial projects as well.

Russia doesn’t have money to spare. It is still recovering from the Yelsin years and massive inequality. So it keeps defense companies in line.

The Su57 is a good example but also the T-14 (Armata) tank, where orders were slashed until the contractor promised to a. reduce costs; b. address performance issues.

Putin made clear that Russia is a developing democracy.  In the end, the people will rule, oligarchs or not.

By contrast, the US is an “inverted totalitarian state”, or, if you like a “managed” democracy. It is not really a modern state in germs of governance, since it is defined by an 18th Century constitution and institutions, designed to prevent rather than enable democratic rule. The US loved Yeltsin because his “system” was really theirs.

The Worse Things Get, The More The Stock Market Likes It

Learning To Live With Crypto