Another day, another fiasco in the life of Boeing. 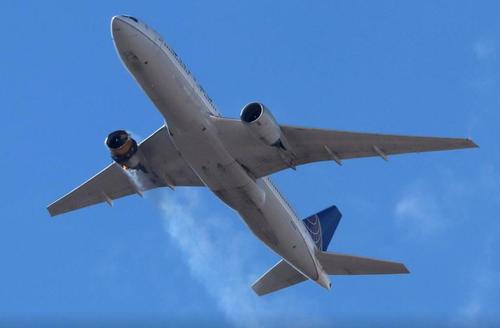 Just days after it started to appears that Boeing may finally emerge from its 2-year old debacle when the combination of the 737MAX crash and the covid travel slump cratered Boeing stock when the company reported solid earnings despite guiding to another “unexpected” delay in the rollout of 777X, on Sunday night U.S. aviation regulators ordered emergency inspections of fan blades on the type of engine that failed Saturday over suburban Denver, spraying metal debris over a wide area.

From the Dash Cam of Zach Allen In Broomfield: https://t.co/6Syowuy9yI pic.twitter.com/SVqE55TlPN

Wow! Mark Moskovics’ Ring camera caught the moment this piece of debris came crashing down in his neighborhood in Broomfield. You can also hear other pieces coming down off-screen @CBSDenver pic.twitter.com/bnQI4MVGSo

FAA Administrator Steve Dickson said in a statement late Sunday that officials ordered the inspections after examining the hollow fan blade that failed, triggering the failure Saturday; the directive covers Boeing 777 airplanes equipped with certain Pratt & Whitney PW4000 engines and it “will likely mean that some airplanes will be removed from service.”

Dickson said the initial review of Saturday’s engine failure shows “inspection interval should be stepped up for the hollow fan blades that are unique to this model of engine, used solely on Boeing 777 airplanes.”

According to Reuters, United Airlines is the only US operator with Boeing 777 airplanes that use the Pratt & Whitney PW4000 engines covered in the directive.

Meanwhile, Japan’s Civil Aviation Bureau ordered operators of the Boeing 777 involved in Saturday’s incident to halt operations, according to the FAA. This means that ANA Holdings and Japan Airlines will ground Boeing 777 planes they operate indefinitely. ANA operates 19 planes and JAL 13 with Pratt & Whitney’s PW4000 engine that saw a failure with United Airlines plane.