Authored by Matt Agorist via TheFreeThoughtProject.com,

Dr. Ron Paul who has been a champion of peace and liberty for decades was unceremoniously blocked from his own page on Facebook Monday. Facebook claimed Ron Paul, who has long promoted everyone getting along, civil liberties, police accountability, and ending US wars, was repeatedly going “against our community standards.”

“With no explanation other than “repeatedly going against our community standards,” Facebook has blocked me from managing my page. Never have we received notice of violating community standards in the past and nowhere is the offending post identified,” Ron Paul tweeted out Monday afternoon.

The only thing we posted to Facebook today was my weekly “Texas Straight Talk” column, which I have published every week since 1976.

This happens to be the exact same notice the Free Thought Project received at the end of last year. We never once got a warning. We never once published anything false, and we always promote peace and liberty. Coincidentally, despite not supporting Trump and calling out his crimes and the deceptive tactics of Qanon for four years, nearly every single person involved with the Free Thought Project received a 30 day ban on Friday as part of the mass purge of Trump supporters on Twitter and Facebook.

Dr. Paul’s ban is exceedingly egregious given the fact that he has never once advocated violence, nor did he support the march on the capitol last week. Instead, Paul has been an outspoken proponent for breaking through the two-party paradigm and addressing issues that actually affect our lives like the police state, big government, and the Federal Reserve’s control over the U.S. monetary system.

Few people in modern history have spawned an awakening of the masses like the former Congressman. Throughout his tenure in Congress, Ron Paul was known as ‘Dr. No’ because he voted on 100% principle. Unlike any of his peers, Ron Paul was often the single ‘no’ vote on many issues. He never voted for wars, or to advance the police state, or to bailout big banks and corporations. He was a true hero to freedom. 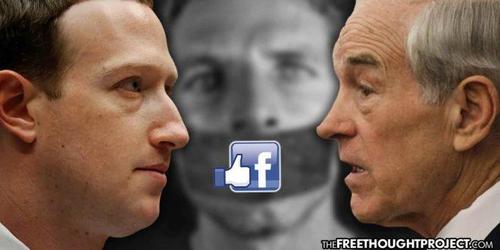 One of Ron Paul’s most defining moments of his career was waking people up to the corrupt history of the Federal Reserve and the problems this privately owned central bank causes throughout the world. He even wrote a book about it, while he was still in Congress, titled, End the Fed.

Since his days in Congress have ended, Dr. Paul has dedicated his life after D.C. to continue spreading the message of liberty. For several years, he has run the Liberty Report which covers the current practices of government corruption along with many other issues.

Through banning Paul, Facebook is essentially telling the world that it is pro-war, pro-police state, pro-Federal Reserve, and pro-cronyism in general. As he is non-violent, pro-peace, and pro-free speech, Ron Paul poses no threat of inciting violence or armed insurrection. For simply being anti-corrupt establishment, he was banned. This is huge problem.

It is no secret that Facebook is a leviathan of corruption, censorship, spying, and an outright divide-stoking platform that has been a part of facilitating a massively bicameral society that is ripping apart. Thanks to its algorithms that keep users in their own partisan bubbles, billions of people across the planet who get most of their information from Facebook, have fallen into a bias-confirming slumber and react with anger, and sometimes violence, when presented with factual information that challenges their Facebook-constructed world view.

It is leading to mass ignorance, the shouting down and eventual censorship of peaceful ideas, and hatred for our fellow man. Social media, and the mainstream media have almost single-handedly fanned the flames of the fire of divide in which we currently find ourselves.

Even former high-level executives inside Facebook have come forward to attempt to alert the world to technocratic dystopia this social media platform is creating. For years, the Free Thought Project has been screaming this information from the rooftops. Yet it was never bad enough for most people to pay attention. Well, now it is.

As anyone with half a brain understands, censorship does not stop ideas from spreading. Bad ideas need to be defeated in the public arena of debate. When you ban them, you not only prevent them from being defeated in the public arena, you give credence to those who espouse them. These tech giants know this, which is why the conspiracy theorist in me thinks they are attempting to provoke a horrifying response.

As we reported this week, three individual, unelected, unaccountable corporate monopolies (Amazon, Google, Apple) colluded to silence political content with which they disagreed. Joe MAGA, who may be on the verge of snapping, whose been unemployed for a year, arguing about ridiculous Qanon theories on Facebook, only to be banned and pushed to Parler, and then banned once more, is thinking to himself right now that the establishment is out to get him and he’s right. Unfortunately, thanks to this attack on anti-establishment voices, thousands of Joe MAGAs are likely googling the ingredients for pipe bombs, right now.

Just like the war on terror creates more terrorists, censorship is wind in the sails of extremism.

The reaction to the chaos at the capitol by big tech and the establishment will undoubtedly make things far worse, thereby allowing the feds to roll out even more draconian measures in the name of national security. Most Americans will accept these measures in the name of “keeping them safe,” and freedom will die with nary a whimper.