Authored by Raul Ilargi Meijer via The Automatic Earth blog,

The Washington Post said recently: “The anti-vaccine movement is comparable to domestic terrorism, and must be treated that way”, while the Guardian had this:

“When it comes to shifting attitudes to vaccines, it is crucial to distinguish between public information campaigns that seek to educate the public and those that seek to persuade them,” said Philipp Schmid, a behavioural scientist researching vaccine scepticism at the University of Erfurt. “[..] if you don’t proactively tackle the problem at all, you end up playing catch-up with the anti-vaxxers. In a way, governments have to work on a parallel vaccine rollout – immunising the public against science denial.”

But WHO spokesperson Margaret Harris said: “it’s very important for people to understand that at the moment, all we know about the vaccines is that they will very effectively reduce your risk of severe disease. We haven’t seen any evidence yet indicating whether or not they stop transmission.” And Dr. David Martin claimed: It’s Gene Therapy, Not a Vaccine. One might add: It’s not science, it’s a sales job.

Now, I don’t know exactly who the WaPo refers to when they say “the anti-vaccine movement”, or that German guy with “the anti-vaxxers”, but it appears there is a widespread movement going on to promote mRNA vaccines, both by governments and by the press. And we’re not supposed to ask questions. Well, I’m sorry, but I make a living asking questions. And I think asking questions is not just everybody’s right, it’s an obligation. So don’t come at me with “domestic terrorism” or “anti-vaxxers”, a term that has nothing to do with the topic to begin with. Asking questions is not the same as being against something. 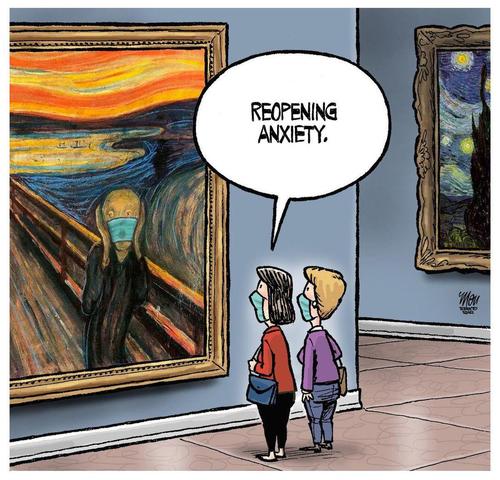 In essence the Pfizer and Moderna mRNA substances are a giant experiment, nothing else. If you can tell me what the logic is behind injecting -soon- hundreds of millions of people with something about which the WHO itself says: “we haven’t seen any evidence yet indicating whether or not they stop transmission,” try me. And how you get from there to issuing “vaccine passports” is as puzzling as the entire propaganda campaign. Who’s engaging in “science denial” here? In its core essence, an Emergency Use Authorization is unscientific.

A vaccine used to mean something that relied on -mostly- dead virus material to get your body to produce immunity “material”. What mRNA does -in this case – is force your body to produce an S1 spike protein, which is toxic to your body. Someone compared it to sticking a USB stick in your body, but one you can never take out anymore. Actually, it’s more like sticking such a USB stick into -almost- every single cell of your body. Forever.

Can it be successful? Maybe, but we have no idea. No research. No clue what mRNA does in the long term. There’s a lot of concern about what it might do to our immune systems. So lots of questions. But we’re not allowed to ask those questions, because then we’re domestic terrorists. Or maybe we can ask them, but only after getting inoculated.

There’s an eery similarity here to the banning of Huckleberry Finn, the Odysseus, and Dr. Suess. We apparently cannot be trusted to form our own opinions anymore. And if we apply the same rules that got Mark Twain and Dr. Suess banned, how on earth can the Bible remain politically acceptable? I’m sure they’ll get to that yet.

And the press help shape this new world, and Big Tech becomes Big Brother. There’s nothing either journalists or 20-something social media “guardians” like more than to tell you what you can see, hear, read or think, and I bet you never imagined that’s what George Orwell imagined. Or Mark Twain, for that matter. There is no real difference between banning books and burning them.

The way this is broadcast to us, is that the mRNA substances are safe, based on the fact that not too many people have died from being “vaccinated”. But not only are short-term effects not the main worry about them, there are already plenty headlines like this:

When you see that in Germany, France and Switzerland, half of care home workers don’t want to get vaccinated, perhaps it’s good to ask a question. Or how about this: “About 60% Of Nursing Home Staff Declined Covid Vaccines, Walgreens Exec Says”, about which Whitney Webb tweeted: “Just wondering if people consider the 60% of nursing home staffers and 1/3 of US troops declining the experimental COVID-19 vaccine to all be “crazy anti-vaxxer conspiracy theorists”

I apparently have to be afraid of what reading Huck Finn or the Odysseus will do to me, my brain, the brains of my children and neighbors. But I’m not afraid of that at all, I think the books will enrich their brains, as they have mine, and I’m confident they will be able to figure out what is just and right in the words they read, and what is not.

I’m not overly concerned about Covid19, but I do take a cautious approach. Which means taking vit. C&D and zinc, with ivermectin in my near future. But it doesn’t rule my life, certainly not as much as the lockdowns in Athens do. And frankly, I’m more afraid of sticking a genetic USB stick that generates untested genetic material in my body for the rest of my life, than I am of a virus that is unlikely to kill me.

By now we should be asking what being ruled by fear for a prolonged period of time does to the mindset of not just individuals, but of entire societies. Well, for one thing, it makes it much easier to censor people’s thoughts and actions, to shape their lives before they themselves do it. Be very afraid, roll up your sleeve, and don’t ask questions. And if you behave the way we tell you to, you may be able, in a year, or two, three, to return to the “old normal”.

Which unfortunately absolutely certainly will no longer exist once you get there. Your society will instead look like a warzone because its economy has been ravaged by fear. For one thing, if “they” allow stores, bars, restaurants to reopen this summer (doubtful), it may well be because they can no longer afford the emergency support for businesses and workers. The very first thing to happen then is mass lay-offs. Which will snowball into more businesses closing and more lay-offs.

It’s simply all gone on too long. For our economies, our societies and our minds. And if only to help us (re)cover, we should ask questions. It’s a obligation.

I like this from John Scott Lewinski on fear:

The Covid-19 pandemic has warped humanity’s mindset, turning fear into an intellectual value. Panic is now the smart choice, and those who reject it are considered dangerous barbarians. Sociologists, political theorists and other experts credit the ongoing coronavirus pandemic with forging countless changes in global society. Some are practical, some psychological. Some are temporary, while others will remain in evolving forms.

It’s difficult to deduce if the most troubling change we’re seeing really resulted from the viral crisis, or whether it had been waiting under the surface noise of daily life for full exposure by Covid-19. For the first time in human history, fear is now considered a sign of intellectual superiority, while the choice to resist panic is seen as stubborn foolishness.

[..] If you don’t stay locked in your bedroom in favor of going about your life – still masked, scrubbed and distanced – you’re a fool. Even worse, you’re a reckless fool who lacks compassion for the people you might infect. Regardless, the underlying theme is “crisis” and desperation in place of “challenge” and problem solving.

[..] Finally, if we allow a little old-time religion into the fray and check in on the Gospel writers, we’re told Jesus wept in fear the night before defeating its temptations and facing the crucifixion. Halfway around the world, the Buddha stated: “The whole secret of existence is to have no fear. Never fear what will become of you.” The current psychological zeitgeist would ridicule all of those figures or those authors and their protagonists as hasty and brainless for not running away and hiding from a threat indefinitely until it did its damage or decided to go away.

Those in the cult of alarm will say all of those references are fiction, and Covid is real life. I would motion over to Joseph Campbell and remind them that myths and their fables indicate cultural values. No one ridiculing their fellows for not wearing a mask while alone in their cars, dining outside of their own kitchens or even longing to get back to their workplaces has any part to play in any stirring touchstone story or in the real world events that inspire them.

Perhaps this new worship of trepidation is another symptom of the coronavirus that will pass. Until then, we live in hope for a vaccine against our 2020 affliction of dull, self-adulatory dread.

Fear is a healthy and useful natural reaction to events. It can save your life. But it’s not healthy for an individual to live in fear for a prolonged period of time, and fear should never take on a mass identity. Entire societies living in fear for a prolonged period of time are highly toxic to their citizens. In war time, societies are saved not by those who fear, but by the individuals who refuse to let fear lead their lives, and turn it into bravery. Because, as the Buddha says: “The whole secret of existence is to have no fear.”

Brandon Smith: Is The Illegal-Immigration Crisis All About New COVID Lockdowns?