Back in the late summer of 2020, we urged readers to start rotating toward such “value” sectors as energy ahead of the coming re/hyper/re-flationary wave that would be unleashed by trillions in covid fiscal stimulus, whether under Trump or Biden (it would ned up being the latter). Others were also quite prescient, and none perhaps more so than BofA, whose CIO Michael Hartnett and Research and Investment Committee (RIC) head Jared Woodward had been pounding the table on getting out of growth names and into “value.”

Then. most recently, a little over a month ago Woodward flagged “bullish positioning and blind buying” of market “unknowns” – just as the Nasdaq hit it all time high amid record investor euphoria, that Citi needed a bigger chart to show it… 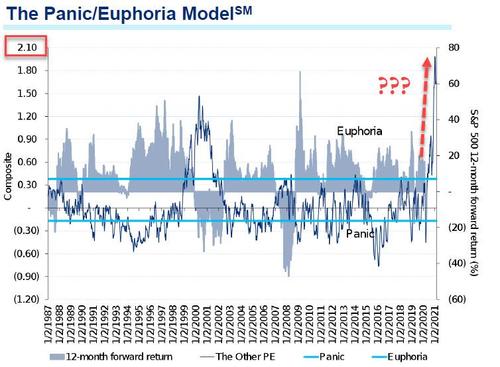 … as catalyst for a Q1 correction. What happened next was striking: risky assets peaked in mid-February with Bitcoin falling -26% peak-to-trough, SPACs -25%, The NYFANG index -17%, small-cap US growth -16%, and Chinese A-shares -14%. But not so much “value”: in fact as BofA shows in the chart below, February was the best month for value vs. growth since March 2001… which of course is when the dot com bubble burst. Everyone knows what happened to the Nasdaq after. 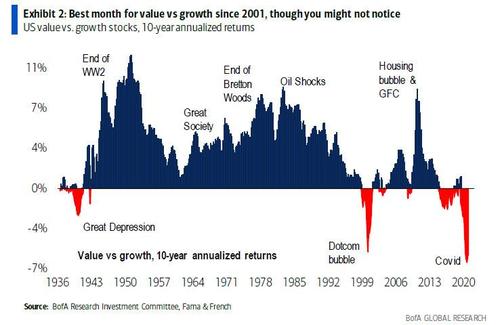 But while in the past such epic drawdowns in tech stocks at least led to a safe haven bid in bonds this time it was just the opposite for the simple reason that it was the puke in bonds that started the entire market rout. In fact, as Woodard shows, Treasuries have tumbled and are down -11% YTD, the third-worst start to a year since 1973. 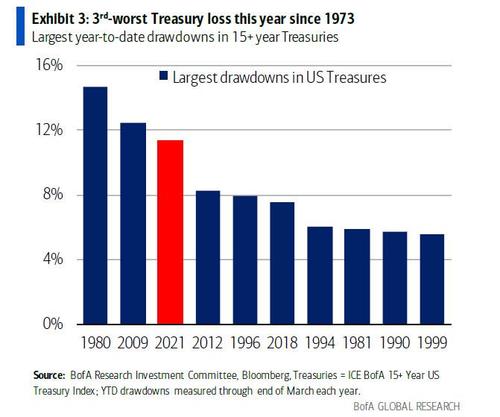 The pain is hardly over: should the selling persist into the summer when the market tests the Fed’s resolve to do YCC by pushing yields to 2%, BofA expects the 10-year Treasury to suffer an additional 8% in losses.

This means that the bad news for any 60/40 stalwarts (i.e., balance funds and risk parity) is clear: since the pre-COVID equity peak on Feb 19th, 2020, US stocks have rallied 13% while TLT has lost 4%, completely giving up any “hedging” gains during the March crash. And gold (-9% since mid-Feb. and -18% since August) is just another bond, with a 78% beta to Treasuries. In short, aside from value stocks and crypto, absolutely nothing has worked so far in 2021.

That said, as BofA notes “quite a lot of optimism about the reopening is already priced in”, and furthermore, we already have evidence of a big rotation to classic pro-inflation assets, which probably means that the great rotation is getting a modestly old. Indeed, Fund flows show that ETF investors have been buying floating-rate loans, energy, financials, and materials. And in bond markets, the spread between short- and long-term inflation expectations is the highest in the history of the TIPS market.

Which brings us to what BofA thinks is the most important question for investors in 2021: what will US households do with their extra money as the economy fully reopens? The consensus is that the record “savings glut” will be spent, but is the consensus right? BofA sees two possible outcomes:

Pent-up demand…for what? In a follow up post we will explain why Bank of America is skeptical that this time we will see a flood of spending – and no, buying stonks in hopes of getting tendies is not considered “money-multiplier” inducing spending in the Keynesian sense, even though according to many this appears to be the most likely outcome.

Marcuse-Anon: Cult Of The Pseudo-Intellectual