Update: That didn’t take long. JPMorgan just announced it would maintain its dividend and buy back $30 billion in shares, sending JPM up 5% after hours…

Bank stocks are up after hours following a statement from The Fed that the largest U.S. banks remain strong enough to survive the coronavirus crisis but warned that a prolonged economic downturn could saddle them with hundreds of billions of dollars in losses on soured loans.

Most critically for investors, The Fed said it would allow the banks to restart share buybacks but that it would, at least in the first quarter, restrict the amount. It also said it would continue to restrict dividend payouts.

Still, that was enough to break the stocks out of their recent range. 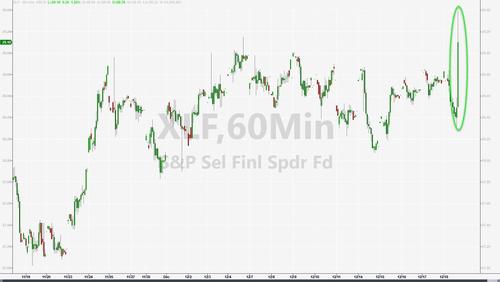 This has pushed financial stocks back to their highest since February…

The Federal Reserve Board on Friday released a second round of bank stress test results this year, which showed that large banks had strong capital levels under two separate hypothetical recessions.

“The banking system has been a source of strength during the past year and today’s stress test results confirm that large banks could continue to lend to households and businesses even during a sharply adverse future turn in the economy,” said Vice Chair for Supervision Randal K. Quarles.

The Board’s stress tests help ensure that large banks can support the economy during economic downturns. The tests evaluate the resilience of large banks by estimating their losses, revenue, and capital levels—which provide a cushion against losses—under hypothetical scenarios over nine future quarters.

Earlier this year, the Board conducted its annual stress test and additional analysis in light of the COVID event. Those results found that banks generally had strong levels of capital, but considerable economic uncertainty remained. In response, the Board put several restrictions in place to ensure that banks would preserve capital, including suspending share repurchases and limiting dividends. With the restrictions in place, large banks have recently built capital, despite setting aside about $100 billion in loan loss reserves.

This stress test includes two hypothetical scenarios with severe global recessions. The first scenario featured an unemployment rate that spiked to 12.5 percent and then declined to about 7.5 percent, while the second scenario included a peak unemployment rate of 11 percent followed by a more modest decline to 9 percent.

Under both scenarios, large banks would collectively have more than $600 billion in total losses, considerably higher than the first stress test this year. However, their capital ratios would decline from an average starting point of 12.2 percent to 9.6 percent in the more severe scenario, well above the 4.5 percent minimum. All firms’ risk-based capital ratios would remain above the required minimum.

In light of the ongoing economic uncertainty and to preserve the strength of the banking sector, the Board is extending the current restrictions on distributions, with modifications.

For the first quarter of 2021, both dividends and share repurchases will be limited to an amount based on income over the past year. If a firm does not earn income, it will not be able to pay a dividend or make repurchases.

The Board will continue to evaluate the resiliency of large banks and monitor financial and economic conditions.

According to the Fed, the results of the December stress test suggest that, in the aggregate, the 33 firms would experience substantial losses and lower revenues under the hypothetical recessions but could continue lending to creditworthy businesses and households. This is due, in  large part, to the substantial buildup of capital since the 2007–09 financial crisis and more than a doubling of loan-loss reserves during the first half of 2020. In aggregate, capital ratios remain well above their required minimum levels throughout the projection horizon under both scenarios.

Despite higher loan losses compared to the June stress test, projected provisions for loan losses are smaller. Provisions are projected to be $429 billion under the severely adverse scenario and $440 billion under the alternative severe scenario, while provisions were $489 billion for the June stress test. This difference reflects a significant increase in firms’ loan-loss reserves since the beginning of the year. If firms had maintained the same level of loan-loss reserves as in the fourth quarter of 2019, projected provisions would be about $100 billion higher for both scenarios in this stress test.

And here is what the Fed considers a “Severely Adverse Scenario”

Figures 3 through 8 illustrate the trajectories for some of the key variables describing U.S. economic activity and asset prices under the severely adverse scenario. 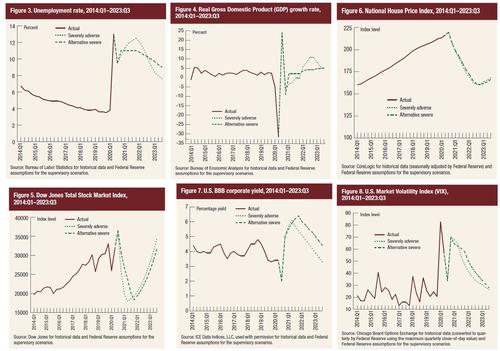 The international component of this scenario features sharp slowdowns in all developed country blocs, leading to recessions in the  euro area, the United Kingdom, and Japan. Developing Asia has only a mild slowdown in economic activity in the scenario. With the continued weakness in economic activity, all of the foreign economies included in the scenario experience sizable declines in their  inflation rates during the scenario period. The U.S. dollar appreciates against the euro, the pound sterling, and the currencies of developing Asia, but depreciates slightly against the yen, reflecting flight-to-safety capital flows.

The Wokies: Top 10 corporate panderers who plumbed new depths in 2020

Do It For The Kids: A Student Loan Solution