At the end of last year we discussed the likelihood of the US debt-limit exemption not being extended past the 31st of July as a force that would drive bond yields lower towards the Spring. The Treasury’s account at the Fed, now a considerable $1.6 trillion, would have to be drawn down, and the resulting fall in average maturity of Treasury debt held by the public would put pressure on longer-term bond yields and the yield curve, potentially fuelled by short covering of positions.

However, we stated the caveat was if the Democrats were able to also win the Senate, something they unexpectedly managed to do. The higher volume of fiscal stimulus now anticipated has helped drive yields higher, and the yield curve steeper in 2021. 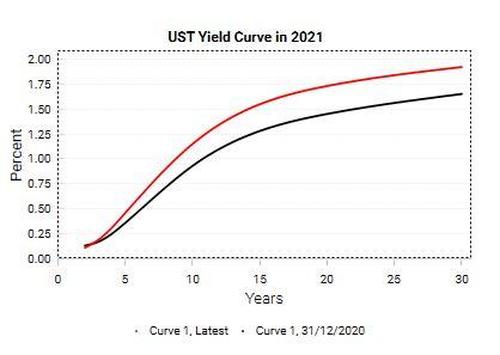 The risk for this year is for yields to continue rising and the curve to continue steepening, which raises the likelihood that in the coming months the Fed begins to discuss the possibility of increasing the weighted-average maturity (WAM) of QE purchases, or resurrect the possibility of yield curve control (YCC).

Treasuries are not as overbought as they were last year, but they are still above “fair value”, and an overshoot to being oversold is conceivable. 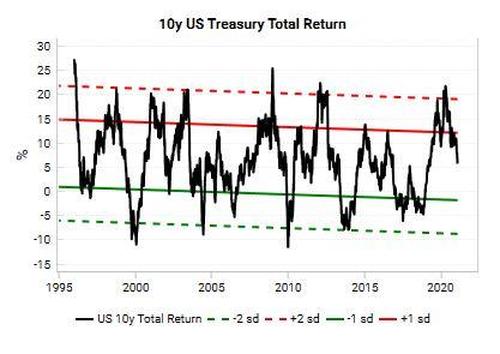 The rise in yields since October has been driven by term premium (the residual of nominal yields and long-term Fed rate expectations), given rate expectations are pinned for several years due to Fed forward guidance. 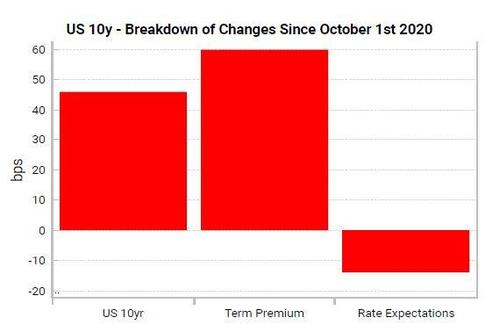 Term premium has been driven ever lower and into negative territory in the years after the GFC. Yet now with rising inflation risks – both cyclical and structural – term premium has been rising to compensate bond holders for this extra risk, with term premium now close to being positive again for the first time since 2018.

There has been a regime shift in market behavior, starting in September. Until then, ever easier global monetary policy – as captured by the rise in negative-yielding debt outstanding – coincided with falling term premium. 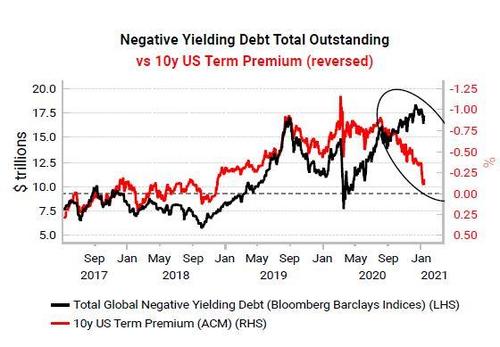 Since September, however, term premium has kept rising despite the amount of negative yielding debt outstanding remaining stable. Bond holders are sensing rising inflation risks, with term premium increasing to compensate them.

The rise in yields driven by term premium has attendant risks for equity markets that have become dependent on ever falling term premium and yields. 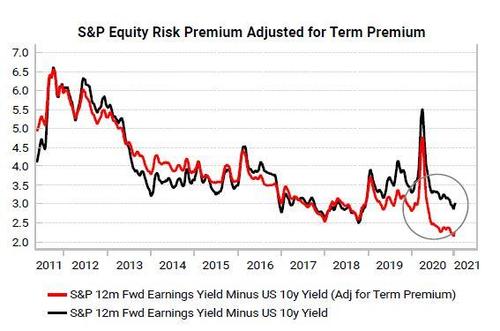 Furthermore, in the post-GFC world, equities have become vulnerable to progressively lower levels of yields and the curve.

The chart below shows that most local peaks in the yield curve have happened just before or around local tops in the S&P. The 2s10s yield curve only had to hit 135bps in late 2017 to precipitate the 11% correction in early 2018. 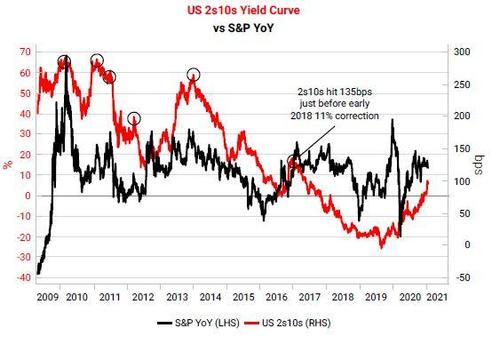 If yields keep rising and the yield curve keeps steepening, then the Fed will likely emphasize the possibility of an extension to WAM or, if that fails to have a sufficient impact, resurrect talk of yield curve control.

Last year the Fed discussed the possibility of yield curve control at several FOMC meetings. In June it was discussed, with Jay Powell commenting after the meeting, “whether [yield curve control] would usefully complement our main tools remains an open question.”

But the Fed has few options to hand if it wants to stem a rise in longer-term yields driven by rising inflation risks, which may unseat the equity market and feed negatively into the real economy. Rates are at zero, and forward guidance is already very strong.

Direct action on longer-term yields is more likely if yields keep rising. An increase to WAM is likely to be what the Fed tries first. If this is ineffective then yield curve control is firmly back on the agenda.