The Fed is repeating mistakes it made in the dotcom and housing bubble decades. A series of housing-related charts will explain. 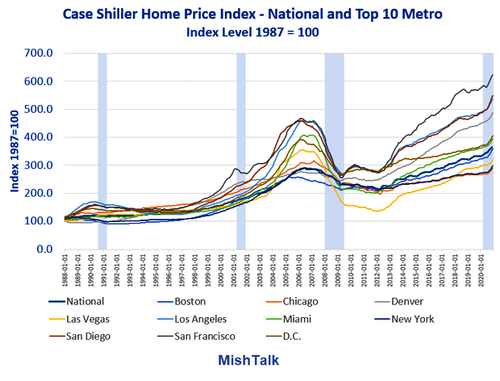 The Case-Shiller Home Price indexes (a measure of repeat sales of the same house) show that home prices are more extended now than ever before.

Those price levels are from December 2020.

On February 10, Jerome Powell gave a speech on Getting Back to a Strong Labor Market

In his speech, Powell said the Fed “will likely aim to achieve inflation moderately above 2 percent for some time in the service of keeping inflation expectations well anchored at our 2 percent longer-run goal.”

On February 24, Powell Dissed Inflation and Ignored Questions From Congress About Leverage

On March 4,  I commented Powell Confirmed Easy Money Until the Cows Come Home.

Regardless, to make up for past inflation allegedly being lower than 2% Powell repeated his pledge to let inflation run above 2%.

Is inflation lower than 2%? As measured by the CPI, it is. But the CPI is a terrible measure of inflation.

It ignores all asset bubbles, it ignores housing prices, and it seriously underweights medical expenses.

The CPI seriously underweights medical expenses by averaging in Medicare and Medicaid.

Ask anyone who buys their own medical insurance how fast rates are really rising.

With that, let’s return our spotlight to housing.

Housing Disconnects From Rent and the CPI 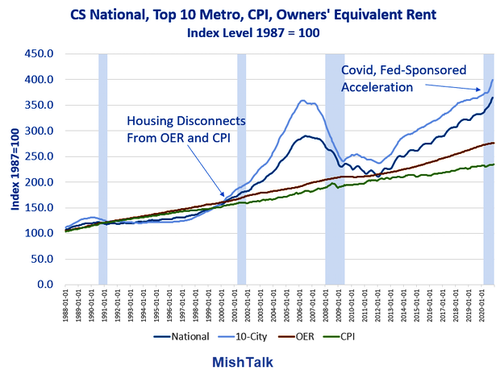 Prior to 2000, home prices, Owners’ Equivalent Rent (OER), and the Case Shiller national home price index all moved in sync.

This is important because home prices directly used to be in the CPI. Now they aren’t. Only rent is. Yet, OER is the single largest CPI component with a hefty weight of 24.05% of the entire index.

The BLS explains this away by calling homes a capital expense not a consumer expense.

However, that explanation ignores easily observed and measurable inflation. And it’s inflation, not alleged consumer inflation, that is important as the following charts show.

Percent Change From a Year Ago Comparison 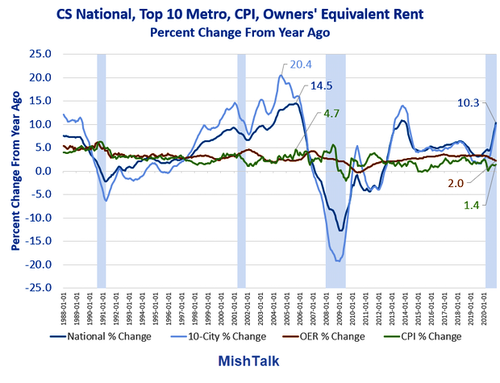 If we substitute actual home prices for OER in the CPI (as the CPI used to be calculated), the next chart shows what the CPI would look like. 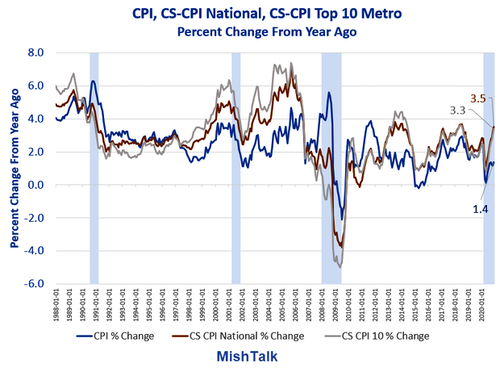 However, the CS-CPI has been running between 2% and 3% for the past three years and most of the past seven years. By this measure, the Fed has already achieved its goal.

Yet, the Fed is holding rates near zero and has pledged to remain that way.

We can calculate “Real Interest Rates” by subtracting measures of inflation from the Fed Funds Rate. 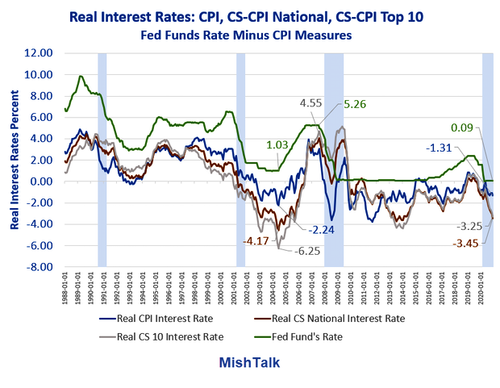 With the real interest rate at -3.45% is it any wonder speculation in stocks, junk bonds, and housing are rampant?

This is the same mistake the Fed made between 2002 and 2007 when it ignored a blooming housing bubble with dire consequences culminating in the Great Recession.

Note that a BIS Study finds that routine consumer price deflation is not damaging in the least.

Worst of all, in their attempts to fight routine consumer price deflation, central bankers, led by the Fed, create very destructive asset bubbles that eventually collapse, setting off what they should fear – asset bubble deflations.

Biden Obliterates Women’s Sports, Reinstates Rule Allowing Transgender Students to Use Bathrooms According to Gender Identity on Day One of His Presidency