Fed’s “Most Important Rate” Falls For First Time Since February

We previously pointed out that the ongoing flood of reserves and liquidity into the financial system, as the Treasury draws down its cash balance at the Fed to fund the latest Biden stimulus sending cash in the TGA account to just $1 trillion from $1.6 trillion a month ago… 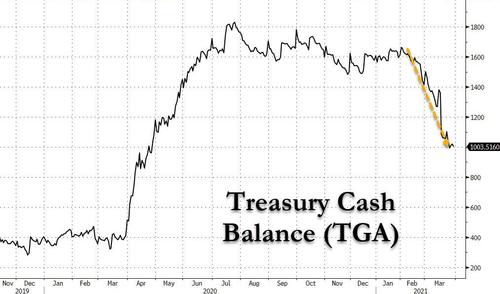 … had hammered overnight and short-term rates, with G/C repo flipping between positive and negative for the past two weeks as the record reserve glut pushes short-term rates to zero and in some cases lower (of note, overnight G/C repo traded first traded at 0.02%, according to ICAP with a bid-ask spread 0.05%/0.03% in early morning trading). 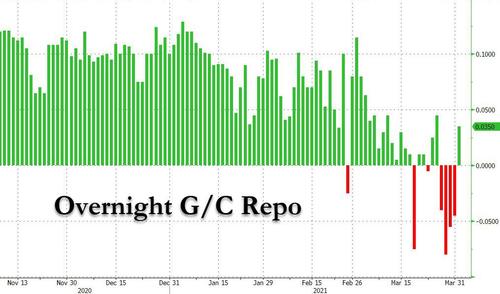 One place where this pressure on short-term funding had been absent, was in what Bloomberg calls the Fed’s “most important rate”, the Effective Fed Funds rate. That changed today, when after more than a month at 0.07%, the Fed Funds rate dipped to 0.06%… 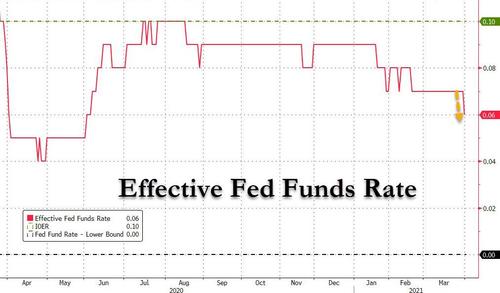 … the result of not only continued pressure on the short-end, but also due to quarter-end window dressing…

… which saw a jump in Fed Reverse Repo facility usage to $134.3BN. That said, usage of the Fed’s overnight reverse repo facility will tumble on Thursday as is customary once quarter-end window dressing is unwound.

As ICAP further notes, market participants had been waiting for a drop in fed funds because “it could signal that the central bank would have to adjust its interest on excess reserves or RRP rates to maintain control of short-term rates.”

Meanwhile, Treasury bills maturing the next three months are yielding between -0.013% and 0.015%.1

Google Trends Reveals The Catastrophe On The Ground In Texas

Is China About To Devalue The Yuan: Local Banks Start Dumping Yuan