Fiscal stimulus, including the latest $1.9 trillion American Rescue Plan Act, is a terrible joke.  And the means for financing it is a terrible fraud.  A massive deficit, piled upon a mammoth debt, made possible by dollar debasement.

Extreme credit market intervention by the Federal Reserve is a prerequisite.  So, too, is the utter denial of price inflation by the Bureau of Labor Statistics.  This week’s consumer price index (CPI) propaganda reported the all items index increased 0.4 percent in February and 1.7 percent over the last 12 months.

The combination of extreme credit market intervention and bogus inflation reporting is making a mockery of credit markets.  Where to begin?

When you purchase a Treasury note you are lending money to the government for a specified period of time (i.e. 30 days to 30 years) at a fixed rate of interest or yield.  The risk of default on Treasuries has generally been considered nonexistent.

The federal government, with assistance from the Federal Reserve, can always print money to pay its debts.  But this isn’t without risks.  Because printing dollars to pay debts devalues the existing stock of dollar.  So while the nominal return is preserved…the inflation adjusted return goes negative.

In short, inflation destroys Treasury values for investors.  To account for expectations of rising inflation, yields rise.  But this presents another problem for long term Treasury investors.

When Treasury yields go up, Treasury prices go down.  Over the last eight months, the yield on the 10-Year Treasury note has increased from 0.5 percent to over 1.54 percent – or 104 basis points.

When interest rates rise, explosives things happen.  There are financial blow ups.  Long Term Capital Management, for example, in 1998.  Or Lehman Brothers in 2008.  Sometimes the stock market crashes…like the Black Monday crash of 1987.

There are many well-known examples.  However, here we revisit a lesser known blow up.  One we believe is particularly instructive.

Given the burden pension fund managers have to overcome significant cash shortfalls, similar iterations of the story that follows may soon play out in various hamlets across America…including a city or town near you.

Robert Citron loved his job.  His wife Terry once remarked:

“He can barely stand the weekend at home.  He can’t wait to get back.  I think he’d go crazy without that job.”

Perhaps Citron should have taken up a hobby.  Soap making or yo-yoing or even taxidermy.  Anything to distract from trying to outdo himself.  The people he served would have been much better off.

Robert Citron, if you’ve never heard of him, accomplished a remarkable achievement.  In 1994, the 69-year old treasurer for Orange County, a position he’d held for 25 years, oversaw a $1.64 billion dollar loss of public funds.  At the time this resulted in the largest municipal bankruptcy in U.S. history.

The fuse for Citron’s ticking time bomb was Alan Greenspan’s increases to the federal funds rate.  This was in the rough and tumble days before the Fed telegraphed its rate hikes two years in advance with dot plots and other nonsense.

Citron always just knew what was going to happen.  He always had.  His acumen had made him an investing bigshot.  He consistently beat nearby investment pools by at least 2 percent.  Thus, a steady flow of cash came his way.

Dazzled by Citron’s results, schools, cities, and districts tripped over themselves in their rush to invest with him.  Few looked into how he produced these miraculous returns.

Citron’s strategy was centered on a core belief.  That interest rates would remain low and that the difference between short-term yield and long-term yield offered an opportunity for arbitrage.  Citron used structured notes to exploit this.  Then he leveraged the entire portfolio to further amplify the gains.

Through a series of reverse repurchase agreements, Citron used his securities as collateral for loans to buy even more securities.  He levered a sizable $7 billion portfolio into a $20 billion position.

At the moment, Fed Chairman Jay Powell says he wants inflation to run hot.  That the Fed will hold the federal funds rate near zero until at least 2023.

But what if the credit market has other thoughts?

The yield on the 10-Year Treasury note has increased 104 basis points over the last 8 months.  But for every market trend there is a countertrend.  Over the next month or two there could be a countertrend in bonds and interest rates could fall.

However, the great monetary inflation has already happened.  The great price inflation is picking up, regardless of what the Bureau of Labor Statics’ bogus CPI report says.  Thus, it is certainly possible that the yield on the 10-Year Treasury note could increase another 50-basis points come summer.

And by our estimation, we’re about 50-basis points to disaster.

The financial system, lured by a seemingly endless supply of cheap credit from the Fed is levered up to its eyeballs.  Just wait and see.  When the yield on the 10-Year Treasury note eclipses 2.10 percent something will blow.

There could be corporate debt, hedge fund, and pension fund financial blow ups galore.  But this is exactly what the Fed is trying to avoid.  The Fed wants inflation without higher interest rates.

Yet these Fed asset purchases will likely balloon to keep interest rates in check.  So in addition to a debt crisis, the Fed is propagating a dollar crisis. 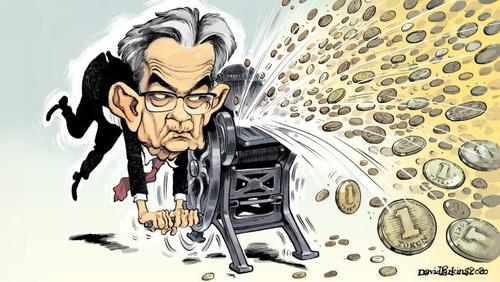 In Orange County’s 1994 experience, the grand jury investigation found that Citron, “relied upon a mail-order astrologer and psychic for interest rate predictions.”

Nowadays, we have the Fed’s dots.  And like astrology or psychic predictions, dot plots have nothing to do with the realities of inflation or a free functioning credit market.

The reality is we’re 50-basis points to disaster.  The Fed can resist it with ever greater amounts of printing press money.  And certainly the Fed will.  It’s the only way for the government to stay in business.

But it doesn’t take much imagination to see where this leads.  And if you still don’t own some gold and silver you probably never will.