The whole world looks like it’s catching up with Tesla and Elon Musk. Not only does a new EV company pop up every day, but the ones who have been chugging along for a couple years now are starting to hit adoption milestones quickly.

For example, EV maker Fisker announced this week it had passed over 13,000 reservations for its Ocean EV.

“Passing 13,000 fast! Had to get this update out!” CEO Henrik Fisker Tweeted on Monday. “Thanks to all our reservation holders, I really appreciate you are willing to get in early and support us & the EV revolution.”

Passing 13,000 fast! Had to get this update out! Amazing. Thanks to all our reservation holders, I really appreciate you are willing to get in early and support us & the EV revolution. Henrik #Fisker #Love #EVs #change #ESG #climate pic.twitter.com/nXMnw7Sieq

Recall, in February, Fisker entered into a memorandum of understanding with Foxconn Technology Group, the world’s biggest electronics manufacturer, to build electric vehicles as soon as the fourth quarter of 2023. Fisker is getting another shot at making electric vehicles after declaring bankruptcy in 2013.

I’m super excited about our collaboration with Foxconn! This vehicle is so revolutionary that we HAVE to keep is secret until the launch in end of 2023! It might be too futuristic for some! We will see! #Fisker #love #EVs #ESG #ClimateAction pic.twitter.com/gCA6spf1hm

Taiwan’s Foxconn is expected to build more than 250,000 vehicles per year. The electric cars are expected to be distributed to North America, Europe, China, and India markets.

“Projected start of production is Q4 2023; this will be the second vehicle introduced by the Fisker brand, following the launch of the Ocean SUV in Q4 2022,” the company press release said. 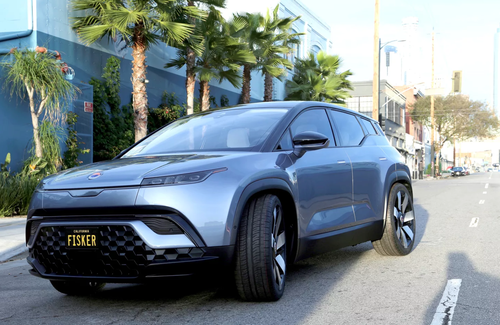 “We created our company to disrupt every convention in the auto industry,” Fisker Chairman and Chief Executive Officer, Henrik Fisker said in a statement.

“The creation of Project PEAR with Foxconn brings together two likeminded and complementary companies, each focused on creating new value in a traditional industry. We will create a vehicle that crosses social borders, while offering a combination of advanced technology, desirable design, innovation and value for money, whilst delivering on our commitment to create the world’s most sustainable vehicles,” Fisker continued.

“The Fisker and Foxconn partnership brings together two global leaders in innovation that will join forces to unlock the potential of the electric vehicle industry,” said Foxconn Technology Group Chairman, Young-way Liu.”

“Not unlike when Isaac Newton realized the powers of gravity, the inspiration for this project has come from some unconventional sources,” added Fisker. “The design sketch hints at the direction we are taking. However, with the level of innovation planned for this vehicle, I intend to keep the final design a surprise until the last possible moment!”

While automakers, big and small, are increasingly releasing new models – that crowding-out effect may not be a good fit for Tesla, whose equity valuations are sky-high. As of March 2, and even after a pullback over the last 2 weeks, Tesla’s PE ratio remains at a mind-numbing 1,122.

More or less, the flood of electric cars entering the market in the next couple of years may not be the best news for Tesla – unless Elon Musk continues to buy Bitcoin.