Is it time to worry about food inflation?

The Food and Agriculture Organization’s Food Price Index rose for a ninth consecutive month in February, hitting levels not seen since July 2014, led by sugar and vegetable oils.

The FAO Food Price Index (FFPI) measures the monthly change in international prices of a basket of food commodities, such as cereals, oilseeds, dairy products, meat, and sugar. FFPI average 116 for the month, versus 113.2 in January. 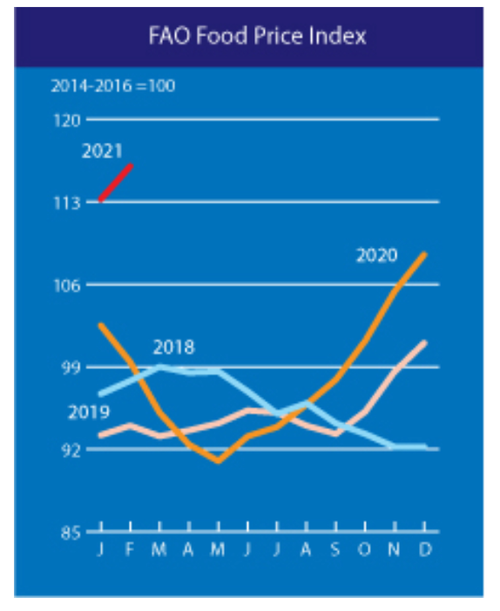 FFPI has been on an upwards trajectory for the ninth consecutive month. This unwelcoming food inflation around the world has caught the attention of everyone’s favorite permabear, SocGen’s Albert Edwards, who, unlike Goldman, has already sounded the alarm because this may result in social-instabilities in certain parts of the world.

Soaring food prices are quickly outpacing incomes, especially in emerging markets far less insulated from skyrocketing raw commodity prices than developed countries. An unprecedented amount of fiscal and monetary policy by governments and respective central banks has flooded the world with liquidity. Edwards makes the point that central banks’ expansive monetary policies, more importantly, the Federal Reserve, has been blamed for the global tidal wave in food inflation back in 2011 and is likely the culprit today. We must also add that supply chain disruptions from the virus pandemic is another factor in higher commodity prices. 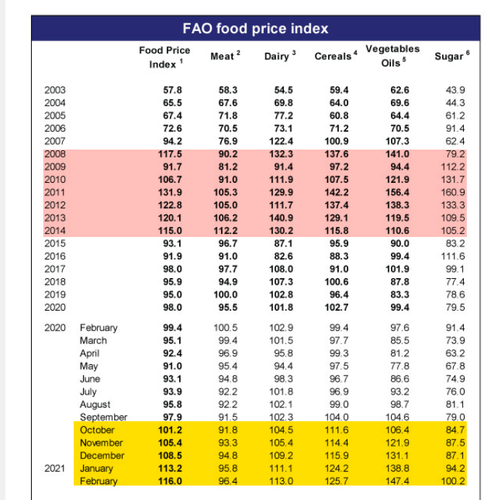 So breaking down the FFPI, the cereal price index rose 1.2% month on month in February. Among other grains, sorghum prices jumped the most, rising 17.4% on the month and 82.1% over the same period last year, driven by China’s strong demand.

The vegetable oil price index rose 6.2% to levels not seen since April 2012, with palm oil prices rising for the ninth straight month.

Dairy prices increased 1.7%, while the meat index rose a modest .6%. FAO said pig prices slumped due to reduced purchases from China amid oversupply conditions in Germany due to an export ban to top Asian markets. 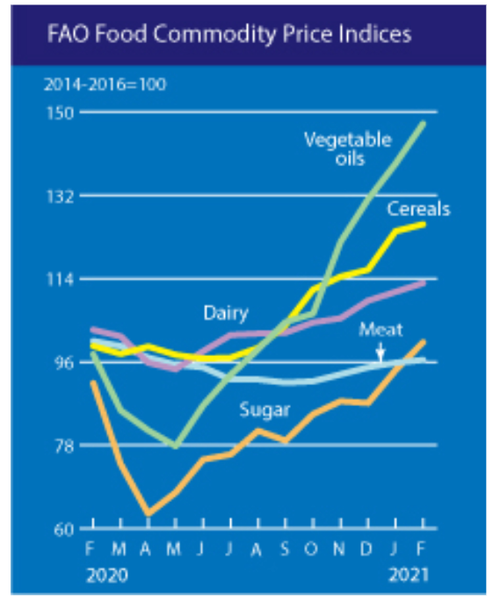 Food inflation globally has been remarkably low in recent years, but the latest surge has been an excellent predictor of bond yields.

“The intriguing thing about food inflation is that it seems to match up much more closely with US bond yields than any other commodity, particularly gold and oil, two commodities usually associated with inflation, “wrote Russell Clark, CIO and founder of Russell Clark Investment Management (formerly Horseman Global).