Over a month ago we first exposed the “Green Scam”. ESG, or Environmental, Social, and Governance, has become the virtue-signaling tour de force for asset mangers to skim even greater margins off retail dupes under pressure from their liberal peers. And since the green movement was here to stay, so was the wave of pro-ESG investing which every single bank has been pitching to its clients because, well you know, it’s the socially, environmentally and financially responsible thing.

There is just one problem. Instead of finding companies that, well, care for the environment, for society or are for a progressive governance movement, it turns out that the most popular holdings of all those virtue signaling ESG funds are companies such as…. Microsoft, Alphabet, Apple and Amazon, which one would be hard pressed to explain how their actions do anything that is of benefit for the environment, or whatever the S and G stand for. It gets better: among the other most popular ESG companies are consulting company Accenture (?), Procter & Gamble (??), and… drumroll, JPMorgan (!!?!!!?!).

Yes, for all those who are speechless by the fact that the latest virtue-signaling investing farce is nothing more than the pure cristalized hypocrisy of Wall Street and America’s most valuable corporations, who have all risen above the $1 trillion market cap bogey because they found a brilliant hook with which to attract the world’s most gullible, bleeding-heart liberals and frankly everybody else into believing they are fixing the world by investing in “ESG” when instead they are just making Jeff Bezos and Jamie Dimon richer beyond their wildest dreams, here is Credit Suisse’s summary of the 108 most popular ESG funds. Please try hard not to laugh when reading what “socially responsible, environmentally safe, aggressively progressive” companies that one buys when one investing into the “Green”, aka ESG scam. 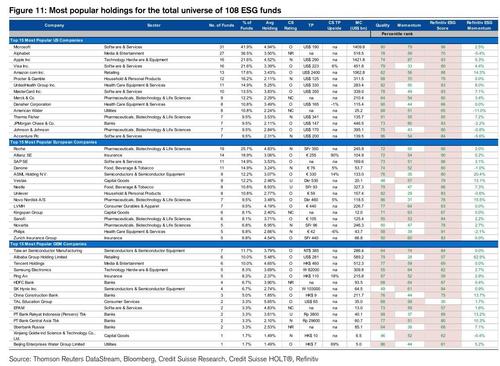 And today we get confirmation from ex-insider. Tariq Fancy, former chief investment officer for Sustainable Investing at BlackRock, wrote an op-ed in USAToday admitting that Wall Street is greenwashing the financial world, making sustainable investing merely PR, which is a distraction from the problem of climate change. 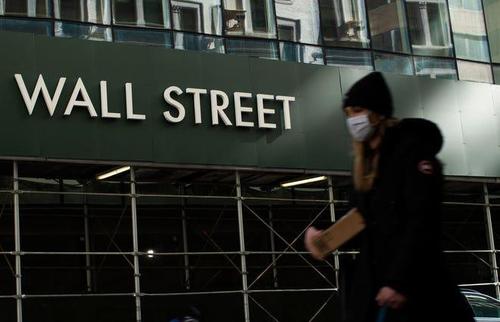 The financial services industry is duping the American public with its pro-environment, sustainable investing practices. This multitrillion dollar arena of socially conscious investing is being presented as something it’s not. In essence, Wall Street is greenwashing the economic system and, in the process, creating a deadly distraction. I should know; I was at the heart of it.

As the former chief investment officer of Sustainable Investing at BlackRock, the largest asset manager in the world with $8.7 trillion in assets, I led the charge to incorporate environmental, social and governance (ESG) into our global investments. In fact, our messaging helped mainstream the concept that pursuing social good was also good for the bottom line. Sadly, that’s all it is, a hopeful idea. In truth, sustainable investing boils down to little more than marketing hype, PR spin and disingenuous promises from the investment community.

In many instances across the industry, existing mutual funds are cynically rebranded as “green” — with no discernible change to the fund itself or its underlying strategies — simply for the sake of appearances and marketing purposes. In other cases, ESG products contain irresponsible companies such as petroleum majors and other large polluters like “fast fashion” manufacturing to boost the fund’s performance. There are even portfolio managers who actively mine ESG data to bet against environmentally responsible companies in the name of profit, a short-selling strategy. Risk managers are focused on protecting their investment portfolios from potential damages done by a worsening climate rather than helping prevent that damage from occurring in the first place.

As disheartening as this reality is, claiming to be environmentally responsible is profitable. Last year alone, ESG mutual funds and exchange-traded funds nearly doubled. The investment community understandably reacted to this with cheers. But those cheers were only for fund managers and their bottom lines. No matter what they tout as green investing, portfolio managers are legally bound (as well as financially incentivized) to do nothing that compromises profits. To advance real change in the environment simply doesn’t yield the same return.

In early March, my sentiments were echoed by the U.S. Securities and Exchange Commission (SEC), which announced it was creating a Climate and ESG Task Force to “proactively identify ESG-related misconduct” such as inaccurate or incomplete disclosures by funds and companies — an unprecedented move that suggests there might be abuses that have gone unaddressed.

Ironically, the COVID-19 pandemic has forced us to learn some painful lessons. The initial response of rosy forecasts, loose half-measures and group denial boosted morale, but it also lulled the public into a false sense of security that prolonged and worsened the crisis.

We need to fix the system before disaster strikes

While how we fight a pandemic and climate change are very different, one aspect is clear. Both threats can only be won through the combined efforts of science and policy. In response to the pandemic, we’ve learned that only top-down government action, such as forcing the closure of high-risk venues and mandating masks indoors, makes a real difference. A “free market” will not correct itself or fix the problem by its own accord.

Imagine the planet is a cancer patient, and climate change is the cancer. Wall Street is prescribing wheatgrass: A well-marketed, profitable idea that has no chance of curing or even slowing down the cancer. In this scenario, wheatgrass is the deadly distraction, misleading the public and delaying lifesaving measures like chemotherapy. But like giving false hope to unproven cures in the midst of a pandemic, the consequences of such irresponsibility are all too obvious. And motivation for why the industry continues to greenwash is all too obvious.

When I left the industry in late 2019, due to family business obligations following the passing of my father-in-law, I was frustrated by the lack of any real change. But I took some comfort in believing that if we weren’t doing as much as we could, at least we weren’t doing any harm. Since my departure, I have had a lot of time to think about this issue, and I’ve reassessed my opinion. I believe we are doing irreversible harm by stalling and greenwashing. And all in the name of profits.

We’re running out of time and need to accept the truth: To fix our system and curb a growing disaster, we need government to fix the rules.

Fancy appeared later in the day on CNBC and stunned the always-ready-to-virtue-signal anchor by telling her that that “the financial services industry is duping the American public with pro-environment, sustainable investing practices.”

He added that there is no evidence ESG investing has any social impact.

“Vega Vacuum”: Why The High VIX Has Been So “Persisently Sticky” And What Happens Next

Who Is The Sucker In The SPAC Market?