By now, most of America probably remembers the Flint, Mich. water crisis as one of the biggest scandals of the Obama era. But nearly seven years after the impoverished city’s drinking water was found to be contaminated, former GOP Gov. Rick Snyder (who was widely vilified in the press over his involvement in the decisions that led to the contamination) is reportedly about to face criminal charges.

The AP reports that Snyder, his health director Nick Lyon and other ex-officials from his administration have been told they’re being charged after a new investigation of the Flint water scandal. The city’s water, which was mistakenly contaminated with lead due to an oversight by the state, caused an outbreak of Legionnaires’ disease in 2014-2015 and untold led poisoning. 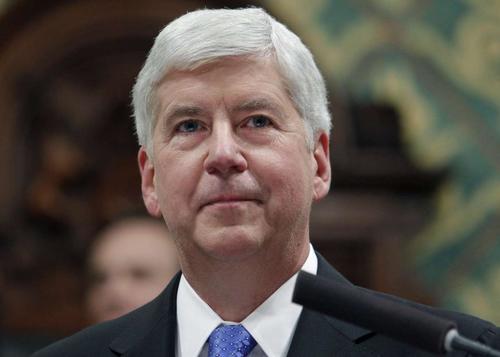 Snyder has been out of office for two years, but he was governor when state-appointed managers in Flint switched the city’s water source to the Flint River in 2014 as a cost-saving measure while a new pipeline was being built to Lake Huron. The water, however, was not treated to reduce corrosion, which turned out to be a disastrous decision, as lead leached from old pipes and found its way into the water drank by 100K residents. Meanwhile, bacteria in the water was blamed for legionnaires.

Progressive media latched on to the scandal and transformed Flint into a symbol of governmental mismanagement, as well as an example of how poorer communities of color are treated compared with wealthier, mostly white communities.

Snyder and Lyon announced the Legionnaires’ outbreak and the contamination issue in January 2016, although Lyon conceded that he knew that cases were being reported many months earlier. In 2018, Lyon was preparing to stand trial on involuntary manslaughter charges after a special prosecutor accused him of failing to timely inform the public about the outbreak in a timely manner. His attorneys argued there was not enough solid information to share earlier. But by June 2019, the prosecution had been thrown out as a new attorney general, Dana Nessel, and a new team of prosecutors said they would start the investigation anew.

The looming charges are apparently the result of this second investigation.

WHAT A DISGRACE: Pence Disagreed with Louie Gohmert on Electoral College Vote Before Lawsuit