“When we talk about sightings, we are talking about objects that have seen by Navy or Air Force pilots, or have been picked up by satellite imagery that frankly engage in actions that are difficult to explain,” Ratcliffe told Bartiromo.

“Movements that are hard to replicate that we don’t have the technology for. Or traveling at speeds that exceed the sound barrier without a sonic boom,” he said. 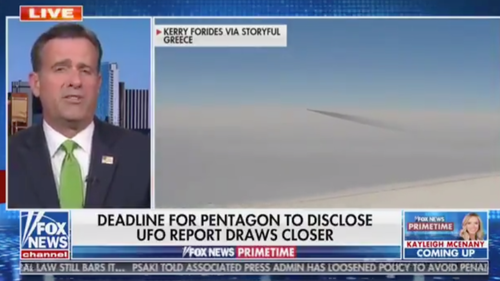 In December, President Trump’s COVID-19 relief and government funding bill began a 180-day countdown for the Pentagon and spy agencies to release what they knoq about UFOs. The complete report is expected to be published on June 1.

Ratcliffe told the Fox News host that Americans would be surprised by the number of UFO sightings over the years.

“When we talk about sightings, the other thing I will tell you is, it’s not just a pilot or just a satellite, or some intelligence collection,” he explained. “Usually, we have multiple sensors that are picking up these things, and some of these are unexplained phenomenon, and there is actually quite a few more than have been made public.”

One of the latest sightings came from an American Airlines plane was en route to Phoenix, Arizona, from Cincinnati, Ohio. The pilots observed a missile-like object zooming above the commercial jet in the skies over Arizona last month.

Investigative reporter Sara Carter spoke with Luis Elizondo, the Advanced Aerospace Threat Identification Program former director. This secretive Pentagon unit studied UFOs. He said Ratcliff’s interview with Bartiromo “further illustrates the reality of what other senior members of our Executive and Legislative Branches are already aware of, in that the UAP/UFO issue is real, relevant, and a national security interest.”

Wow. Maria Bartiromo gets former DNI John Ratcliffe to talk about UFOs ahead a deadline for the government to disclose what it knows about them…

“Usually we have multiple sensors that are picking up these things…there is actually quite a few more than have been made public” pic.twitter.com/qu4VlzrZw1

… and who knows why the federal government is in such a rush to release a UFO report during a pandemic and economy on fiscal and monetary life support. Could it be a big distraction for the public, as we first noted weeks ago?

From Press Freedom to Prison Systems, Everything Assange Touches Gets Illuminated

Why Would Anyone Live in California?