In light of Sleepy Joe’s swell new $1.9 trillion package of more free stuff, it’s time to get out our magnifying glasses again. The purpose is to compute the size of the hole in America’s collective paycheck that purportedly requires such continued, extraordinary beneficence from our not so rich Uncle Sam.

To repeat: There is no reason in the world why the February (pre-Covid) level of wage and salary disbursements is not a solid and appropriate benchmark for measuring the pocketbook hit from the Covid-Lockdowns that have wreaked havoc on the US economy since March. That is, from the point at which the evil Dr. Fauci convinced the Donald to pull the plug on MAGA and his own tenure in office, too (of course, 80-year-old Dr. Fauci is still there, fixing to bamboozle yet another notionally “elected” president).

Still, back in February the Donald was boasting to one and all that he had delivered the greatest economy the world had ever seen and Wall Street apparently agreed, pushing stocks high into the nosebleed section of history.

As it happened, the February run rate (annualized) of wage and salary disbursements was $9.659 trillion, which computes to about $805 billion per month. So we would suggest that if $805 billion of monthly wages was enough to justify celebration of the Greatest Economy Ever, then the shortfall from that benchmark is a solid measure of the hit to US worker earnings that has occurred since February.

Based on the red bars in the chart below and translated to actual monthly numbers, the Covid-wage and salary loss computes as follows:

The total of $276 billion of lost paychecks compares to $8.05 trillion of wages and salaries which would have been earned during that period at the February rate ($805 billion). So the cumulative shortfall through year-end amounted to just 3.4%.

More importantly, the $0-$6 billion monthly shortfall since September has been so small as to constitute a rounding error in the scheme of things, as suggested by the fact that American households spend far more – about $8 billion per month – on pet food and pet care alone.

Yet Sleepy Joe has now teed up another $850 billion of direct aid to households, which in the aggregate are no longer suffering any material paycheck shortfall. And what is especially egregious about filling a nonexistent income hole in this manner is that 53% of this amount goes to “stimmy” checks and child tax credits, which are essentially not even mean-tested except at the tippy-top of the income scale ($200,000 for a married couple):

Still, to paraphrase Walter Mondale’s famous campaign slogan from 1984: Another $850 billion for income replacement but “Where’s The Hole?”

Compensation of All US employees, Annualized Run Rate, February 2020-November 2020 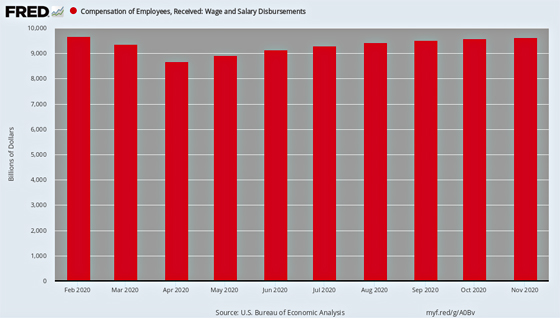 Of course, there are other ways to measure the hit to the national economy stemming from the Covid-Lockdown impact, as we will amplify below. But first it would be well to summarize the “solution” that Washington’s fiscally incontinent politicians have heaved at the “problem” during the last 11 months – a “problem” that they have never bothered to quantify.

With the new Biden package, spending authorized by the five major Covid relief measures can be summarized as follows (billions):

That’s right. The Washington pols are fixing to heave nigh onto $6 trillion at a $274 billion hole in the nation’s wage bucket. That’s a solution 22X bigger than the putative problem!

Of course, we do not mean to dwell lightly on the “putative” part, nor embrace the notion that government owes citizens reparations for the damage its actions have caused.

Yes, the overwhelming share of the actual economic harm since March is due to the misguided (and unconstitutional) lockdown policies of the government and the vastly disproportionate and unwarranted public hysteria fanned by Dr. Fauci and the Virus Patrol, not the disease itself. But if the state gets into the business of fully indemnifying the public for the endless harm wrought by its policies, insolvency would be thereafter guaranteed, and in short order, too.

Besides, why does Washington have the right to burden future taxpayers with permanent debt service payments in order to make-whole a $276 billion loss of income and 3.4% inconvenience among taxpayers today?

And don’t stiff us with the humanitarian relief bit. The simple fact is that the overwhelming share of this $276 billion of wage losses has been visited upon low-wage and part-time workers in the social-congregation sectors of the economy (bars, restaurants, gyms, hotels, movies, ball parks etc.) that the Virus Patrol in its wisdom has shutdown. The right solution is send the Virus Patrol packing and let these unfairly penalized employees go back to work.

Moreover, even if you want to plug that “hole” beyond what the in-place safety net is already providing (see below), well, then, tax the more affluent section of today’s citizenry to pay for it, not unknowing, unborn and voiceless future taxpayers.

Then again, the bipartisan duopoly is not about to give that fiscally honest approach the time of day; they specialize in the joint gang-mugging of voiceless future taxpayers.

Even if you think that the total wage and salary loss computed above understates the economic damage caused by the lockdowns, the massive fiscal overkill owing to the Everything Bailouts cannot be gainsaid.

For instance, GDP is the most comprehensive measure of economic activity that we have (despite its manifest flaws), but the loss of GDP after February has also been only about 3.6%. In fact, based on the Atlanta Fed’s GDPNow forecast, we project that nominal GDP during Q4 will post at about $21.650 trillion, a figure only 0.46% below the Greatest Economy Ever level of Q4 2019.

So, again, if we assume that Q4 2019 is a reasonable pre-Covid benchmark for the level of total economic activity in the USA, we get the following shortfall, including an estimate for Q4 based on the Atlanta Fed’s latest outlook.

So even if you want to count everything including losses from the $2.5 trillion of imputed activity in the GDP, the pending $6 trillion of Everything Bailouts is 7.7X the size of the problem! 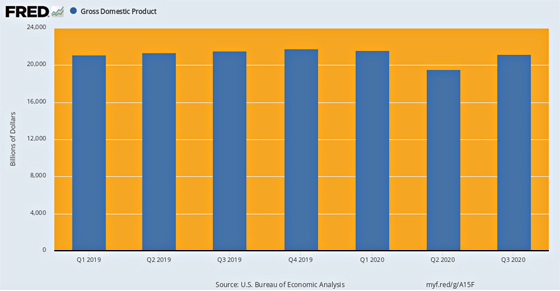 Of course, the real point of the bailouts is to compensate the private sector for the economic harm done by the government in its exertions in furtherance of the public health. But when you look at the impact of the Covid-Lockdowns on value-added of the non-financial business sector, the hit compared to pre-Covid levels is also quite small.

Again, using Q4 2019 as the pre-Covid benchmark and actual results through Q3 2020 and the Atlanta Fed estimates for Q4, the loss in business output relative to Q4 2019 is just $594 billion or 2.7% of total GDP. So by this measure of the “problem”, the impending Everything Bailouts would amount to 10X the size of the hole in the bucket.

Likewise, our Atlanta Fed-based estimate of Q4 nonfinancial business value added of $10.251 stands at fully 99.1% of the Q1 2019 level. That’s hardly a setback that warrants burying future taxpayers in $6 trillion of new debt, and most especially not the $1.9 trillion part recommended by our day-late-and-dollar short incoming POTUS, who has just emerged from his Delaware bunker. 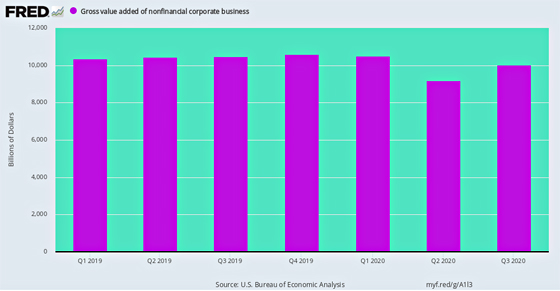 By contrast, it is well worth looking at the other side of the coin: Namely, the surge in transfer payments since last February stemming from a combination of the built-in safety net (principally unemployment insurance, foods stamps and Medicaid) and disbursements of stimmy checks, enhanced Federal UI benefits and the rest authorized by the Everything Bailouts.

At the pre-Covid level in February, total government transfer payments (including state and local) were running at a $3.165 trillion annual rate or about $265 billion per month. As shown in the chart below, however, that monthly figure skyrocketed by 107% to $546 billion in the month of April alone.

And, no, that latter figures is not the annualized rate: In their infinite generosity, government programs pumped more than one-half trillion dollars into the household sector during April alone. That’s $18.2 billion per day!

Thereafter, the tsunami of transfer payments began to abate, but were still running at a $400 billion monthly level in July and $306 billion level in November. Overall, the 10-month total of incremental transfer payments above the February level totaled $1.05 trillion.

You can’t make this up. Transfer payments to households during the past 10 months have exceeded the loss of household wages and salaries ($276 billion) by nearly four times.

So the question recurs: Why does Sleepy Joe think we need another $850 billion of transfer payments to households on top of the immense generosity already dispensed per the chart below?

The answer is simple: He’s doing it because he can – because the nation-wreckers in the Eccles Building have determined to purchase $120 billion of government debt and GSE securities per month for the indefinite future. As JayPo rattled on at his presser this week, they are not even thinking about thinking about tapering this tsunami of fake money plucked from thin air by the Fed’s digital printing presses.

Accordingly, under this crooked regime of massive debt monetization, there is no here and now economic sting to rampant Federal borrowing; no “crowding-out” as in times of yore before the Fed went off the deep-end with Keynesian money-pumping; and no surging interest rates to rouse Wall Street and the business community from their happy slumber in the lap of ultra-cheap borrowing costs.

Stated differently, when it comes to the rampant fiscal incontinence in the Imperial City enabled by the Fed, did the election outcome make any difference?

It did not. Sleepy Joe is about to give the once and former King of Debt a run for his money when it comes to the annals of fiscal infamy in America. 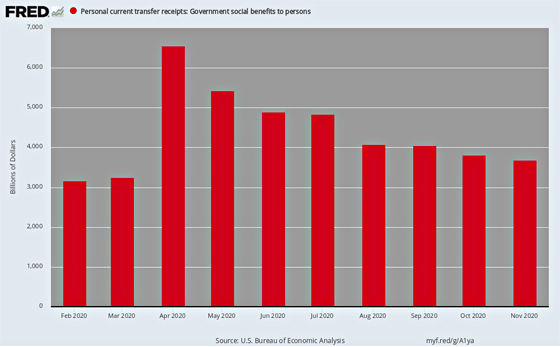 Even if you set-aside things like increased Medicaid and food stamp spending embedded in the above figures for total government transfer payments and focus just on the change in Federal-state unemployment insurance disbursements since February, the sheer fiscal madness at loose on Capitol Hill is baldly evident.

To wit, prior to the Covid-Lockdown battering of the US economy, which has so far caused the filing of an incredible 70 million in new unemployment benefit claims, the Federal-state unemployment systems was pumping out benefit payments at a $27.8 billion annual rate in February or about $2.3 billion per month.

Here is the subsequent increase in UI payments from both existing state programs and the Federal pandemic assistance benefits and $600 per month topper payments. They total $518 billion or nearly two-times the $276 billion cumulative loss of wages and salaries during the same 10-month period.

Moreover, the alacrity with which the system poured money into the ranks of unemployment claimants is a wonder to behold. By April the February payment level of $2.3 billion had soared to $41 billion, per month and by July the figure came in at an astounding $117 billion per month.

That’s right. At the June peak rate of $117 billion per month ($1.4 trillion annualized per the chart below), the monthly payment rate was 51X higher than it had been in February, and exceeded the full year UI payout rate during the depths of the Great Recession.

In Part 2, we will dig deeper into the bipartisan fiscal insanity now afoot in the Imperial City.

But consider this: If the Federal-State unemployment system was already overcompensating for actual lost wages and salaries by 2X, why did we need to send helicopter checks, or what Washington now fondly calls “stimmy checks”, to 155 million households on top of that, when most of these households had not lost their jobs or paychecks?

Nevertheless, here is the “stimmy check” and related non-means tested money in the five Everything Bailouts including Sleepy Joe’s new edition to the Fiscal Demolition Derby:

In short, the wage loss hole in the bucket was already filled two-times over by the increase in UI benefit payments since February, but this massive drop of cash on the American public will have filled it again by another 4.5X.

As we said, free lunches for one and all……except, except the debt is never going away and future generations will surely rue the day.

The post Free Lunches for One and All appeared first on LewRockwell.

The Idea of a Private Law Society: The Case of Karl Ludwig von Haller