Factory workers in France have labeled social distancing ‘dog collars’ as an “attack on individual liberty” as employers are trying to make them wear the devices to enforce restrictions while working. 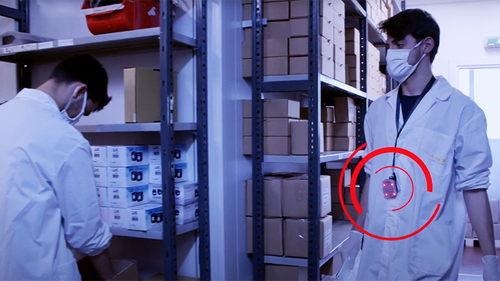 The alarm devices emit a noise and light up if workers get closer than two metres together, but have been slammed by a worker’s union for “infantilising” employees.

The alarms are scheduled to be introduced by hygiene company Essity, which wants it’s factory workers to wear them around their necks.

The CFDT union told AFP that it is “a system comparable to ones that try to dissuade dogs from barking.”

Christine Duguet, a union representative from the CFDT, suggested that the devices will “finish in the rubbish bins or stay in a cupboard,” adding “This is complete nonsense.”

Duguet also expressed concerns that the company would attempt to keep the system in place as a ‘security measure’ even after the pandemic ends.

The device is manufactured by a Belgian company called Phi Data, which also offers a similar device that can be activated by the wearer if they feel someone comes too close to them.

Imagine that hell. Karens everywhere emitting bleeping blaring alarms if you dare to walk past them on the street.

Other similar devices have been developed by tech companies and researchers seeking to cash in on the pandemic panic:

There are also scores of videos on YouTube detailing how to make DIY versions of the devices:

This is not normal. What has happened to humans?

Where does this end up? Electronic collars that administer a shock if you break distancing restrictions?

Aside from the imprisonment of everyone inside pods, this weird technology is being embraced with the social distancing justification.

Amazon is reported to have experimented with such technology in their warehouses:

As we highlighted back in October, Hitachi has developed similar technology, which includes cartoon fish swimming around inside a bubble. When a person violates social distancing, the fish escape.

Given that numerous prominent people are insisting that social distancing and other coronavirus restrictions are here to say, it’s perfectly feasible to imagine a near future in which this technology is widely adopted.

China is already linking coronavirus rules to its onerous social credit score system, in addition to using AI to discipline its slave labor workforce, so the idea that people could be publicly shamed or punished for getting too close to others is a very real possibility.

CCP has launched a new #SocialControl system called “civilization code,” that combines China’s coronavirus #HealthCode app with the “social credit system” which allows the #CCP to track and trace citizens with a tighter grip.

“Begging The Fed For Guidance”: BofA Expects The Fed To Address Markets “As Soon As This Week”