We already knew the House of Representatives at the 117th Congress is the greatest collection of political crooks, lowlifes, and losers to ever assemble under one roof.  We didn’t need a token impeachment vote to validate this.

More importantly, President-elect Biden’s proposed $1,400 “stimmy” checks (i.e. stimulus checks).  The amount is a “topping up” of the $600 “stimmy” approved by Congress in December.  Together, these total the $2,000 “stimmy” promised to voters.

Naturally, Biden’s fulfilling the dream of America’s central planners.  You know the plan by now.  Lockdown the economy, bankrupt small businesses, and then stimulate consumer demand with fake money.  As easy as one, two, three, the central planners took control of the population, the economy, and financial markets.

Over the years, there have been many bad ideas.  The federal income tax, for instance.  Or legal tender laws.  But the real measurement of a bad idea is how much popular destruction it can bring.

Communism, for example, made an utter mess of the 20th century.  Armed with all the smartest guys in the room, the Soviet Union’s state planning committee drafted up five-year plans for what it called the centralized development of the national economy.

You’d think Mao would’ve learned from the Soviet Union’s failed roll out of centralized agriculture in the 1930s.  But, alas, he was so enamored with the bad idea he included it in his Great Leap Forward some 30 year later.  Predictably, Mao was greeted with the Great Chinese Famine.

Currently in America, the central planners are hooked on progressivism.  Under its regressive influence, no idea’s too damaging to pass up.  Global warming.  Gender neutral diktats.  Reparation payments.  Internet censorship.  Hell in a bucket.

Of course, there’s the granddaddy bad idea of all.  The bad idea that has reached a fever pitch.  The one that has central planners zealously pursuing state sponsored collapse.  You know the one…

The bad idea that central planners can create an endless supply of free money from thin air to support a growing class of dependents.  According to the central planners, if one stimmy check is good…two is certainly better.

The endless supply of free money, remember, is made possible by the tenets of Modern Monetary Theory (MMT).  Indeed, when there’s limitless money there’s no limit to the bad ideas of progressives.  But is there really limitless money? 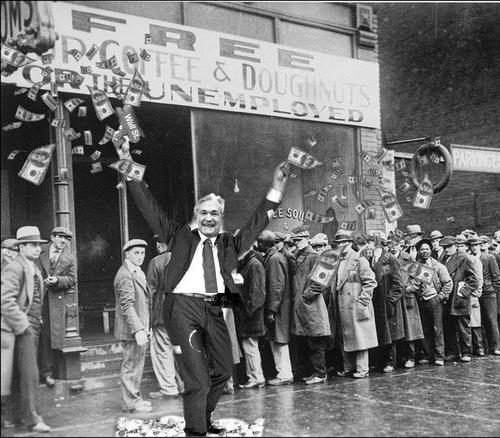 Like collective farming, we suspect MMT is bound by natural limits.  And in 2021, under the progressive guidance of Congress, we will likely start bumping up against these natural limits.  In fact, we already are…

A barrel of West Texas Intermediate crude is now over $53.  Two months ago, WTI crude was about $40 a barrel.  That’s a 32 percent increase in two months.  Is this change seasonal?  Is it geopolitical?  Is the economy booming?  Or is it something more?

According to the Bureau of Labor Statistics, the consumer price index increased by 1.4 percent over the last 12 months.  Yet while prices are rising, the U.S. unemployment rate remains at 6.7 percent.  That puts the misery index, which is the sum of the unemployment rate and the inflation rate, at 8.1 percent.

An 8.1 percent misery index may be nothing compared to the 19.72 percent notched when Jimmy Carter was in the White House.  But a misery index above 10 percent will certainly bring much weeping and gnashing of teeth.

In good time, MMT and perpetual stimmy checks will prove to be an epic failure.  Here’s why…

“Cause and effect,” said Ralph Waldo Emerson, “are two sides of one fact. … Cause and effect, means and end, seed and fruit, cannot be severed; for the effect already blooms in the cause, the end preexists in the means, the fruit in the seed.”

It’s real simple, folks.  The quality of money stems from its quantity.  The seeds of free money have been sown.  Fruits of inflation are blossoming.