S&P futures erases their drop to trade 0.3% higher as of 730 a.m. ET, tracking gains for shares across European markets, which reversed an earlier Asian loss. Emini futures fell as much as 0.6% earlier despite the successful passage of the covid relief bill late on Monday in both the House and the Senate. The S&P dropped 0.4% on Monday as optimism over the $900BN Covid-19 relief bill was offset by the emergence of a mutant variant of the virus and a frenzy of lockdowns and travel curbs to contain it. 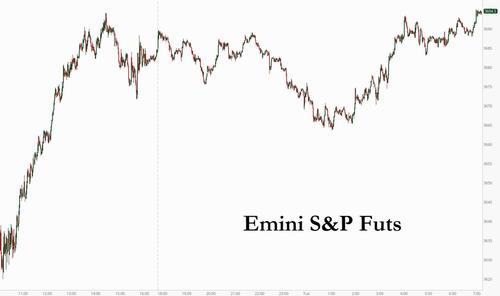 Nasdaq 100 futures outperformed the S&P 500 after U.S. lawmakers cleared a $2.3 trillion year-end spending bill and stimulus package yesterday, which now passes to President Donald Trump to sign. Treasuries and the dollar pared an earlier advance. The stimulus package, the first congressionally approved aid since April, comes as the pandemic accelerated in the United States, slowing the economic recovery.

Tuesday’s rebound follows a scare on Monday as countries across the world shut their borders to the UK because of fears over the new variant of the disease, snarling one of Europe’s most important trade routes just days before Britain is set to leave the European Union. A full lockdown came into force in London and southeast England. Europe and regions from Canada to Hong Kong have suspended travel links to the island nation, piling pressure onto the government as it tries to salvage a free-trade agreement with the European Union.

The discovery of the new strain, just months before vaccines are expected to be widely available, renewed fears about the economic impact of new lockdowns to curb the virus that has killed about 1.7 million people worldwide. In response, European shares slumped to their biggest one-day loss in nearly two months on Monday but the sentiment reversed on Tuesday after traders said Tuesday they assumed vaccines would still be effective against the new strain.

Not everyone is as cheerful, and as Bloomberg notes the global rally is looking increasingly fragile after equities touched a record high last week, as lockdowns and rising virus cases threaten to overshadow U.S. pandemic relief and the initial rollout of vaccines.

“The agreed fiscal relief package will undoubtedly help mitigate some of the negatives but unfortunately, it won’t be able to fully offset the effects of people staying at home as many businesses face tighter restrictions or are even forced to close,” according to James Knightley, chief international economist at ING Groep.

In Europe, stocks rebounded from their steepest slump in almost two months Monday, with all but one industry group in the green.  The broad Euro STOXX 600 gained 0.8%, on course for its biggest one-day jump in over five weeks. German and French indexes both added 1.3%. London’s blue chips turned positive, too, recovering early losses even as Britain adjusts to strict lockdowns imposed to curb the spread of the new strain of coronavirus. They were last up 0.3% British Airways owner IAG SA surged as much as 5.5% as travel shares bounced back. Crude oil edged lower for a second day.

Earlier, MSCI’s index of Asia Pacific shares ex Japan fell 0.8%, dragged down by Hong Kong’s Hang Seng Index and China’s benchmark CSI300 Index Asian stocks were headed for their first three-day slide since October. All industry groups were in the red, with materials and energy leading declines. Indonesia’s benchmark slumped 2.3%. President Joko Widodo announced a revamped cabinet as the government fights Southeast Asia’s worst coronavirus outbreak. Main indexes in China, South Korea and Japan also fell by more than 1.5%. Taiwan’s benchmark slid after a report of the island’s first locally-transmitted infection since April. India’s major gauges swung to gains after slumping about 3% on Monday. Thailand’s SET Index also rebounded from a 5.4% plunge the previous day, its worst since March. New Zealand’s key stock gauge was the strongest performer in the region, rising 1.9%, driven by a rebound in a2 Milk.

In FX, the stimulus news helped prop up the dollar index, which was on course for a third consecutive quarterly loss and had dropped some 12.5% from a March peak. The dollar advanced as thin liquidity and haven demand continued to dominate moves in FX and fixed-income markets against a backdrop of Brexit uncertainty.  The Bloomberg Dollar Spot Index rose a third day as the greenback advanced versus most Group-of-10 peers, though trading ranges were tighter than yesterday; the euro slipped, nearing $1.22

Sterling was down 0.2%, after tumbling as much as 2.5% versus the dollar on Monday to a 10-day low as currency traders weighed twin fears over COVID and Brexit. It slumped just around 5am ET when the EU rebuffed Prime Minister Boris Johnson’s latest concessions on fishing rights, keeping the pound lower. Analysts remain pessimistic on the pound’s prospects, even after it recovered on Monday some of its losses on media reports of progress in Brexit trade negotiations. MUFG said in a note to clients it expected London and Brussels would strike a last-minute deal, but added: “Even if a trade deal is reached, upside potential for the pound will now be dampened by recent negative COVID developments in the UK.”

In commodities, oil prices dropped on expectations of lower demand, with Brent 1.6% lower at $50.09; gold was roughly unchanged last trading at $1874.

Looking at today’s calendar, we get the second revision to Q3 GDP as well as the November existing home sales report. CarMax is reporting earnings

Asian equities saw a subdued session following a somewhat mixed Wall Street handover, after the S&P 500 and Nasdaq ended the session well off lows and the Dow eked mild gains. Meanwhile, Tesla shed 6.5% on its S&P debut, with some of the losses emanating from source reports that Apple is looking at electric vehicle production as early as 2024 which could also have its own novel “monocell” battery tech. US equity futures meanwhile drifted lower as markets awaited the State-side COVID relief and government funding package to make its way through Congress. Back to APAC, the overall sentiment was lacklustre, with losses in the ASX 200 (-1.1%) led by the basic resources and energy sectors, whilst upside for the Nikkei 225 (-0.6%) was hampered by recent JPY-dynamics. South Korea’s KOSPI (-0.5%) held onto losses as the rising COVID case count in the country surfaced reports of tourist location closures in a bid to stem the spread. Elsewhere, Hang Seng (-0.3%) and Shanghai Comp. (-0.2%) conformed to the losses across the region and as tensions with Washington brew in the background, with the Trump admin poised to publish a list of 103 Chinese and Russian companies with alleged military ties, whilst Secretary of State Pompeo announced additional restrictions on visas for officials of the Chinese Communist Party linked to human rights violations. Finally, 10yr JGB futures are flat as it tracks similar price action in UST futures.

European equities (Eurostoxx 50 +1.0%) have extended on opening gains in a retracement of some of yesterday’s heavy losses. From a European perspective, markets await updates from the EU negotiator on Brexit discussions after talks of a compromise on fisheries last night were rebuffed by the EU side and further sources on the matter this morning seemingly keeping the prospect of an agreement alive. Across the pond in the US, futures are relatively unchanged, with a slight positive bias, as the widely-expected news that Congress has approved the spending bill and COVID relief package has been unable to bolster sentiment. All major sectors in Europe trade higher with outperformance seen in banks, retail and tech names, whilst telecoms and basic resources post more modest gains. The underperformance of the latter has acted as a headwind for the FTSE 100 (+0.1%) which lags peers after yesterday’s relatively outperformance. Additionally, index-heavyweight AstraZeneca (-1.3%) are softer on the session after its 48-week Phase III trial of Tezepelumab did not meet its primary endpoint. Airline names such as Air France (+4.3%), easyJet (+3.7%) and IAG (+4.1%) have been granted some reprieve, albeit concerns continue to linger around the sector after Germany announced today that it has extended its ban for travellers from Britain until January 6th in an attempt to stop the spread of the new COVID-19 strain. Asides from the above, corporate updates in Europe have been on the light side as markets wind down for Christmas. Stateside, the WSJ reports that Facebook and Google have agreed to team up against potential antitrust action.

In FX, not much retail therapy for the Aussie, even though the lifting of restrictions and lockdown in the state of Victoria boosted consumption last month, as Aud/Usd topped out ahead of 0.7600 and is now hovering around 0.7550. However, favourable crosswinds are keeping Aud/Nzd underpinned around 1.0700 as the Kiwi fades from just above 0.7100 vs its US counterpart towards 0.7050.

In commodities, WTI and Brent are hampered this morning with concern remaining on the demand-side implications of enhanced lockdown restrictions and the halting of flights to/from the UK and South Africa. Currently, the benchmarks are exhibiting losses in excess of 1.0% but are around USD 1.00/bbl from their session lows seen around the entrance of European participants this morning. Fundamentally, news explicitly for the complex has been very sparse and nothing has occurred which significantly changes the narrative thus far. In the session ahead the weekly private inventories will be published as normal, unaffected by the holiday period, and for reference last week the report showed a build of 1.97M in comparison to the week’s EIA equivalent which printed a draw of 3.135M. Moving to metals, spot gold and silver are currently in proximity to the U/C mark, in contrast to the sessions fairly broad range of USD 20/oz for gold, but still retains a slight negative bias given the USD’s continued modest strength.

“Here Are The Superheroes To Come And Save Us All”: Media Waste No Time Fawning Over Biden