S&P futures surged and most Asian stocks climbed (Europe remains closed for Easter holiday) as investors digested Friday’s unexpectedly strong jobs report which showed the strongest jobs growth in seven months and could mark the beginning of the best annual economic growth in nearly four decades. Bond yields rose modestly after Friday’s spike, while the dollar and gold were both unchanged. 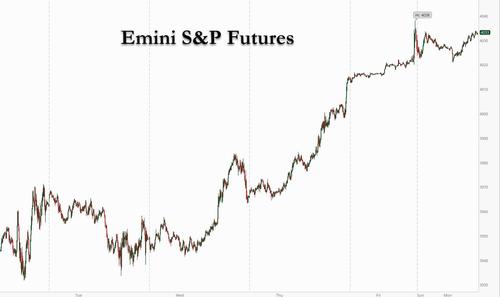 Futures tracking the small-cap, domestically focused Russell 2000 jumped about 1.5% as Friday’s report showed U.S. nonfarm payrolls surged by 916,000 jobs in March, well above 647,000 forecast by a Reuters poll of economists. Treasuries pulled back from a selloff last week, with the benchmark 10-year yield steadying around 1.71%. The pound appreciated to a two-week high against the dollar as Prime Minister Boris Johnson pushed ahead with plans to reopen the economy.

Shares of U.S. banks, industrial and material firms including Bank of America, JPMorgan, Boeing and Dow which are poised to benefit from an improving economy, firmed about 1% each in premarket trading.

In notable pre-market moves, Tesla soared 7.6%, adding $50BN to its market cap, after the world’s most valuable carmaker posted record deliveries, as solid demand for its electric cars offset the impact of a global shortage of chips. Tesla delivered 184,800 vehicles globally during the first quarter of 2021, above estimates of 177,822 vehicles, according to Refinitiv data. Tesla’s shares were at $711 before the bell, while other EV makers, including NIO Inc, Workhorse Group and Xpeng Inc were up about 3%. 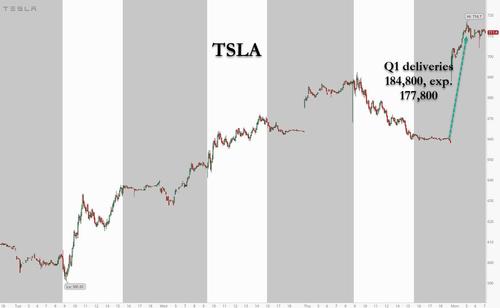 On the other end was Gamestop, which tumbled after the company announced a 3.5 million “at the money” stock offering 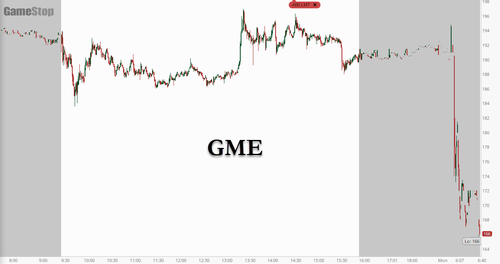 “The (EV) sector looks primed to resume its march higher, considering the surging demand for EVs in China, Europe, and the U.S. Tesla’s delivery numbers could be the spark needed to jumpstart the next rally,” said Jesse Cohen, senior analyst at Investing.com.

As Bloomberg notes, investors will be following the debate over President Joe Biden’s $2.25 trillion infrastructure proposal, as Republicans expressed guarded support for a more limited plan. The response so far in bond markets has been muted, with inflation concerns easing amid doubts over the viability more-generous spending, even as central banks remain committed to keeping interest rates lower for longer.

“The repricing of inflation risk and U.S. rates, which will impact discount rates of future earnings and the way stocks are being valued, is a source of uncertainty,” said Johanna Chua, Asia Pacific chief economist for Citigroup Global Markets.

There was some more encouraging news on the vaccine front, where China was ramping up its vaccination push, aiming to be twice as fast as the U.S. Meanwhile, a leader of the World Health Organization’s program said the rollout of shots will be expanded to 100 countries in the next couple of weeks, from 84 at present.

While many markets were closed for holidays, including China and Hong Kong, as well as much of Europe, the MSCI benchmark of Asian stocks ex-Japan advanced, with increases in Japan and South Korea. India stocks slumped the most in five weeks, bucking strength in some other Asian markets in a holiday-shortened week, as investors weighed the impact of a resurgence in virus caseloads on companies’ earnings.

Asia’s third-biggest economy posted more than a record 100,000 daily cases over the last 24-hours, an increase that pushed its richest state, Maharashtra, to order offices to work from home and shut malls and restaurants through April. “A sharp spike in coronavirus cases in the country and resultant restrictions are likely to dent investors’ sentiments in the near term,” said Binod Modi, head of strategy at Reliance Securities. Stricter movement rules in Maharashtra do not augur well even as that move is unlikely to create any supply chain issue, he added. The S&P BSE Sensex fell as much as 2.1%, the most since Feb. 26, and traded 1.9% lower as of 10.11 a.m. in Mumbai, again facing resistance around its 50-day moving average. The NSE Nifty 50 Index also dropped by a similar magnitude. Seventeen of 19 sector sub-gauges compiled by BSE Ltd. retreated, led by measures of banks and financial companies.

In FX, the Bloomberg Dollar Spot Index edged up 0.1%, set for the first increase in three days, as trading resumed in Asia after most major financial markets were closed Friday for holidays. Trading was relatively muted as a number of nations including China and Australia are still shut. “The current state of play, including upbeat U.S. data alongside bullish fiscal plans, are more likely than not to keep the U.S. dollar’s edge intact,” said Vishnu Varathan, head of economics and strategy at Mizuho Bank Ltd. in Singapore. The pound led an advance across Group-of-10 peers before Boris Johnson outlines his plan to reopen the economy later Monday; Scandinavian currencies underperformed.

In rates, Treasuries hold most of the losses incurred during Friday’s shortened session, while the curve steepens as 30-year yields cheapen an additional ~2bp vs Friday’s close. However, as with equities, trading has been light, however, with markets including London, Australia, China and Hong Kong on holiday. In short-term rates, eurodollar futures are little changed, continuing to price in a Fed rate hike by the end of 2022 as result of the sharp selloff spurred by strong March jobs report. Treasury 10-year yields around 1.725%, slightly cheaper vs Friday close, while futures trade around 131, near bottom of Friday’s range; long-end weakness steepens 5s30s by ~3.5bp.

In commodities, oil was modestly lower after jumping on Friday when OPEC+ leaders decided to boost production by less than expected.

Investors will get a fresh glimpse of the U.S. economic health in the form of ISM’s survey of the services sector, which accounts for more than two-thirds of U.S. economic activity. The data is due at 10 a.m. ET.

A quick look at Asian markets courtesy of Newsquawk

Asian equity markets traded mixed as some in the region digested last Friday’s blockbuster US jobs report in which NFP topped estimates at 916k vs. Exp. 647k and the Unemployment Rate declined to 6.0% from 6.2%, but with sentiment restricted by holiday closures for Easter Monday and the Qingming Festival. Nikkei 225 (+0.8%) was the outperformer and surpassed the 30k milestone as it sustained the momentum from the recent currency weakness and following upgrades to Japan’s Final Services and Composite PMI data for last month. The KOSPI (Unch.) was choppy amid concerns of a fresh COVID-19 wave after South Korea recently reported a 5th consecutive day of 500+ infections although LG Electronics was among the notable gainers after it decided to exit its loss-making smartphone business, while Indian markets underperformed with the NIFTY 50 (-2.3%) pressured after India reported a record increase of COVID-19 cases which rose by over 100k for the first time ever and amid the lockdown announcement for the Maharashtra state. Elsewhere, the rest of the Asia-Pac region remained quiet due to mass global closures for Monday including Australia, New Zealand, China, Hong Kong, Taiwan, UK and European markets. Finally, 10yr JGBs were marginally higher and back above the 151.00 level amid the BoJ’s presence in the market whereby it lifted the purchase amounts of JGBs as it had previously flagged and which will be at the expense of the frequency of its operations, while T-note futures remained pressured whereby prices oscillated around 131.00 amid higher yields post-NFP blockbuster data.

Coming Soon To Coinbase: Earn 7.5% Interest On Your Ethereum