While every TikTok-ing Millennial and their emotional-support-rabbit has been glued to the meltup in heavily-shorted stocks like GME (and the meltdown in the hedge funds who were heavily-short), there has been significant impacts under the covers of the rest of the financial markets that few have (for now) noticed.

Yes, FANG stocks (and the most liquid names held by hedgies) have seen liquidations to meet margin calls, the outsized influence from the booming video-game retailer has altered some ETF compositions and is forcing what Citi analysts call “ad-hoc rebalances and strategy adjustments.”

In a rather stunning move, Bloomberg reports that investors have pulled roughly $700 million from the SPDR S&P Retail ETF (XRT) this week, draining total assets to just $164 million. 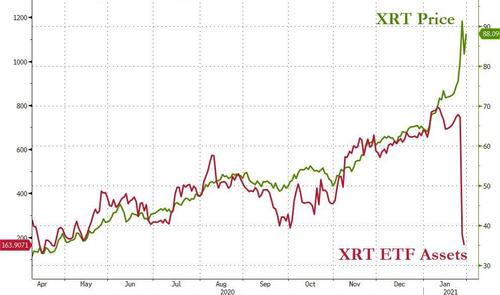 The outflows come after GameStop’s surge swelled its weighting in XRT to 20% – given that the fund tracks an equal-weighted index, the video game retailer’s weighting should be closer to 1%.

Bloomberg notes that theories abound as to what motivated the outflows, given that they happened alongside a nearly 20% rally in XRT this week alone.

One possibility is that because XRT redemptions are delivered in-kind – meaning that its shares are exchanged for the underlying stocks in the fund – investors are ditching the ETF to get their hands on hard-to-borrow GameStop shares.

“The in-kind redemption was likely an attempt by investors to get their hands on scarce GameStop shares.”

Others posit that with such a heavy weighting to the highly volatile GameStop, some holders may be choosing to take profit.

“Anyone who was long XRT BEFORE all this started had a reason. Whatever that reason, it WASN’T to gain from a mechanical pop in a meme stock that happened to be inside,” Dave Nadig, chief investment officer at data provider ETF Trends, wrote in an email. “So it’s pure 100% profit taking.”

Additionally, as Citi’s Scott Chronert recently wrote, GME’s sharp move in the past month “has increased its prominence in a variety of ETFs. Users of the ETFs highlighted within, whether for long or hedging purposes, should be aware of the outsized influence that GameStop’s price action can have on their positions.”

Citi also warned to “take special note of ETFs that incorporate leverage.” The bank screened for ETFs with a greater than 3% exposure to GME and found that Niche Thematic, Equal Weight Industry, and differentiated, more concentrated Small Cap portfolios stand out. Among the ETFs highlighted are the following”

In parting, the bank cautions that “rebalance dates should be considered when assessing the GameStop influence going forward”, urging clients to “note the ETFs where GameStop has become a much larger allocation following its sharp move. This may significantly change fund performance and use case suitability until rebalance dates.”

Simply put, the fallout from GME (and others) runs this week is far from over as even potentially ‘passive’ investors face dramatically increased volatility.