The mega squeeze in Gamestop shares continued on Monday morning, which as a reminder has short interest higher than its float.

Emboldened by Friday’s frantic surge which made “the Big Short” Michael Burry even richer, aggressive reddit and Robinhood daytraders continued to press their historic squeeze of the trapped shorts, and on Monday GME stock exploded higher, more than doubling from its Friday close and hitting an all time high of $136.63 – representing a market cap just shy of $10 billion – before fading some of gains and currently trading at $95. 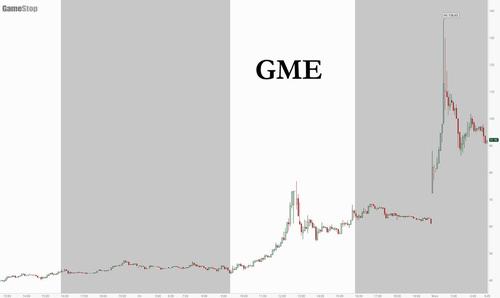 And as the mauling of professional shorters continues, and as rabid investors look for the short squeeze, we expect the many of the names we listed on Friday as the most likely squeeze candidates – those Russell 3000 stocks with a short interest at 50%+ of float – are set to continue their surge.

In fact, one of the listed companies, distressed movie chain AMC is already sharply higher on Monday morning, following a report that its CEO and President Adam Aron said that “any talk of an imminent bankruptcy for AMC is completely off the table,” after the company raised an additional $917 million for capital infusion. 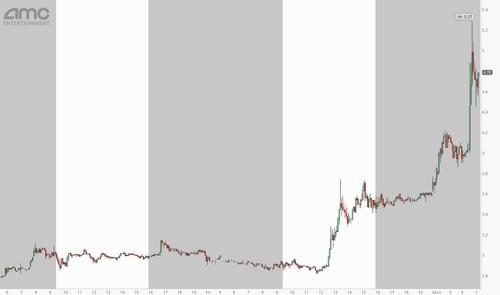 As Bloomberg adds, of this total AMC has already raised $506m of equity, from the issuance of 164.7m new common shares, and previously announced $100m of additional first-lien debt with the concurrent issuance of 22 million new common shares to convert $100m of second-lien debt into equity. Executed commitment letters for $411m of incremental debt capital in place through mid-2023. Existing liquidity would extend operations through to July 2021

If attendance levels increase, company sees existing liquidity, together with proceeds it anticipates receiving under continuing at-the-market equity program and additional landlord concessions, would be sufficient to fund operations during the remainder of 2021

Requires attendance levels achieve about 10% of pre-Covid 2019 attendance levels during 1Q, 15% during 2Q, 65% during 3Q and 90% during 4Q. The company also presumes it will continue to make progress in its ongoing dialogue with theatre landlords about the amounts and timing of owed theatre lease payments

Most importantly, depending on which data source one uses, the AMC short interest is anywhere between 40% and 58% of float, so expect much more pain for the shorts here.